The United States will impose sanctions on three leaders of Iran-backed Iraqi militias that have committed human rights abuses against Iraqi protesters. 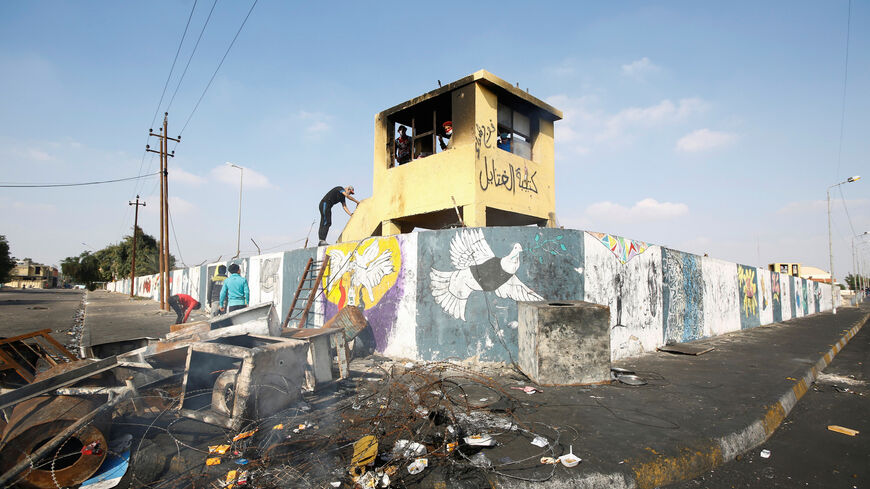 Linking Iran-backed Iraqi militias to violence that has killed over 400 Iraqi protesters, the State and Treasury departments announced that the United States will impose sanctions on three militia leaders for gross human rights abuses as well as a Sunni businessman for allegedly bribing officials.

“The Iraqi people want their country back,” Secretary of State Mike Pompeo said in a statement announcing the designations. “They are calling for genuine reform and accountability and for trustworthy leaders who will put Iraq’s national interests first. Those demands deserve to be addressed without resort to violence or suppression.”

The Treasury Department’s Office of Foreign Assets Control designated Qais al-Khazali, the leader of the Asaib Ahl al-Haq militia; his brother, Laith al-Khazali, another Asaib Ahl al-Haq leader; and Husayn Falih Aziz al-Lami. The three are leaders of “Iran-backed militias in Iraq that opened fire on peaceful protests, killing dozens of innocent civilians,” the Treasury Department said in a press release. Also designated was a Fallujah-based Sunni Iraqi businessman, Khamis Farhan al-Khanjar al-Issawi, for “bribing government officials and engaging in corruption at the expense of the Iraqi people.”

The top State Department Middle East official said three of the Iraqis designated today were directed by the Iranian regime to commit violence against protesters.

“Iraqis are also demanding their country back,” David Schenker, assistant secretary of state for Near Eastern affairs, told journalists at the State Department. “Three of today’s designees — al-Lami, Qais al-Khazali and Laith al-Khazali — were directed by [the] Iranian regime when they or the armed groups they lead committed serious human rights abuses. Iraqis have paid a steep and bloody price for the malign influence of the Iranian regime.”

“We see in the process of establishing a new government or determining who the next prime minister will be that Qasem Soleimani is in Baghdad working this issue,” Schenker said, referencing the leader of Iran’s Islamic Revolutionary Guard Corps' Quds Force. “This is not normal. This is not reasonable. This is unorthodox, and it is incredibly problematic, and it is a huge violation of Iraqi sovereignty."

Schenker said there had been a pattern of increasing Iran-backed aggression in Iraq and around the region in response to the Donald Trump administration’s maximum pressure campaign on Iran.

“The past five, six months, Iran has become increasingly more aggressive,” Schenker said. “There is a trajectory, right, where they have first increased the operational tempo of the Houthis against the Saudis, then raised the rhetoric and the temperature in Iraq against US personnel … [to] most recently … targeting directly with their own missiles Saudi oil facilities.”

Asked if that was the outcome the United States was seeking, Schenker said that it may get worse before it gets better.

“The pressure campaign is working,” he said. “They are clearly under fear and pressure, and they are lashing out.”