US lawmakers are preparing sanctions as Tehran presses Baghdad to form a government friendly to its interests. 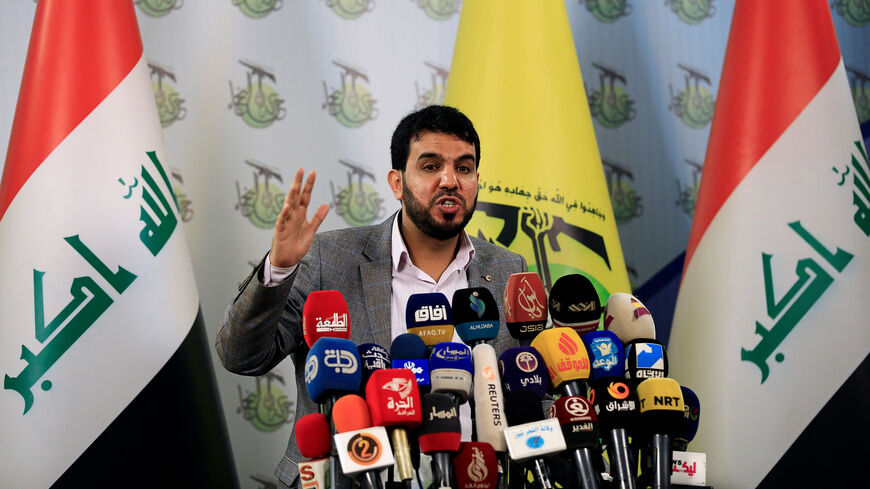 Congress is once again trying to reduce Iran's influence in Iraq in a way that could jeopardize the country's efforts to form a new government following May legislative elections.

The House Foreign Affairs Committee is scheduled to vote Thursday on bipartisan legislation that would block the assets of Iranians found to pose a threat of violence in Iraq. Meanwhile Sen. David Perdue, R-Ga., has introduced a bill to sanction two Iran-backed Shiite militias in the upper chamber.

“I’m proud to introduce this legislation and send a strong message that we will not tolerate the destabilizing efforts of the Iranian regime when it comes to the government of Iraq,” the House bill's sponsor, Rep. Adam Kinzinger, R-Ill., said in a statement when he introduced the Preventing Iranian Destabilization of Iraq Act in December.

The House unanimously passed similar legislation to Perdue's earlier this year as an amendment to the defense authorization bill. But the provision from Rep. Ted Poe, R-Texas, was dropped when the bill was merged with the Senate version.

“My amendment sanctioning Asaib Ahl al-Haq and Harakat Hezbollah Nujaba, two of the most destabilizing Iranian-backed militias in Iraq with American blood on their hands, passed the House unanimously,” Poe told Al-Monitor in an emailed statement today. “Removing the provision was a mistake and only emboldens these Iranian-backed terrorist groups.”

The Iraqi Embassy in Washington declined to respond to repeated requests for comment.

However, public disclosure forms indicate that Iraq's lobby shop, the Livingston Group, met with Kinzinger in January to discuss his bill. And Iraq's former ambassador, Lukman Faily, told Al-Monitor that the Perdue bill in particular could complicate Baghdad’s struggles to form a governing coalition.

“This will be seen as another example of the geopolitical increase in tension between the US and its allies on one side and Iran and its supporters on the other side,” said Faily.

The House initially passed its version of the Perdue legislation a few weeks after one of the targeted militias, Asaib Ahl al-Haq, won 15 seats in Iraq’s May parliamentary elections. The group is part of the pro-Iran Fatah coalition, which came in second and is in talks to form a coalition government with the top vote-getter, Shiite cleric Muqtada al-Sadr's nationalist Sairoon coalition. The other targeted militia, Harakat Hezbollah al-Nujaba, did not field any candidates.

“At the very least, [Asaib Ahl al-Haq] bought one Cabinet member in the Iraqi government,” Michael Knights, a senior fellow at the Washington Institute for Near East Policy, told Al-Monitor. “Not a major one like defense, interior, finance, none of those. The worst that can happen is that [the group] will control a junior ministry in the Iraqi Cabinet.”

Still, the Perdue bill could place the United States in the unenviable position of sanctioning an Iraqi government official.

“They are no longer in the fringe of politics,” Faily said. “Such a legislation, if implemented, will have ramifications within our internal politics too. It will enhance polarization and will push parties and blocs to take sides with or against such sanctions. [Asaib Ahl al-Haq] is now part of our democratic setup and hence its effect will be visible and for all to see and feel, more so if they take part as ministers within the next Cabinet formation.”

Knights confirmed that the potential sanctions have caused considerable consternation among Iraqi politicians across multiple sects and ideologies. Knights himself favors holding off on the sanctions until Baghdad forms a new government and recommends narrowly targeting figures such as Asaib Ahl al-Haq leader Qais al-Khazali, who is a member of parliament himself.

Knights said he asked every single Iraqi official he met during a June trip to the country — from Prime Minister Haider al-Abadi on down — about the wisdom of sanctioning Asaib Ahl al-Haq and Khazali himself.

Knights also said that many fighters were not involved in the surge of violence targeting US soldiers following the 2003 invasion of Iraq and joined the group more recently in 2014 to fight the Islamic State. He said the Trump administration has the authority it needs to enact the sanctions laid out in both the Kinzinger and Perdue bills.

Indeed, the Trump administration has started to ratchet up the pressure on Tehran’s proxies throughout the Middle East as part of a hard-line strategy against Iran.

Following two separate rocket attacks earlier this month — one on an airport in Basra, which hosts a US Consulate, and another in Baghdad’s Green Zone, where the US Embassy is located — the White House placed the blame on Iran and its Iraqi militias, without offering evidence.

“Iran did not act to stop these attacks by its proxies in Iraq, which it has supported with funding, training and weapons,” White House Press Secretary Sarah Sanders said in a statement. “The United States will hold the regime in Tehran accountable for any attack that results in injury to our personnel or damage to United States government facilities.”

Asked today about US plans to counter Iranian influence in Iraq, Pompeo said the United States has “been working to achieve a government that is an Iraqi national government.” He added, “We are working diligently to make sure that the Iraqi people — that voice they gave during the election — is who ends up in leadership.”

The rocket attacks came after Reuters reported in August that Tehran had given ballistic missiles to its Iraqi proxies, citing Iranian, Iraqi and Western officials.

“Iran’s willingness to transfer these missiles to its Iraqi agents is a measure of its involvement in these forces,” Behnam Ben Taleblu, a research fellow at the hawkish Foundation for Defense of Democracies, told Al-Monitor. “The US should determine which militias received these weapons and designate them” for liaising with the Islamic Revolutionary Guard Corps.

Ben Taleblu also noted that the missiles may end up in Syria “since much of Iran’s infrastructure has gone up in smoke there.”

Both militias targeted by Perdue's bill fight alongside Iran in Syria on behalf of the Bashar al-Assad government.