The House unanimously voted to sanction two Iran-backed militias in Iraq, one of which just won more than a dozen parliamentary seats. 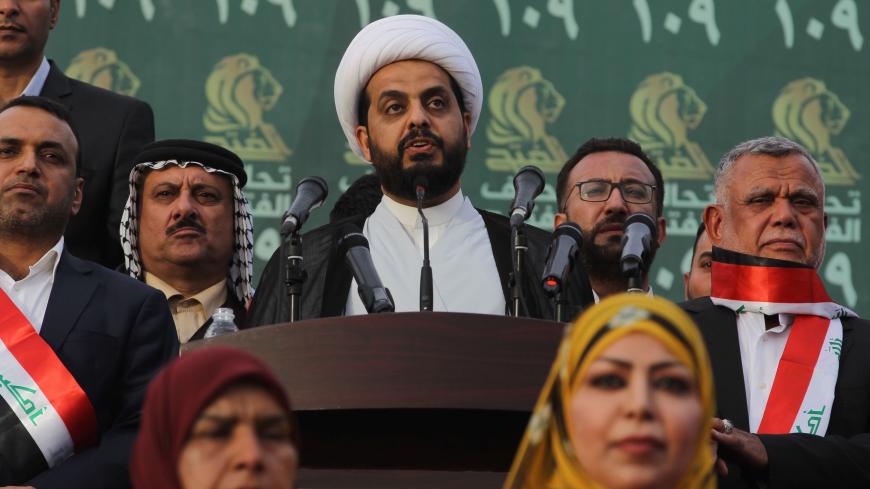 Qais al-Khazali (C), leader of Asaib Ahl al-Haq, one of the militias in the Popular Mobilization Units, speaks during a campaign rally for the Fatah coalition of Iranian-supported militia groups, in Baghdad, May 7, 2018. - GETTY/Ahmad al-Rubaye

As parliamentarians in Baghdad work to form a new governing coalition in the wake of this month’s elections, their counterparts in Washington are seeking to sanction more than a dozen of the Iraqi legislators over their links to Iran.

The House of Representatives unanimously voted last week on legislation requiring President Donald Trump to sanction “persons that are officials, agents, affiliates of or owned and controlled by” two prominent Iran-backed militias that operate in Iraq and Syria. The amendment from Rep. Ted Poe, R-Texas, to a must-pass annual defense authorization bill targets Asaib Ahl al-Haq and Harakat Hezbollah al-Nujaba, both of which are part of the Shiite-led Popular Mobilization Units battling the Islamic State.

Both militias joined with other Iran-backed military forces as part of the Fatah, or Conquest, political coalition, which came in second in the May 12 elections with 47 out of 329 parliamentary seats. Asaib Ahl al-Haq won 14 of those 47 seats, according to Iraq analyst Kirk Sowell, while Harakat Hezbollah al-Nujaba did not field any candidates.

“The US Department of Treasury will ultimately determine if the political wing constitutes an affiliate or entity controlled by” Asaib Ahl al-Haq, a Poe aide told Al-Monitor. “Congressman Poe believes [Asaib Ahl al-Haq] will likely be subject to these penalties unless it completely breaks all ties with the armed wing, renounces violence and acts solely as [an] Iraqi political party with no backing from Iran.”

“Political parties are about engaging in peaceful civil discourse, not about representing armed thugs who commit violent atrocities to achieve political ends,” the aide added.

The Trump administration has taken an increasingly hawkish approach to Iran following the US withdrawal from the nuclear deal earlier this month, vowing to go after Iran’s proxies throughout the region. If it so chooses, however, the administration has some wiggle room to avoid sanctioning the 14 new Asaib Ahl al-Haq lawmakers as Iraqi law requires political parties to formally separate themselves from the militias. However, the parties retain the same names as their respective militias and Asaib Ahl al-Haq’s leader, Qais al-Khazali, has landed a seat in parliament. 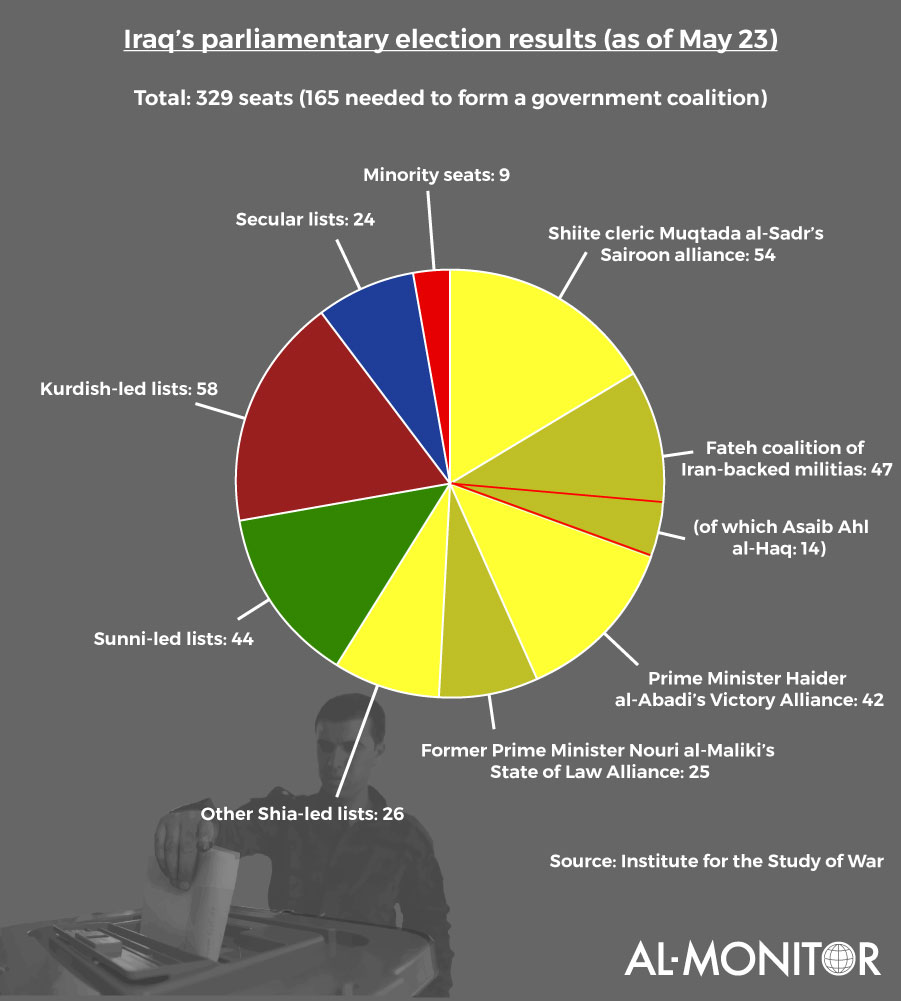 The Iraqi Embassy did not respond to Al-Monitor’s inquiries about its positions on the provision.

After Poe introduced similar legislation last year, a Harakat Hezbollah al-Nujaba spokesman denounced the bill as a “conspiracy and victory for the Islamic State and all other terrorist organizations supported by Washington.”

Despite the conspiratorial rhetoric, both the Asaib Ahl al-Haq and Harakat Hezbollah al-Nujaba militias formed an alliance of convenience with the United States during the fight against the Islamic State. Previously, both groups had battled US forces following the 2003 invasion of Iraq with the backing of Iran’s Islamic Revolutionary Guard Corps (IRGC). The United States has sanctioned the leader of Harakat Hezbollah al-Nujaba, Akram al-Kaabi, since 2008.

Despite Washington’s fear of growing Iranian influence in Iraq, Shiite cleric Muqtada al-Sadr’s nationalist Sairoon Alliance won the most seats. He is now working with Prime Minister Haider al-Abadi’s Nasr (Victory) coalition in an attempt to establish a new government, even as disgruntled parties are demanding a recount.

While Sadr previously directed the Mahdi Army against US troops following the 2003 invasion, he is also critical of Iranian influence in Iraq. This has prompted IRGC commander Qasem Soleimani to coordinate with pro-Tehran parties in Baghdad as a bulwark against Sadr.

Other than potential sanctions on the 14 Iraqi parliamentarians, it remains unclear how much of an impact such measures would actually have on Washington’s ability to do business with Baghdad as Iraqi politicians attempt to create a new coalition.

“The most meaningful impact of sanctions like these is often less on the direct targets and more on their environment,” Nathaniel Rabkin, the managing editor of the newsletter Inside Iraqi Politics, told Al-Monitor. “The more Iraqi entities and persons you sanction, the more US businesses will be cautious about doing business in Iraq more generally and the more carefully they’ll be vetting Iraqi partners.”

The Senate Armed Services Committee advanced its own draft of the annual defense bill last week, but has not publicly released the text.