Asaib Ahl al-Haq and the Hezbollah Brigades have dismissed the effectiveness of possible new US sanctions against them and claim they might even be helpful. 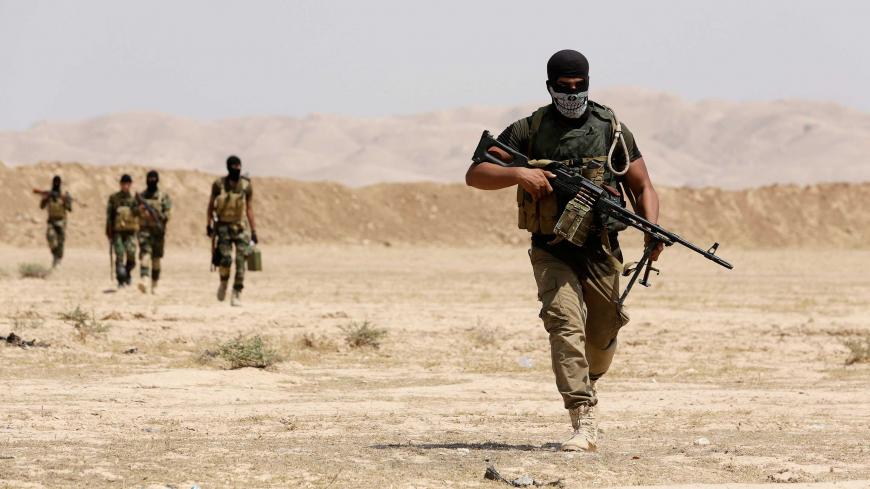 Fighters from the Shiite Asaib Ahl al-Haq militia from southern Iraq and Kurdish peshmergas walk with their weapons as they take control of Sulaiman Pek from Islamic State militants, northwest of Tikrit, Sept. 1, 2014. - REUTERS/Youssef Boudla

Two pro-Iranian militias active in Iraq and Syria declared that possible US sanctions targeting them would be ineffective and claimed that such sanctions would actually strengthen their presence and expansion in the Middle East. The US House of Representatives on May 24 passed sanctions against Asaib Ahl al-Haq and Harakat Hezbollah al-Nujaba as an amendment to annual defense legislation. The bill called for sanctions against “persons that are officials, agents, affiliates of or owned and controlled by” the two groups.

Laith al-Azari, a member of Asaib Ahl al-Haq's political bureau, said on May 30, “Including Asaib Ahl al-Haq, along with some other Iraqi armed factions, on the terrorist list will increase our own ability to confront terrorism and confront US plans in Iraq.” He did not explain how sanctions could lead to this result, but sees the action as an effort to thwart the pro-Iranian axis of resistance, which includes Iraq, Syria and Lebanon, and confront Islamist movements. The sanctions vote followed US President Donald Trump's May 8 announcement withdrawing the United States from the Iranian nuclear deal, ostensibly in order to reach a better deal that would limit Iran's military power in the region.

In a May 30 interview with Rudaw, Mohammad Mohi, spokesman for the Hezbollah Brigades, played down the importance of possible US sanctions, stating, “The US decision is not new as far as Harakat Hezbollah al-Nujaba is concerned. This is not a new issue, but one that has been tackled on an annual basis.” Nujaba leader Akram al-Kaabi was sanctioned in 2008 by the Treasury Department, which designated him an individual "fueling violence" in Iraq.

Mohi linked the House vote to a decision by the Iraqi parliament three months ago obligating the Iraqi government to schedule the withdrawal of US troops from Iraq, measures supported by the two groups targeted for sanctions. While condemning foreign interference in Iraqi affairs, including the US and Turkish military presence, Mohi praised the Iranian presence, stating, “Without Iranian support, Iraq would not have defeated the Islamic State [IS]. Had it not been for Iran's support, Erbil would have fallen [to IS] along with Baghdad and other Iraqi cities. This is why Iran's intervention was in the interest of the Iraqi people, and it came at a time when other countries were idly watching Iraq head toward an unknown fate.”

The House's sanctions vote followed Iraq's May 12 legislative elections, in which the political organizations of the pro-Iranian militias emerged as the second largest coalition, meaning they might have a shot at forming the new government. Asaib Ahl al-Haq looks like it will occupy at least 14 of the 47 seats won by the Al-Fateh Alliance, consisting of pro-Iran factions and headed by Hadi al-Amiri, leader of the Badr Organization. Al-Fateh came in second, behind the Sairoon Alliance, headed by the cleric Muqtada al-Sadr, which won 54 seats. There are 329 seats in the Council of Representatives.

Despite the Sairoon Alliance's lead, its position could be undermined by independent candidates. It is being reported that a number of independents will be joining the Al-Fataeh Alliance. So far, only one such candidate for Shabak, Qusay Abbas, has joined Al-Fateh after winning a seat.

Sheikh Qais al-Khazali, leader of Asaib Ahl al-Haq, expects his movement to end up with at least 15 seats once the official results are announced, following the resolution of disputes over balloting irregularities. The Badr Organization is also thinking that it will be allotted additional seats after the results are in. Meanwhile, the State of Law Coalition, another ally of Iran, won 25 seats, and is fully prepared to forge an alliance with Al-Fateh given their common political agendas.

All this means that should Al-Fateh's natural allies join it, it would beat out the Sairoon Alliance and be in a position to form a government consisting mostly of pro-Iranian factions. If this scenario transpires, the United States could find itself in the very awkward situation of having to deal with a government it is sanctioning, should the sanctions ultimately be adopted. Would the United States actually sever ties with the Iraqi government, a key partner since 2003, or, finding that scenario unpalatable, simply decide to waive or put off new sanctions?

Another scenario that might be even more difficult for the United States would see Sairoon and Al-Fateh coming together around their shared goal of US forces withdrawing from the country and curbing US influence in Iraq and the region. Before that could happen, however, big differences between the two alliances would have to be overcome. Al-Fateh opposes the United States in favor of expanding Tehran's influence in Iraq and the region, while Sairoon wants an Iraq independent of Iran, free to manage its own internal affairs and regional positions.

Of note, Israeli-Russian understandings, with US buy-in, are being concluded to keep pro-Iranian militias away from the southern border of Syria, which would, of course, undermine the Iranian role in Syria. Regardless, in terms of US interests in Iraq, it appears the United States might ultimately find itself in the dilemma of having to choose between the lesser of evils.

The spokesman for Harakat Hezbollah al-Nujaba, Hashim al-Moussawi, believes Washington launched a war on the resistance axis when it reneged on the Iranian nuclear deal and then prepared to impose economic sanctions on Hezbollah supporters. “This is an expected reaction to the losses suffered by the US by the Islamic resistance factions,” he said. “The elections in Lebanon and Iraq and the victory of the resistance [against IS in Iraq] showed the US the high level of threat it is facing.”

Moussawi touts the showing by the Al-Fateh Alliance as a victory for the Iranian axis. “This is why it [the US] is seeking to plunge Iraq into the spiral of permanent chaos,” he said. “The entry of the resistance into political circles will embarrass Washington, which is politically seeking to bypass the axis of resistance.”