With few expectations, Iraqis expressed appreciation to the UN Special Representative of the Secretary-General for Iraq Jeanine Hennis-Plasschaert for her briefing on the protests. 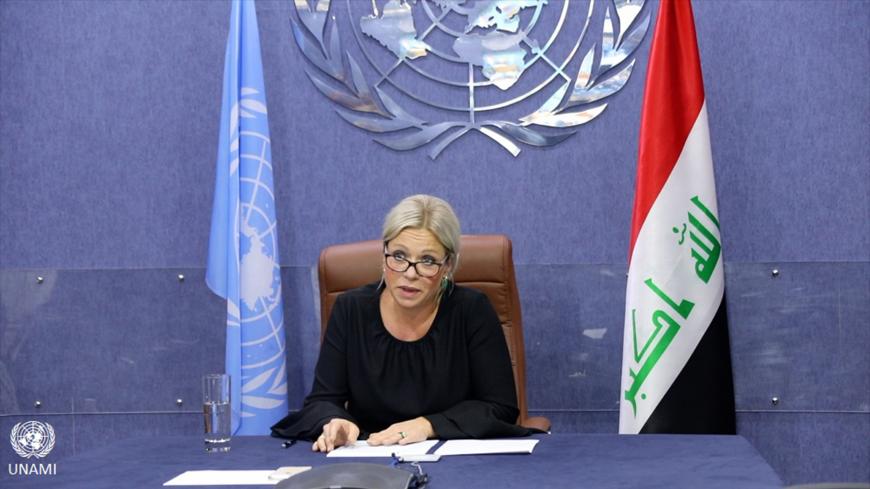 Three days after Special Representative of the United Nations Secretary-General for Iraq Jeanine Hennis-Plasschaert condemned the acts of violence against peaceful protesters and defended the right to peaceful assembly and freedom of speech in her briefing in New York, Baghdad witnessed another bloody night on Friday after armed men attacked one of Baghdad's protest centers, leaving at least 23 dead, according to police and medical sources.

Hennis-Plasschaert condemned the deliberate killing of unarmed protesters by armed elements, calling it an "atrocity against the people of Iraq." She also called for the perpetrators to be identified and brought to justice without delay.

As in her New York speech, Hennis-Plasschaert was harsh in her recent statement.

"Acts of violence that are gang-driven, arising from external loyalties, politically motivated or intended to settle scores, risk placing Iraq on a dangerous trajectory," she said in a statement published Dec. 7.

Earlier in December, the special envoy exalted the bravery of "thousands of Iraqis asking for their country to reach its full potential for the benefit of all citizens." She also lamented their "paying an unimaginable price for their voices to be heard" with over 400 people killed and more than 19,000 injured since the protests erupted in Baghdad and the southern governorates on Oct. 1.

In contrast to her earlier tweets that angered most of the pro-protest Iraqis, she frankly called on the state to minimize the use of lethal force and protect its people, describing a "harsh reality" of using "live fire, tear gas, unlawful arrests, detentions, abductions, threats and intimidation.”

This was highly welcomed by most Iraqis.

"In her last briefing, there was an obvious condemnation of Iraq's government. This indicates an American and European inclination to increase the pressure on the militias and Iranian-backed groups in Iraq," Ali Bashar, a political scientist at Bayan University in Erbil, told Al-Monitor. Bashar added, "She focused on the violations done by the unspecified, so-called third party aiming at criminalizing these parties."

Bashar thinks the United Nations, along with its envoys and representatives, serves the interests of the superpowers controlling the international organization.

"I think [the United States] is slowly approaching the Iraqi crisis. The envoy's stance was so negative at first, and it just changed all of a sudden," said Bashar.

On Dec. 6, the US Department of the Treasury’s Office of Foreign Assets Control (OFAC) named three leaders of Iran-backed militias in Iraq that opened fire on peaceful protests, killing dozens of innocent civilians. OFAC accused Qais al-Khazali, Laith al-Khazali and Husayn Falih ‘Aziz al-Lami of being involved in serious human rights abuse in Iraq. OFAC also named Iraqi millionaire businessman Khamis al-Khanjar al-Issawi for bribing government officials and engaging in corruption at the expense of the Iraqi people. Accordingly, all their property and interests in property that are in the United States or in the possession or control of US persons are blocked.

Salah al-Kanaan, a 35-year-old computer operator at a refinery company from Kirkuk, thinks the widespread social media campaign against Hennis-Plasschaert's old tweets was the most effective reason for her change of heart and a big reason why she stopped sympathizing with the government.

"She felt the danger of ignoring the demonstrators' opinions and counting on the government's support for the international organization. She felt concerned about her future rather than thinking about the people," said Kanaan.

"At least she finally did it, for without her report the international community and the Security Council would have listened only to what Iraq's government says, represented by its delegation's head, who had manipulated everything and depicted the people as a group of criminals and murderers, in a way contradicting what happened and is still happening," he added.

"Plasschaert presented a clear and just report. Soon after, Iraqi protesters in Nasiriyah and Baghdad held up pictures of her, with the message: 'Thank you for conveying the truth,'" said Khairuldeen Makhzoomi, a Washington-based, Iraqi-American analyst and graduate of Georgetown University's Center for Contemporary Arab Studies. "However, the report didn’t name or mention the groups or individuals who committed crimes against Iraqi protesters," he added.

Ameer Raad, a mechanical engineer from Babylon, welcomed the recent speech with suspicion.

"The speech was fair to the demonstrators. I think the government's brutal crackdown on the protesters, Sistani's recent sermon, the resignation of Prime Minister Adel Abdul-Mahdi and the bloody attacks in Nasiriyah and Najaf were behind her recent stance."

The special envoy referred to a "crisis of confidence" in Iraq due to "the high loss of life, the many injuries and the violence, combined with a long period of undelivered promises," noting that the packages offered by the government are often perceived as unrealistic or “too little, too late.”

This mistrust also overshadows relations between Iraqis and the UN.

"The briefing was accurate, realistic and professional. It was late, but better late than never," Zahraa al-Hasnawi, a dentist from Hillah, south of Baghdad, told Al-Monitor.

But Hasnawi isn't counting on the UN to benefit the interests of Iraqis.

"We all remember how the UN stood against us and starved us for years in the 1990s. I do not expect anything from them. It is possible that the United States, in one way or another, would take some steps to support the people," Hasnawi said.

On Dec. 5, Ammar al-Hakim, an Iraqi cleric and politician and the leader of the National Wisdom Movement, called on Hennis-Plasschaert to cooperate with parliament and assist in preparing a new election law — one of the notable demands by the ongoing popular protests.

Makhzoomi thinks the United Nations Assistance Mission for Iraq (UNAMI) should do more to help Iraq at such a critical time.

"They should support Mrs. Michelle Bachelet, United Nations High Commissioner for Human Rights, to form a committee to investigate the crimes against protestors and name them openly and clearly," Makhzoomi told Al-Monitor. "UNAMI should support equitable electoral laws that will empower Iraqi citizens and guarantee fair and just representation by conducting a census; divide Iraq into multiple electoral districts/constituencies of at least 200,000 citizens represented by a single, local elected official who was born or has resided in the district for at least four consecutive years; and prevent candidates from participating in elections in multiple constituencies in subsequent elections," he said.

While admitting the role of dictatorship in Iraq's current problems, Makhzoomi thinks Hennis-Plasschaert should more clearly emphasize the problems that were created after 2003. "One main distinction between pre- and post-2003 Iraq is Iranian interference that came through the current political class," he said.

Bashar, Erbil's political scientist, does not seem optimistic regarding the outcome of Hennis-Plasschaert's speech.

"Iraqis received the speech positively and appreciated her stance. But I do not expect anything from the UN. Even their reports are not highly important as the organization can take no action or measures against the government," Bashar said.