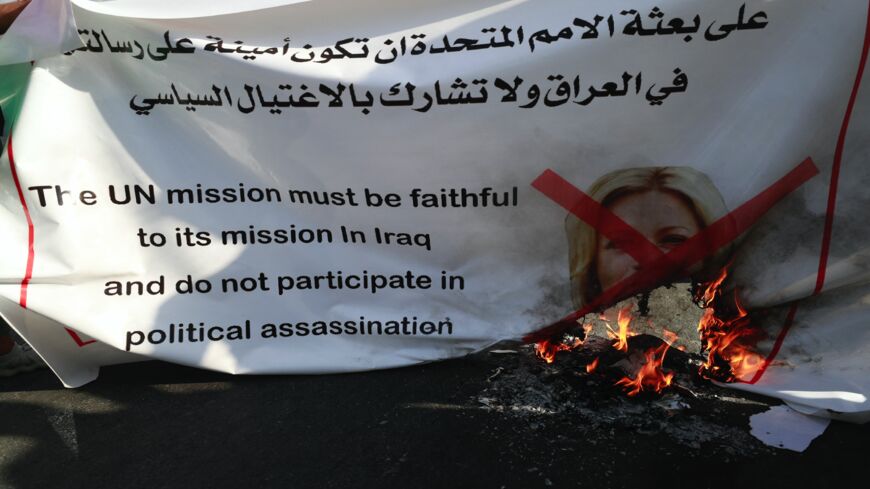 Supporters of the pro-Iran Hashid al-Shaabi alliance burn a banner bearing a crossed portrait of the special representative of the UN secretary-general's Assistance Mission for Iraq Jeanine Hennis-Plasschaert during a protest denouncing the results of Iraq's parliamentary elections and calling for a new vote in Baghdad on Oct. 19, 2021. - AHMAD AL-RUBAYE/AFP via Getty Images

BAGHDAD, Iraq — Jeanine Antoinette Plasschaert, special representative of the secretary-general for Iraq, has attended last night, Nov 18, the meeting of Coordination Framework that includes most of the political parties lost in the elections.

She has also met over the last few days with leaders of those political blocs that lost in the Iraqi elections. The meetings raised many questions, particularly since these parties blame the United Nations Assistance Mission for Iraq (UNAMI) for what they call “rigged election results."

Plasschaert met Nov. 15 with Asaib Ahl al-Haq head Qais al-Khazali. The next day, she met with former Prime Minister Adel Abdul Mahdi. The discussions were centered on the developments in the aftermath of the early legislative elections held on Oct. 10.

According to a statement by Khazali’s office, Khazali called on Plasschaert to “be a neutral party in the problems in order to overcome the current crises and prevent the country from hitting a political impasse.” The statement added, “The two sides discussed during their meeting in Baghdad political issues, mainly the parliamentary election results and their repercussions.” The statement said Khazali presented evidence on the fraud and manipulation that accompanied the elections, and he expressed surprise at the UN Security Council statement on the elections before the final results were approved. The statement stressed that  “the coordination framework,” which includes the vanquished blocs as well as former Prime Minister Nouri al-Maliki, would continue to follow up on the legal procedures in this regard. For her part, Plasschaert has been responsive and said she will study the evidence provided by Khazali.

Khazali — as well as supporters of other factions who have been protesting in front of the Green Zone in Baghdad against the election results since mid-November — accused Plasschaert of being involved in vote-rigging and described her as “the godmother of vote-rigging.” Hence, it was really surprising to everyone that she met with Khazali or was a party in the supposed settlement or mediation.

The UN Security Council had welcomed the success of the Iraqi elections after Prime Minister Mustafa al-Kadhimi's Cabinet provided all the necessary resources for its success, including security, financial and logistical support for the Independent High Electoral Commission in Iraq. The Security Council also expressed regret for “the recent threats of violence against [UNAMI] and the commission’s staff” and called on those who objected to the results to seek legal avenues.

There were several comments on the meeting between Khazali and Plasschaert, including by Iraq's Sadrist movement head Muqtada al-Sadr, who won 73 seats. Speaking to Al-Mirbad Radio on Nov. 15, Issam Hussein, a leading figure in the Sadrist movement, said that the meeting was very normal and should not be seen as part of a conspiracy or as making concessions. "The Coordination Framework is always sharply and violently criticizing the others, and the media intensifies focus on a particular person, topic or event. Hence, the meeting was the result of these pressures that conveyed the image that Plasschaert is the godmother of electoral fraud," Hussein said.

He pointed out that “Plasschaert, in turn, spread reassurance among the people and the demonstrators, and proved that she is not the godmother of electoral fraud but rather an election observer who did her work perfectly, submitted reports and sent them to the United Nations.”

According to a source close to Asaib Ahl al-Haq who requested anonymity, Plasschaert tried to dismiss the accusations that UNAMI is involved in rigging votes so that she could continue to play the role of mediator between the conflicting parties in the country, and the vanquished in the Coordination Framework could accept the mediation after the Sadrist bloc turned a deaf ear to the calls for the formation of a consensual government that involves all parties and not a political majority government, as Sadr promised his supporters before and after the elections.

For its part, the Coordination Framework blocs are seeking to market the project of Ammar al-Hakim's National Wisdom Movement through Plasschaert. The project that Hakim put forward on Nov. 15 aims to abolish the election law, end the work of the electoral commission and organize early elections two years from now, provided that a consensual prime minister runs the transitional period. All political parties outside the Coordination Framework, including the Kurdish blocs, rejected the project they described as “unrealistic.”

The more Sadr insists on forming a majority government independent of the vanquished, the more the latter escalate their protests and threats. This is while the winning blocs are waiting for the judiciary to ratify the final results of the elections in order for the largest parliamentary blocs, which are constitutionally mandated to form the Cabinet, to start the negotiations in this regard.