The head of Asaib Ahl al-Haq, Qais al-Khazali, spoke to Al-Monitor about the Iraqi organization's history with the United States and current political positions. 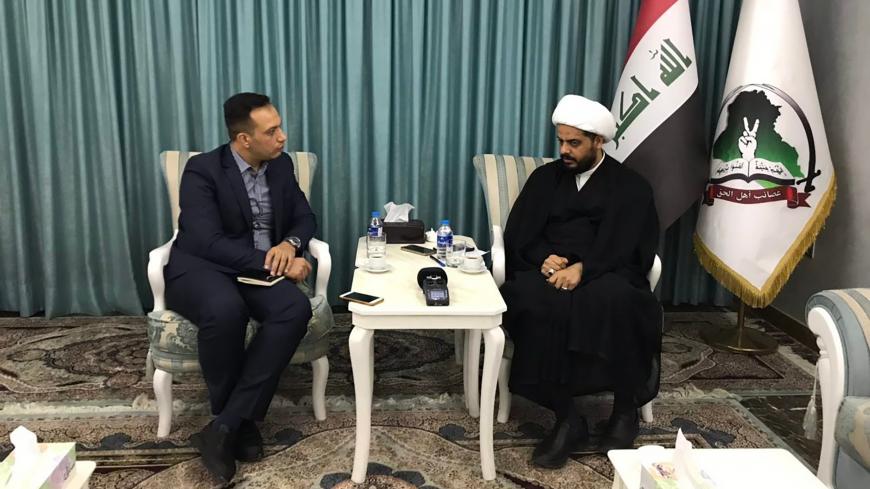 Al-Monitor’s correspondent in Iraq interviewed the secretary-general of Asaib Ahl al-Haq, Qais al-Khazali. His organization is a prominent group within the Popular Mobilization Units that participated in the May election as part of the Fatah Alliance. Khazali was taken into US custody in Iraq in 2007 and held until 2010 for his involvement with attacks against US troops.

Khazali shared his views about the formation of the new government and the US position toward his group. He also discussed Mohamed al-Halbousi, the prominent young Sunni figure who was elected parliament speaker in mid-September, and the PMU coalition that put him forward, al-Binaa. The text of the interview follows:

Al-Monitor:  What do you think about the candidacy of Barham Salih for the presidency? Is he backed by the PMU?

Khazali:  We hope that the Kurds agree on one candidate. If they remain divided and suggest two candidates, Barham Salih will have better chances at the national level in general. I would expect him to win the presidency. The [Patriotic Union of Kurdistan] had a wiser position on the [independence referendum]. Their reactions were sensible and they were courageous enough to avoid clashes, which spared people’s lives.

Al-Monitor:  Did you agree to support Halbousi as speaker of parliament? Does he have the personality required for the position?

Khazali:  Halbousi is the candidate of al-Binaa coalition, and all our votes were given to him. Voting was a good opportunity to send a message that al-Binaa is cohesive and strong. That was a strong political message to our rivals that we are the majority on the ground. Halbousi is young and has been successful at governing the Anbar governorate.

Al-Monitor:  Halbousi is affiliated with a Qatari-backed political alliance. Does this mean that you are in contact with Doha?

Khazali:  We do not have a direct relationship with Qatar. We act within Iraq's general political context, which is moving toward rapprochement with Arab countries. Our support for Halbousi results from an internal situation. We asked the Sunnis to reach a consensus and we helped them agree on one candidate.

Iraq is not against relationships with its Arab neighbors. Most of Iraq’s neighbors and the surrounding countries of the Gulf, including Qatar, negatively impacted Iraq after 2003. Yet the recent developments changed things. As opposed to Saudi Arabia, Qatar was one of the countries that found opportunities in strengthening the political situation in Iraq. A new page might be turned if Qatar maintains positive attitudes toward Iraq.

Al-Monitor:  The US Congress is trying to pass a law against you. What is your comment?

Khazali:  It is difficult to make sense of American politics under Donald Trump. Their moves do not fall under the diplomatic umbrella. This law is a mistake and is not a wise step for the US for a simple reason, which is that we did not target American interests in any other country but our own. Ideologically, we do not consider the US an infidel or its people enemies. The only thing that happened is a phase of American occupation, and it is normal for people to resist occupation. What happened was on our land, and the Security Council considered the US an occupying country. … Our cause is not ideological against the US, it is political. Their presence now is no longer as an occupation because even the military is there based on an agreement with the government. So the issue could be politically solved. All of this proves that we are not terrorists attacking Washington based on terrorist ideology. If we wanted that, we could have taken many opportunities in the past during the war on the Islamic State knowing that the only thing separating us from the embassy is the Tigris River.

The details [surrounding] passing the law are problematic. First, why didn’t they do it in 2007? This confirms that the decision has political dimensions. Second, I was a prisoner of the Americans, so why did they let me go if they consider me a terrorist? We believe that this decision is bad, and it will not be beneficial even for the US. The US is afraid of the role we might play in future governments, so it is trying to politically sideline us.

Al-Monitor:  Do you think you are capable of resisting attempts to sideline you?

Khazali:  If the motives of this law are political, it will not have any positive repercussions. America’s loud and clear meddling in Iraqi matters will not stand in the way of Asaib Ahl al-Haq’s affiliate, the Sadikoun movement, and their attempts to have members of parliament in all parliamentary committees, to actually head a parliamentary committee and to head a government ministry. If this decision is made, it will weaken Washington’s credibility in Iraq. If Washington insists, our challenge would be to insist on a sovereign ministry. How will it react to that? Will it cut ties with Iraq? We will not accept another country’s meddling in our internal affairs or its hostility in our country. We are an official party, and our members of parliament have been elected by the people.

Al-Monitor:  You are only mentioning US intervention, but what about Iranian intervention?

Khazali:  Iraq’s weak political situation has allowed many interventions. Is this [Iranian] interference harming the Iraqi state? It could be a positive influence. Some believe that American actions in Iraq could be in the country’s best interests, yet our issue is with intervention that disrespects Iraqi sovereignty. If a similar Iranian intervention happens with such audacity, we will be the first to oppose it. All the Sunni and Kurdish politicians who met with the US presidential envoy Brett McGurk reported that they were subjected to threats and insults. They also reported that he pressured them into making decisions. … Did those who met with [Quds Force head Qasem] Soleimani report the same? On the contrary, the Iranians are pushing for Iraqi cohesion, and they do not want to interfere in the decision or the choices. Comparing the role of the US to that of Iran in Iraq is unfair.

Al-Monitor:  Washington has lately published papers on your relationship with Iran saying that you were trained there. Why do you think they chose this timing? What are your comments?

Khazali:  What is new about these documents? I already talked about this publicly in the media. Between 2004 and 2011, we have had six recordings of our operations against the US military when they were in Iraq. We have around 5,000 photographed operations, and we are proud of them. As for the support from Iran, I previously mentioned that it has been openly supporting the resistance in Iraq and around the world. It is no big secret. This is proof provided by the US that the side that has been resisting them and causing them trouble is Qais al-Khazali and Asa’ib Ahl al-Haq. I am now telling Al-Monitor, a US media organization, that yes, we have resisted the US, that we were backed by Iran and that we are proud of it. When it comes to timing in publishing these documents, we know that the US official documents are only published decades later. Why now, seven years later? Why are they publishing these documents after a relatively short period of time? I think that the publication of these documents is an attempt to influence the outcome of the talks on forming the government. Washington felt the need for these leaks because it noticed it is becoming weak in Iraq. I believe the documents were a reaction, because days before they were published, I warned about US intervention and described it as insolent. I also said that McGurk will only pressure and threaten Sunni politicians to push them to support a specific candidate. The second day, we decided to support a group of activists and academics in protesting McGurk’s visit close to the Green Zone. All these steps have bothered them.

Al-Monitor:  You talked about Iranian support in resisting the US. Is Iran supporting you for the benefit of Iraq or Iran?

Khazali:  Iran would benefit from weakening the US, and we share this interest. I don’t see why not, especially we are not targeting Iraqi [civilians], just the US army.

Al-Monitor:  You are accused of coercing the Sunnis in the liberated areas under your control into voting for you. What is your comment on this issue?

Khazali:  In these areas, there is a socially harmonious and cooperative relationship between Asa’ib Ahl al-Haq and the residents. We have a good relationship with the Sunni tribes, especially those who fought IS with us. All these rumors are failed attempts. Salahuddin governorate is not only Sunni. There are three Shiite provinces, and if some of our candidates win, it would not come as a surprise. We also had Sunni candidates in these areas.

Al-Monitor:  After Hadi al-Amiri withdrew his candidacy for the premiership, who do you support, and do you have a PMU candidate?

The Fatah Alliance at least must approve of the prime minister, if not the whole al-Binaa alliance, and Sairoon at least if not the whole Reform and Reconstruction Alliance. All these stages are difficult and must meet the conditions. So far, Adel Abdel Mahdi has the best chances, and it is unclear whether another candidate accepted by all parties might emerge.

Al-Monitor:  European ambassadors have been visiting you. Is this part of mediation between you and Washington?

Al-Monitor:  A few days ago, missiles were launched on the US Embassy, and the Iranian Consulate in Basra was burned down. What is your stance?

Khazali:  We object to any attack on the diplomatic bodies of any state, even if we are at odds. Attacking diplomatic missions tarnishes Iraq’s image.

Al-Monitor:  What is this cyberwar you talk about?

Khazali:  Facebook closes any page that has my name or photo within 24 hours, and even though Twitter did not close my page, it refuses to add a blue mark to it. I do not know why this is happening. We are not a terrorist group but a political party that is represented in the Iraqi parliament and has a large public base.