The Coordination Framework is an umbrella bloc of Iraqi Shiite parties united mostly by their opposition to the Sadrist movement. 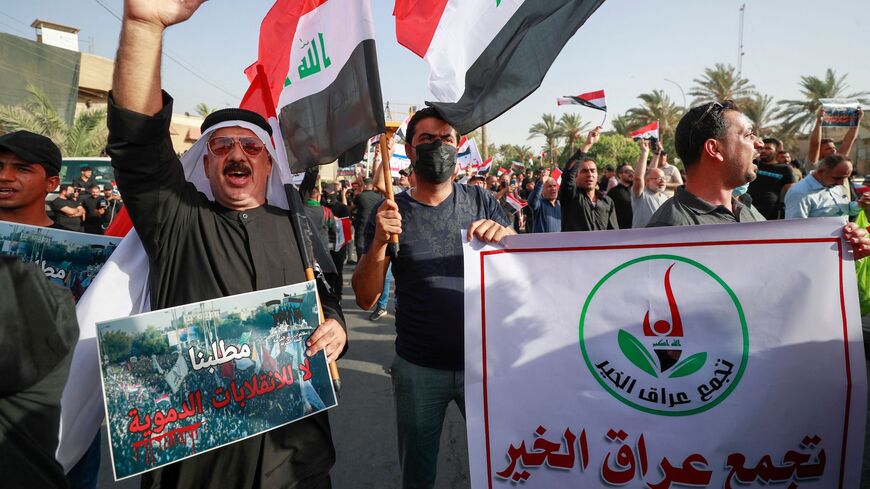 A man lifts a placard in Arabic that reads "Our demand: no to deadly coups" during a rally by supporters of Iraq's Coordination Framework outside the capital Baghdad's high-security Green Zone on Aug. 12, 2022. - AHMAD AL-RUBAYE/AFP via Getty Images

BAGHDAD — After the October 2021 elections, two main Shiite groups appeared on the Iraqi political scene: the Sadrist movement, led by the populist cleric Muqtada al-Sadr, and the Coordination Framework, which included Shiite forces close to Iran.

The Coordination Framework stymied the efforts of the Sadrist movement and its allies — the Kurdistan Democratic Party led by Masoud Barzani and the Sunni Taqaddum Party headed by Muhammad al-Halbousi — to form a government.

Selecting the president, which is an essential part of forming a government, requires a two thirds vote, and the framework was able to form a blocking third in the parliament.

The process has since been deadlocked, and has included demonstrations and protests organized by both groups, including the Sadrist occupation of the Iraqi Council of Representatives, or parliament.

The main actors in the framework

The alliance includes prominent Shiite forces such as the State of Law Coalition led by Nouri al-Maliki with 38 parliamentary seats, the Al-Fatah Alliance led by Hadi al-Amiri with 29 seats including the seats of the Asa’ib Ahl al-Haq movement led by Qais Khazali and the Alliance of National State Forces led by Ammar al-Hakim with 11 seats in partnership with Haider al-Abadi, head of the Victory Alliance, as well as the National Contract Coalition, led by the head of the Popular Mobilization Authority, Faleh al-Fayyad, with eight seats.

The bloc is also allied with the Patriotic Union of Kurdistan and the Babylon Movement led by Ryan al-Kaldani, a Christian leader of the Popular Mobilization Units, as well as some Sunni and independent representatives.

Maliki heads the Islamic Dawa Party, the head of the Iraqi government between 2006-2014. He has been Sadr's chief rival since 2008, when he launched a military campaign against his military force, the Mahdi Army.

Hadi al-Amiri is the leader of the Badr Organization and one of the most prominent leaders of the Popular Mobilization Forces during the battles against the Islamic State organization. He is accused of having close relations with the Islamic Revolutionary Guard Corps. He headed the Ministry of Transport during the second Maliki government in 2010-2014 and now appears to be the closest radical Shiite force to the West, as he holds regular meetings with European ambassadors and in recent speeches has refrained from attacking the West. In 2012, he split from the Al-Mihrab Martyr Movement, which included the Islamic Supreme Council led by Ammar al-Hakim, and he ran in the 2014 elections in the State of Law Coalition.

Qais al-Khazali leads the Asa’ib Ahl al-Haq movement, which split in 2006 from the Sadrist movement. Khazali currently has a hostile relationship with Sadr. Through his Sadiqoun bloc, Khazali won 18 seats in the 2018 elections and the ministries of culture and labor. He constantly attacks the United States and calls for the withdrawal of its forces from Iraq. He also attacks Saudi Arabia and the UAE and is one of the most prominent critics of the October 2019 protests. His armed faction participated in the battles against IS.

Ammar al-Hakim is the son of the late Shiite leader Abdul Aziz al-Hakim and grandson of the sect’s authority, Mohsen al-Hakim. He is known as a moderate Shiite leader and although he won only three seats in the recent elections, he enjoys personal and family political clout that allowed him to maintain a certain balance in the bloc. In 2017 he sought to breathe new life into the Islamic Supreme Council, which was founded by his uncle Muhammad Baqir al-Hakim in 1982, but he failed to effect changes due to the influence of hawks over the council. Therefore, he split from the council and founded the National Wisdom Movement, which won 17 seats in the 2018 elections. His moderate rhetoric has given him access to various powers including the United States, Iran and the Gulf states as well as Iraq's Kurds and Sunnis. A source in his movement who spoke to Al-Monitor on condition of anonymity called him “the only Shiite leader who currently does not have an armed faction.”

Haider al-Abadi is the head of the Victory Alliance, which headed the Iraqi government between 2014-2018, and is considered a moderate Shiite leader. He belongs to the Islamic Dawa Party and was deemed one of its most prominent leaders until he resigned in 2019. His rhetoric is moderate. Though he tried to build his campaign on his legacy of victory against the Islamic State and defending Iraq's sovereignty against the Kurdistan referendum, he did only win one seat in the last elections in 2021.

Faleh al-Fayyad split from the Islamic Dawa Party and joined the National Reform Movement led by former Prime Minister Ibrahim al-Jaafari. He has headed the Popular Mobilization Units since its founding in 2014 and served as national security adviser and head of national security. He currently heads the National Contract Coalition, which has eight seats in the parliament.

The Coordination Framework is not a political party or coalition, it is an umbrella for Shiite parties to coordinate. The Sadrist movement was a part of it before withdrew in early 2021. The Coordination Framework meets on a weekly basis but does not have a fixed headquarters. Its meetings are periodically held at the offices of one of its leaders.

While one cannot say that the bloc's leaders are on the same page, they are all pursuing a common goal of opposing Sadr, because they know that Sadr's growing influence means greater exclusion for them.

The forces of the Coordination Framework are in competition with each other, and the conflict worsened at the beginning of 2019 with an exchange of threats between the Wisdom Movement and the Asa’ib Ahl al-Haq movement. Likewise, Maliki believes that Abadi reached the premiership in 2014 by deception and at his expense.

Some of the groups are aligned with Iran. Amiri, Khazali and Fayyad have close relations with Iran, particularly the IRGC. The commander of the IRGC's Quds Force, Ismail Qaani, has attended some of its meetings, according to Al-Monitor's sources.

The only thing that brought the Coordination Framework together and united them is their conflict with Sadr. Without it, their sharp differences would cause them to quickly break up.