Iraqi democracy is run by groups of nondemocratic political parties, raising concerns over the sustainability of democracy in Iraq. 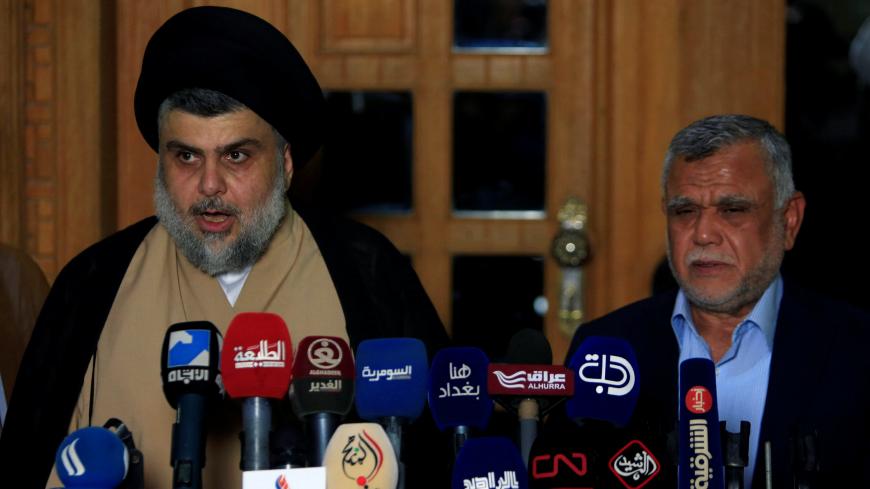 Former Sadrist block parliament member Awad al-Awadi has been standing since May 16 outside the residence of Muqtada al-Sadr in al-Hananah district of Najaf. Awadi’s sit-in, which he staged in a bid to meet the head of the Sadrist movement, comes two days after dozens of Sadr followers protested near his home in Hella city, accusing Awadi of corruption.

In video footage May 14, Awadi was seen in front of Muqtada’s residence, carrying a photo of him and his father, Mohammed Sadiq al-Sadr, begging Muqtada to meet and exonerate him.

Muqtada had sacked four members of his party, including Awadi, dismissing them of any business and government work in his name and the name of his family, against the backdrop of corruption charges.

Analyses by several observers in the media claim that Sadr's recent move is not related to the “corruption” of the members whose partisan membership was suspended but rather to internal economic reasons. Author Hamid Shaker said, “Those expelled by Sadr had grown beyond his control.”

The Sadrist movement is a family party. Muqtada inherited the popularity of his father, Mohammad, and his uncle, Muhammad Baqir al-Sadr. He acquired a large popular base in Iraq and has been the party's leader since 2003.

Iraqi political parties rely on symbols and individuals, often clerics or religious families figures who inherit the presidency of political parties. This phenomenon became concentrated among the post-2003 parties that are part of the current political process.

Yehya al-Kubaisi, an adviser to the Iraqi Center for Strategic Studies, told Al-Monitor, “Political parties are governed by a patriarchal structure, not by democracy. There are always leaders and followers. There is no tradition of democratic action. This structure imposes attacking any defector refusing to obey the leader’s orders. Any disobedience is seen as a direct challenge to the leader, an act unacceptable in this structure. To counter such disobedience, actual violence or symbolic violence (treason, accusations and insults) could be used.”

Kubaisi added, “There is no partisan structure in Iraq. The law organizing political parties that was produced by the political class failed miserably to regulate the minimum partisan action. Therefore, insignificant political formations still prevail over the scene, and they proliferate for the sole purpose of having access to funding.”

Weeks ago, head of the Badr Organization and leader of the mostly Shiite Hashd al-Shaabi paramilitary units Hadi al-Amiri faced a wave of anger within his party that evolved into protests. The former interior minister close to Amiri, Qasim al-Araji, formed the National Badr Movement.

Sources close to the Badr Organization told Al-Monitor, “Amiri had refused Araji’s renomination as a minister of interior, fearing he would gain a wider popular base.”

The Badr Organization, founded in 1982, is no different from the Sadrist movement or other parties. Amiri is the military commander of the organization, a previous military wing of the Islamic Supreme Council. Amiri remained its president when it became a political party in 2003.

Loyalty to the leaders in these parties is a prominent feature. All members aspire to become close to their leaders. In a voice recording obtained by Al-Monitor, prominent member of the Badr Organization Sayed Aqil is heard saying, “If [Amiri] or his assistants Sayed Waheb and Abu Mariam al-Ansari ask me to kill someone, I would do it.”

Since 2003, no Iraqi political party has applied democratic mechanisms in its administration. Even parties that hold general elections have kept their same leaders.

Muqtada al-Sadr's experiences after forming the Mahdi Army in 2003 were the most prominent. A number of members close to him defected and formed armed groups and parties that rivaled him at the political, military and even social levels — most notably, Qais al-Khazali and his Asaib Ahl al-Haq, Akram al-Kaabi and his Harakat Hezbollah al-Nujaba, and Aws al-Khafaji and his Abu Al-Fadl Al-Abbas Brigades.

It seems that what recently happened with Muqtada al-Sadr stemmed from his fear of those close to him, such as his jihadist aid Kadhum al-Issawi, and his special assistant Awn al-Nabi. Muqtada saw the need to end their roles before his Sadr supporters and everyone else did to avoid a repetition of the schisms he had previously faced.

Perhaps his experience with those close to him was the most prominent in the democratic political process in Iraq, but it was not the only. Former Prime Minister Ibrahim al-Jaafari defected from the Dawa party, Amiri had splintered from Shahid al-Mihrab and formed the Badr Organization, while Ammar al-Hakim split with Iraq's Islamic Supreme Council and established with other dissidents the National Wisdom Movement. It seems this series of defects has yet to end.

Harith Hasan, a senior scholar at the Carnegie Middle East Center, told Al-Monitor, “Splits are more likely with the rise of new leaders and their acquisition of the necessary experience to win the followers and exploit the gaps in the political process. The nature of the electoral system, which allows the change of alliances immediately after the elections and does not require the winning bloc to form the government, leads to high flexibility in alliances and an endless series of splits and new alliances.”

He went on, “The political system in Iraq is a neopatriarchal system, which some call democracy without democrats, based on competition between power centers whose legitimacy derives from personal charisma or family status and from clientelism-based alliances, rather than from a clear ideological-political agenda.”