Will Iraq's Sunnis get own political-religious authority?

Some Sunni groups are seeking to establish a unified religious leadership, setting Sunnis up to play a stronger role in the upcoming elections. 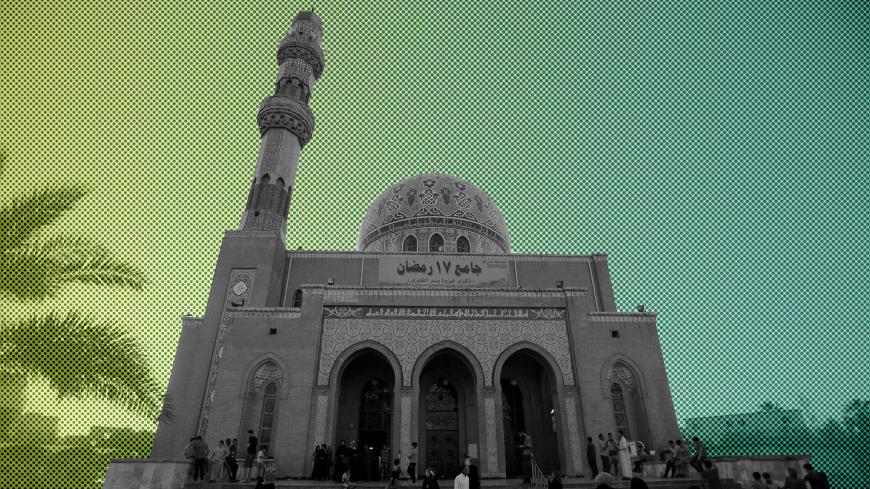 Sunni Muslims attend prayers at a mosque during Eid al-Fitr as they mark the end of the fasting month of Ramadan, in Baghdad, Iraq, June 25, 2017. - REUTERS/Khalid al Mousily

The visit of prominent Sunni cleric and Islamic preacher Ahmad al-Kubaisi to Iraq after a 15-year hiatus has sparked great controversy among Iraqi Sunnis. Kubaisi has called for the establishment of a unified Sunni marja (the highest level religious authority, somewhat akin to the Shiite one) to serve communities on both religious and political matters.

"The Kurds, Shiites, Turkmens, Jews, Christians and Yazidis all have religious authorities," Kubaisi said Feb. 1 in Baghdad in the presence of the head of the Sunni Endowment in Iraq, Abdul Latif al-Humim.

Kubaisi criticized the absence of a top Sunni leader and proposed the appointment of Humim as Sunni marja. "Sunnis have now an opportunity to be led by a commander. We have finally found a man in whom we can put our trust. A man who could unify us from Mosul to Basra under one community. This man is Abdul Latif al-Humim," Kubaisi said.

Abdul Rahman al-Luwaisi, a member of parliament for the (Sunni) Forces Union, said Feb. 7, "Kubaisi's visit to Iraq was made upon orders from the United Arab Emirates and Saudi Arabia to support Humim to become the commander of a top Sunni authority in Iraq."

"The visit comes to block the path of the Muslim Brotherhood and its affiliated Sunni parties," he added, a jab at the Sunni Islamic Party, which has played a major role in the Iraqi political landscape after 2003, as many of the party's members took up leading positions in power, namely parliament Speaker Salim al-Jabouri.

Saudi Arabia and the UAE have been trying for years to undermine the role of the Muslim Brotherhood and its affiliates in the region by supporting Egyptian President Abdel Fattah al-Sisi in his quest to keep the Brotherhood out of power in Egypt.

Earlier, the Islamic Party had publicly rejected Humim as head of the Sunni Endowment. Still, Iraqi Prime Minister Haider al-Abadi insisted on appointing him even though the candidates for this position legally must be elected by the Fiqh Council.

Luwaisi accused Shiite parties, mainly the National Alliance, of supporting and blessing Kubaisi’s visit and his endorsement of Humim as part of a political settlement before the May 12 parliamentary election.

Kubaisi's visit came at the invitation of Abadi, who met him personally Feb. 1. The prominent Sunni cleric congratulated Abadi on "the victories that have been achieved against the Islamic State" and praised "Abadi's leadership in guiding the country to victory and unity." Kubaisi expressed hope that "the reconstruction of Iraq will also witness great success under Abadi."

Abadi has the support of Saudi Arabia and the UAE against his Shiite rivals, former Prime Minister Nouri al-Maliki and head of the Badr Organization Hadi al-Amiri. Both men are close to Iran and are likely to run in the coming elections against Abadi.

Badr al-Fahl, a Sunni who is a member of the Iraqi parliament's Awqaf Committee, criticized what he called the establishment of "a religious authority supported from abroad."

In light of the political fragmentation among Shiites, Abadi is looking to strong Sunni parties to endorse him for election to a second term in office, which explains Abadi's invitation of Kubaisi and his support of Humim. Kubaisi enjoys wide religious and social popularity among the Sunnis of Iraq, and is also accepted among Shiites for his anti-sectarian positions.

Most Sunni religious figures in Iraq were taught by Kubaisi or his students. The Sunni cleric has been living in the UAE since the 1990s, where he enjoys extensive support. Kubaisi also served as adviser to the emir of Dubai and a rapporteur of the Drafting Committee for the Personal Status Law in the UAE.

Kubaisi visited Iraq just days after coalition forces took control of Baghdad on April 18, 2003, in an attempt to fill the political vacuum in the Sunni ranks and to mobilize Sunnis against the Shiite forces that controlled the political landscape.

Back then, Kubaisi delivered an enthusiastic political speech at the Imam Abu Hanifa Mosque in Baghdad calling for resistance to the American occupation. It caused a wave of Sunni protests against the US occupation of Baghdad.

Although the calls for a Sunni religious authority might yield political fruit for some in the coming elections, its actual establishment appears unlikely, even impossible, considering the socially and religiously diverse Sunni population. The Sunni community in Iraq does not follow a single marja that funds religious leaders independently, like the Najaf-based Shiite authority.