Under Arab and international sponsorship, Iraq’s Sunni leaders recently attended a conference in Turkey to discuss the future of Sunnis in post-IS Iraq, with the conference sparking Shiite outrage and dissent among other Sunni officials opposed to the Turkish role in Iraq. 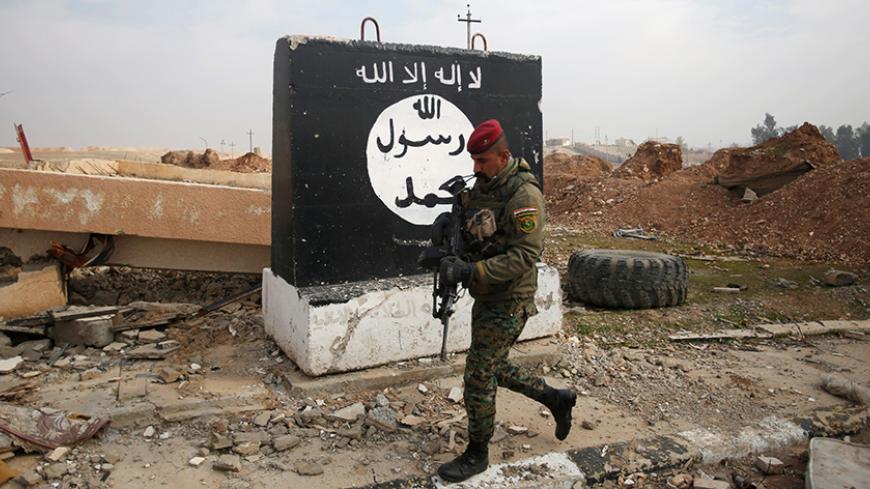 An Iraqi soldier walks next to a wall painted with the black flag commonly used by Islamic State militants, during a battle with IS, Mosul, Iraq, Jan. 21, 2017. - REUTERS/Khalid al Mousily

However, the participants failed to reach a clear position on contentious issues, especially the national and federal reconciliation project and the agreement on forming a new political bloc to run for the upcoming elections. The Ankara conference seemed to only create a new Sunni division and prompted a fierce reaction from Shiite factions who went as far as to accuse the conference participants of treason.

Mutahidoun bloc member Mutashar al-Samarrai told Al-Monitor, “The five countries sponsoring the conference wished to bring the views of the Sunni parties closer on certain issues such as post-IS national restructuring and reconstruction of liberated areas. The participants agreed on the formation of a committee of 25 Sunni figures whose mission is to formulate a unified Sunni stance on political settlement. However, we did not discuss the formation of a new electoral bloc or the regionalization of the country.”

He added, “With regard to the opposition voiced by some Sunni figures, this should not be construed as a dissent or division within the Iraqi Forces Alliance. The opposition was rather driven by the fact these figures were not invited to the conference.”

Samarrai said Turkey’s role is similar to that of the sponsoring countries (the UAE, Jordan, Qatar and the United States). He said, “Since 2003, the situation in Iraq has been open to all international stakeholders, as these countries wished to help Sunnis. Turkey has its own interests in Iraq and is seeking political stability there to avoid any spillovers due to the current state of chaos.”

Some Sunni figures severely criticized the Turkey conference. Badr al-Fahl, a member of the Sunni Iraqi Forces Alliance, announced in a March 10 statement to the NRT channel the formation of a Sunni front opposed to conferences held abroad. Composed of 50 lawmakers, the front was established against the backdrop of the latest conference held by Sunni factions in Ankara. Fahl added, “The participant figures were selected by a number of countries.”

“These figures represent only 25% of Sunni components in Iraq,” Fahl said, adding, “The majority of the participants in the Ankara conference are deeply involved in IS’ incubation base.”

Member of parliament Abdul-Rahman al-Luwaizi, a member of the Sunni Union, told Al-Monitor, “Any conference held abroad will fail to achieve national goals, especially if hosted in a country such as Turkey, with its historical ambitions in Iraq.”

Considered as an extension for the Geneva Conference of Feb. 21, the latest Turkey conference is part of international efforts led by Washington and with the help of Arab countries and Turkey, according to political and security expert Hisham al-Hashimi. He said, “The Trump administration is trying to establish a Sunni coalition in Iraq backed by Turkey, Saudi Arabia, Jordan, the UAE and Qatar,” adding that such a coalition would also be seeking the acceptance of Kurds and Shiites fighting IS.

Hashimi also tweeted: “Iran is concerned about these Sunni conferences as it prepares for the unknown amid its waning influence in Syria and Yemen. Iran’s last deal lies in the allegiance of some of its Iraqi allies. This is why it may counter with pre-emptive media campaigns aimed at thwarting these efforts.”

However, the Iranian concerns mentioned by Hashimi won’t be limited to such stances and statements. The Shiite outrage at Sunni conferences abroad may lead to contentious Shiite positions in the negotiations for post-IS national reconciliation, especially ahead of the upcoming elections. Moreover, some Shiite parties (mainly political blocs close to Vice President Nouri al-Maliki) have been pushing for a political majority Cabinet that includes Sunni or Kurdish figures close to Shiites, and thus shifting away from partnership and quota-based Cabinets as well as marginalizing large Sunni blocs.

As Sunni political parties move closer to adopting a unified Sunni stance on federalism and national reconciliation, and with Turkey proclaimed as a sponsor for Iraqi Sunnis (just as Iran is sponsoring Shiite parties), sectarian discourse in Iraq is reinforced. Even though some progress was made on the path toward settlement and Iran’s influence was successfully curbed by the US and Arab countries, the absent role of Iraqi national and civil parties on the political level is likely to serve the current sectarian and ethnic divide. This could mean that a historic compromise, where some parties abandon their long-standing ambitions to instead strive for the greater national interest, will be impossible.