Iraq is shoring up political and economic relations with neighboring states to prepare for rebuilding after the defeat of the Islamic State. 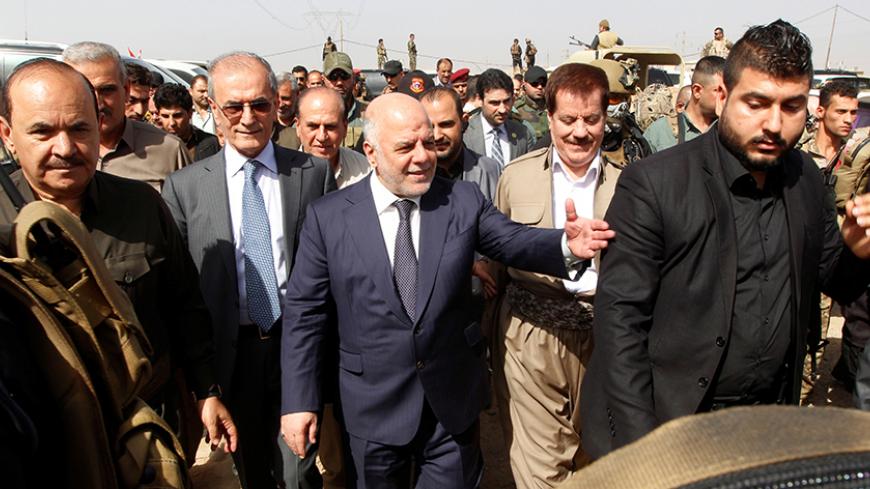 Amid fears of interference by neighboring countries in determining the future of Iraqi territory being liberated from the Islamic State (IS), Baghdad has launched an intensive diplomatic effort to improve and cement relations with states in the region.

The political map in Iraq in the post-IS era is yet to be shaped. Will Iraq remain unified based on a political system of partnership between the Shiites, Sunnis and Kurds? Will the Sunni areas be granted some sort of autonomous rule similar to the Kurdistan Region model, or will the country head toward division and secession by Sunnis and Kurdish areas? Such fears prompted Baghdad to launch a diplomatic offensive to build strategic relations with neighboring states to deter them from taking actions supportive of the inclination toward separation and division in the liberated areas.

In this regard, Prime Minister Haider al-Abadi met Jan. 9 in Baghdad with his Jordanian counterpart, Hani al-Mulki, and other members of a delegation that included Jordan's ministers of energy and mineral resources, media, finance, trade and supply, agriculture, industry and transport.

Jordanian government spokesman Mohammed Hussain al-Momani said in a press statement that the two sides would discuss “ways to resume work on joint projects that had been approved earlier, primarily the oil and gas pipeline project from Basra to the port of Aqaba.” The pipeline project is of great strategic significance, linking Jordanian interests to a unified Iraq and making the specter of partition something to avoid. The oil lies under the predominantly Shiite south but must be transported through predominantly Sunni Anbar province.

In December 2016, numerous Iraqi officials visited Amman to call on the kingdom to take an active role in supporting a unified Iraq as part of its planned national reconciliation project for the post-IS period. Ammar al-Hakim, the head of the National Iraqi Alliance, visited Dec. 7 and shortly thereafter several Sunni leaders did the same, including parliament Speaker Salim al-Jabouri; Osama al-Nujaifi, the head of the Mutahidoun bloc; and Saleh al-Mutlaq, the head of the Arab coalition.

In the same vein, there has been a clear effort at rapprochement between Turkey and Iraq, after an escalation of hostile rhetoric between the two sides in the last months of 2016 over Turkish troops on Iraqi soil, ostensibly to train Kurdish and Arab fighters for the battle against IS in Mosul. On Jan. 7, Turkish Prime Minister Binali Yildirim visited Baghdad and met with Abadi and President Fuad Massum and Jabouri.

Abadi and Yildirim held a joint press conference in which the latter confirmed Turkish support for Iraq's unity. “We will not allow any action threatening Iraq’s sovereignty and territorial integrity,” Yildirim said. For his part, Abadi said, “Iraq’s request for the withdrawal of Turkish troops from Bashiqa was agreed.”

These conciliatory actions reflect the two countries’ need to expand economic relations, as both Iraq and Turkey face economic crises with the potential to lead to social crises. They also share an interest in fighting terrorist and other armed groups, which have become of particular concern in Turkey.

IS has been conducting random operations in different countries, including Turkey, as its caliphate project shrinks under intense attack, and the Kurdistan Workers Party (PKK) has established a prominent presence in Sinjar, in Iraq's Ninevah province. It is therefore in the interest of both Baghdad and Ankara to advance a unified Iraq capable of preventing the spread of terrorist groups from Iraqi territories to neighboring countries.

Al-Monitor learned from a source in Iraqi intelligence who requested anonymity that the recent rapprochement between Iraq and Turkey was the result of ongoing efforts by the intelligence apparatus to resolve disputes between the two countries behind the scenes with Abadi's support and guidance.

The source said that efforts are also being made for a rapprochement with Saudi Arabia, which in October 2016 withdrew Ambassador Thamer Sabhan, the first Saudi ambassador to Iraq since 2003, after Iraq demanded he be replaced because of “overstepping the limits of diplomatic representation,” according to the Iraqi Foreign Ministry. Riyadh has yet to appoint a new ambassador.

US Ambassador to Baghdad Douglas Solomon said Dec. 21 that Saudi Arabia desires to improve bilateral relations with Iraq, following a meeting with Abdul Aziz al-Shammari, Saudi Arabia's charge d'affaires in Iraq. Solomon, who served as a former ambassador to Kuwait, Jordan and Turkey, said that many politicians in these countries are keen on stabilizing the situation in Iraq.

There is no doubt that cementing relations at the political and economic levels with Iraq’s neighbors would directly contribute to improving the situation in the post-IS period. It all, however, boils down to the Iraqi government’s ability to do so successfully. The pertinent issue is whether the Iraqi government will continue down this path or embark on a new chapter in the opposite direction.