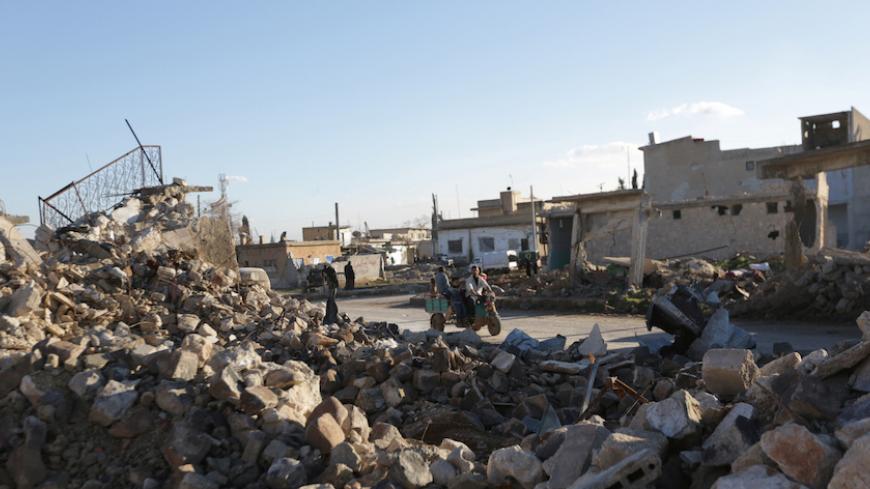 "Why did Turkey do this to us?"

Fehim Tastekin reports that many Syrians blame Turkey, once a close ally of Damascus, for the war, which has claimed the lives of more than 400,000 people, according to United Nations and independent estimates.

Tastekin, a columnist for Al-Monitor’s Turkey Pulse, reports from Damascus that “being a Turk in Syria is a bit difficult nowadays. No one will harass, insult or attack you, for sure, but everyone has a few words to say about Ankara’s transition from friend to foe.”

Tastekin writes, “In a cafe booked by a group of friends, the owner had joined the dancing patrons. When he learned we were Turks, he couldn't resist a few stinging words despite all the commotion around. 'Six years ago, I was an [Turkish President Recep Tayyip] Erdogan fan, and the two countries were friends,' he said. 'A Turkish friend who used to come and go cautioned me to go easy, saying that not everything is what it looks like. He proved right and we were badly mistaken. Still, I wish the best for the Turkish people, but the harm that Erdogan did to us will unfortunately reach Turkey as well.'”

Syrians doubt Turkey’s ability to restrain terrorist armed groups in Syria. “The international media may be preoccupied with the cease-fire,” Tastekin reports, “but one can hardly say it has led to great excitement in Damascus — not because of indifference, but because there is little faith that Turkey can fulfill its commitment to rein in armed groups. And the groups that really give the Syrian army a hard time are Jabhat Fatah al-Sham and the Islamic State (IS), which are excluded from the deal. Put briefly, the sentiment in Damascus is that the cease-fire is better than nothing, but a far cry from fixing all problems.”

Damascus swirled with speculation that Erdogan and Syrian President Bashar al-Assad might meet at the upcoming summit in Astana, Kazakhstan. “According to Syrians,” Tastekin writes, “the prospect of Assad sitting at the same table with Turkish President Recep Tayyip Erdogan is hard to swallow. Yet even if the two come together for the sake of national interests and diplomacy, Syrians say this would be seen as Erdogan’s defeat, not Assad’s.”

Tastekin observes, “The war comes to Damascenes in the form of killer rockets fired abruptly from the countryside, water and power cuts that make life unbearable, soaring prices, searches at checkpoints that slow traffic and more than 2 million people displaced from war zones. Still, the city continues to function, and social and economic life remains vibrant.” Fighting in areas west of Damascus has led to a potable water crisis affecting as many as 5.5 million in and around the capital.

Reporting from Aleppo, where a UN official last week described the destruction as “beyond imagination,” Tastekin reports, “I encountered deep anger against Turkey. When people heard we were Turks, their attitudes hardened. The question we heard most was, 'Why did Turkey did this to us?'”

Tastekin discovered “that the Russian military police sent to Aleppo were mostly Chechen. All 250 of them were said to be loyal to Chechen leader Ramzan Kadyrov.” Tastekin said his knowledge of the Caucasus facilitated his conversations with a Chechen soldier. “I asked him, 'Ah, you were serving under Shamil Basayev.' He panicked and signaled me to shut up. From 1992-1993, Basayev was tolerated by Russia and had recruited volunteers from the Caucasus and participated in the battles of Abkhazia. Basayev later emerged in the battles for Chechnya's independence and fought against the Russians. In the second Chechen-Russian war, Basayev's forces split; some joined Kadyrov, and those continuing to resist Russia set up the Caucasus Emirate. These two groups became dedicated enemies. Some from the Caucasus Emirate joined Jabhat al-Nusra (now Jabhat Fatah al-Sham) and the Islamic State (IS) in Syria. Now Basayev's former soldiers were allied with the Syrian regime to confront their former comrades. It was not wise to share a hotel with these soldiers: Finding another hotel became the first task of the next day.”

Tastekin’s account offers firsthand testimony from Syrians about the role of Jabhat Fatah al-Sham and other armed groups, a perspective often left out in the simple "government vs. rebels" narrative in much mainstream reporting on the conflict. “I was terribly shaken by what I saw in Aleppo. It became meaningless to ask who was responsible and why,” Tastekin writes.

Iraqi Prime Minister Haider al-Abadi is seeking to improve relations with Iraq’s neighbors in support of Iraqi unity, the shared threat from the Islamic State (IS), and the need for stability in Iraq once the terrorist group is defeated, Ali Mamouri writes.

Iraqi-Turkish relations, which have been particularly acrimonious because of the presence of Turkish forces in Bashiqa — the Turks are reportedly there to train fighters against IS — may have steadied, at least for now, after Turkish Prime Minister Binali Yildirim’s visit to Baghdad on Jan. 7. At a joint press conference, Bildrim backed Iraq’s “territorial integrity” and Abadi declared that “Iraq’s request for the withdrawal of Turkish troops from Bashiqa was agreed.”

Mamouri quotes a source in intelligence that the “recent rapprochement between Iraq and Turkey was the result of ongoing efforts by the intelligence apparatus to resolve disputes between the two countries behind the scenes with Abadi's support and guidance.”

The Iraqi source also told Mamouri that efforts are underway for a possible rapprochement with Saudi Arabia. The day after Al-Monitor published Mamouri’s article, Reuters reported that Iraqi Foreign Minister Ibrahim al-Jaafari had been carrying messages between Riyadh and Tehran in an attempt to reduce tensions.

Such an effort by Abadi could provide a much-needed spark for an Iran-Saudi dialogue on regional issues. The Iran-Saudi divide has inflamed crises in Syria, Bahrain, Yemen and Iraq. The prospects for an improvement in Iran-Saudi ties may have been set back last week by the death of former Iranian President Ayatollah Akbar Hashemi Rafsanjani, who had been a proponent of rapprochement between Tehran and Riyadh.

In an exclusive interview in 2015, Rafsanjani told Al-Monitor, “We do not inherently have any issues with Saudi Arabia or other Arab countries, because they are Islamic, and we see cooperation with them as a priority in our constitution. Even though they provided support for Saddam [Hussein] during Iraq’s imposed war on Iran, our differences were very quickly resolved once they responded to Iran's postwar policy of detente and stepped forward to cooperate. The [1987] killing [of Iranian pilgrims] in Mecca was among the disputes, and it was resolved by the order of the Imam [Ayatollah Ruhollah Khomeini] because the essence of the matter [of our relations] is not such that we [inherently] have conflict. … Recent events in the region, meaning the events in Syria, Iraq, Yemen and Bahrain, are among the issues that have created a distance. Of course, if the Iranian government and [its counterparts] decide to work together, things won’t be difficult and will be as they were in the past. It is possible to normalize the situation with a swift move for the sake of the Muslim world as a whole. I really believe it is possible.”

Ali Hashem writes that Iranian-Saudi relations have otherwise mostly suffered from “a lack of conviction in the necessity of rapprochement.” He continues, “There are also other causes for the tensions. One main element missing is regional stability. Another missing element is the presence of political influencers who dare to take initiatives despite the repercussions. The regional struggle is no longer political or driven by economics. Blood between those fighting in the name of Iran and its regional foes is being shed in the name of God — and this makes a solution in the near future a godly solution.”