While Aleppo lies in ruins, life in wartime Damascus remains vibrant, but not untouched. 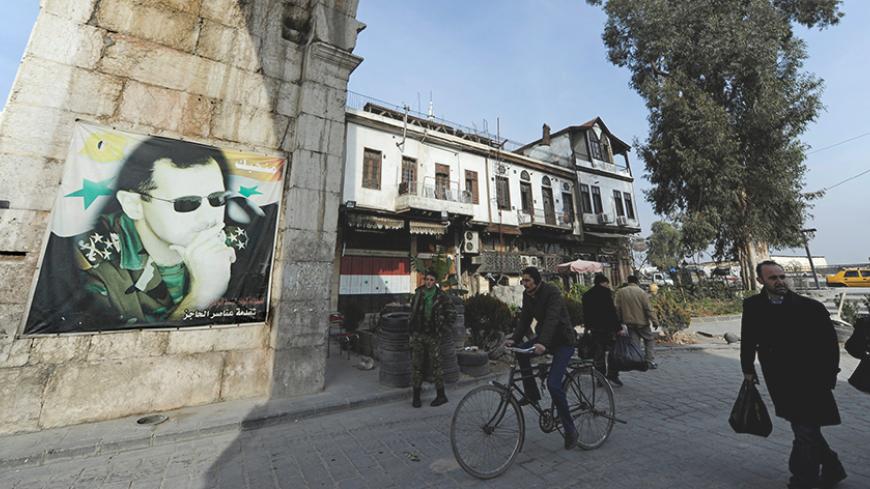 People walk past a picture of Syrian President Bashar al-Assad at the Bab Sharqi gate, near the Jobar district of Damascus, Syria, Jan. 5, 2017. - REUTERS/Omar Sanadiki

Lebanon is a country of unsettled scores. Each time I visit the country, I keep seeing and feeling the burdensome legacy of its 15-year civil war, no matter how many years had gone by since it ended in 1990. What would I find in neighboring Syria, as its nearly 6-year-old civil war appears to be winding down?

On Dec. 28, as the car I was riding in climbed the road from Beirut to the Anti-Lebanon Mountains on the way to Damascus, the weather turned quite cold. “If so many trucks are heading to Syria, things must have changed a lot,” I murmured, looking at the heavy traffic. “No, they have not,” the driver replied, explaining that most of the vehicles were headed to the nearby Lebanese town of Chtaura. Indeed, after Chtaura, the road became rather desolate, even though the war zones were far away.

The Damascus that greeted us looked nothing like the capital of a country in the grips of a cruel war. With bustling, clean streets that suggest regular garbage collection and daily life running at full gallop, the city can make one believe the coast is clear. This first impression, however, is misleading.

The Damascus countryside remains controlled by armed groups such as the Free Syrian Army (FSA), the Army of Islam and Jabhat Fatah al-Sham (formerly Jabhat al-Nusra). The war comes to Damascenes in the form of killer rockets fired abruptly from the countryside, water and power cuts that make life unbearable, soaring prices, searches at checkpoints that slow traffic and more than 2 million people displaced from war zones. Still, the city continues to function, and social and economic life remains vibrant.

In the wake of Aleppo’s liberation from rebel groups, two issues dominated the agenda in the capital, some 225 miles to the south. The first was the cease-fire that took effect Dec. 30 and the upcoming talks in Kazakhstan as part of a new peace bid by Russia, Iran and Turkey. The second was the “terror” flowing from the water taps. According to sources in Damascus, Jabhat Fatah al-Sham, which was excluded from the cease-fire, bombed water facilities in the Barada Valley, infusing the water resources with oil, affecting 5.5 million people.

Turkey’s state-run Anatolia news agency, however, had its own take on the "water terrorism.” It reported that Syrian President Bashar al-Assad’s forces and Hezbollah were “fiercely attacking” the Barada Valley, describing the region as “Syria’s new Aleppo.” In a second report, it said: “Assad’s cease-fire violations are concentrated in the Barada Valley. … Hezbollah and the Syrian army had besieged the Barada Valley in late July, blocking all entry and exits, in a bid to seize control of the region’s water resources.”

The international media may be preoccupied with the cease-fire, but one can hardly say it has led to great excitement in Damascus — not because of indifference, but because there is little faith that Turkey can fulfill its commitment to rein in armed groups. And the groups that really give the Syrian army a hard time are Jabhat Fatah al-Sham and the Islamic State (IS), which are excluded from the deal. Put briefly, the sentiment in Damascus is that the cease-fire is better than nothing, but a far cry from fixing all problems.

Regardless of whether the cease-fire unblocks the political process, Damascus appears bent on a two-pronged strategy: keep up the war until the armed insurgency is over, and pursue a domestic reconciliation process to cajole armed groups into laying down arms. Judging by the sentiment in Damascus, this strategy will continue, no matter whether a four-way summit is held in Astana, Kazakhstan. Negotiations with armed groups have already proved successful in dozens of regions.

Whether Assad will go to Astana is another issue of speculation. The talk is that Assad could go, depending on conditions, or send someone else. According to Syrians, the prospect of Assad sitting at the same table with Turkish President Recep Tayyip Erdogan is hard to swallow. Yet even if the two come together for the sake of national interests and diplomacy, Syrians say this would be seen as Erdogan’s defeat, not Assad’s.

Asked whether Assad would go to Astana, a senior military official in Damascus replied with a smile: “It doesn’t really matter as long as [Russian President Vladimir] Putin goes. Putin’s presence there is a guarantee for Syria.” It’s not for nothing that some Syrians refer to Putin by the nom de guerre “Abu Ali Putin," saying that he's one of them.

The victory in Aleppo has boosted spirits in Damascus. Preparations for New Year’s Eve were lively, with shops open late and Old Damascus bustling. It seemed to me that more couples were now walking hand in hand, reflecting perhaps less social control and pressure — an unlikely byproduct of the war.

In the narrow lanes of the Old City, the small, unassuming gates that lead to mansions with spacious courtyards stand as a metaphor for Syria’s social and political character — a simple wall on the outside but an utterly different world behind it. Most mansions operate as restaurants, cafes or hotels today. As we strolled the streets, they all had special programs in place for New Year’s Eve and were fully booked. All three places we tried for dinner had to turn us away.

In a cafe booked by a group of friends, the owner had joined the dancing patrons. When he learned we were Turks, he couldn't resist a few stinging words despite all the commotion around. “Six years ago, I was an Erdogan fan, and the two countries were friends,” he said. “A Turkish friend who used to come and go cautioned me to go easy, saying that not everything is what it looks like. He proved right and we were badly mistaken. Still, I wish the best for the Turkish people, but the harm that Erdogan did to us will unfortunately reach Turkey as well.”

Being a Turk in Syria is a bit difficult nowadays. No one will harass, insult or attack you, for sure, but everyone has a few words to say about Ankara’s transition from friend to foe.

Damascenes greeted the new year with fireworks and live bullets. But festivities aside, life in Damascus, the City of Jasmine, never lost much of its vibrancy. Damascus remains a city leaning against the oldest and reaching out for the newest — even in times of war. I have stopped several times at a cafe where a storyteller, clad in a white robe and red fez, sustains the ancient narrating tradition in the evenings, reading the story of Baibars, the 13th-century Mamluk sultan, to tea-drinking, hookah-puffing patrons.

Commercial life appeared lively as well. The marketplaces were crowded as usual. In the Sulaimaniyah complex, the Tourism Ministry has renovated the shops, and Munir Musaddi, a weaver from Hama, was at work making traditional towels.

On the first day of the new year, I took off for Aleppo early in the morning, accompanied by Damascus-based Turkish journalist Hediye Levent. The streets of Old Damascus were empty, littered with bullet casings — remnants of celebratory fire the night before.

The Homs-Khanasir road, occasionally blocked by IS militants emerging from the desert, looked better than during my 2015 visit, when maintenance work was underway.

Security on the road was provided by soldiers at observation points dotting the route.

The highway that leads to Aleppo via Homs and Hama was closed as Jabhat Fatah al-Sham and its allies still control the countryside. The alternate route — one that drivers speed up to cover as quickly as possible — passes between areas controlled by Jabhat Fatah al-Sham to the north of Homs and IS to the northeast, leading first to Salamiyah, then east, then north to Khanasir and Safira before reaching Aleppo. The battle to open this road reduced Khanasir and Safira to rubble. The road to the airport has been opened, but because the areas that have been liberated are still unfit for driving, we had to take a detour around Sukkari and Salahuddin to finally enter Aleppo.

Tastekin remains in Syria and plans a dispatch soon from Aleppo.

by Murielle KASPRZAK and Joseph SCHMID | AFP | May 26, 2022
END_OF_DOCUMENT_TOKEN_TO_BE_REPLACED