The assassination of the Russian ambassador in Ankara has engaged Turkey to the Russian option in Syria, while Russia sees it as an opportunity to create an alternative axis in the Middle East 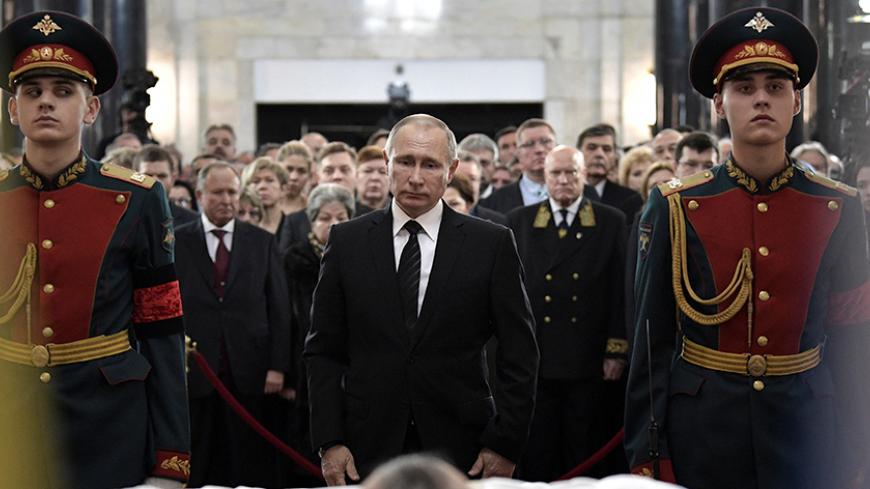 Russian President Vladimir Putin attends a memorial ceremony held for Russia's Ambassador to Turkey Andrei Karlov, who was shot dead by an off-duty policeman while delivering a speech in an Ankara art gallery on Dec. 19, Moscow, Dec. 22, 2016. - Sputnik/Kremlin/Alexei Nikolskyi

The assassination of Russia’s Ambassador to Ankara Andrei Karlov by an off-duty Turkish police official at an art event Dec. 19 has made Turkey extremely vulnerable. It didn’t take long for the ramifications of the assassination to affect foreign politics.

During a Syrian meeting held in Moscow between Russia, Turkey and Iran a day after the assassination, a trilateral solution proposed by Russia was approved. The murder has weakened Turkey’s standing to the extent that it can’t express any reservations. From now on it seems we will distinguish relations with Russia as “pre-Karlov” and “post-Karlov.”

For well-known and much-discussed reasons, Turkey’s Syria policy over the past year has been one of upheavals and turbulence. To restore relations with Moscow after shooting down a Russian jet on Nov. 25, 2015, Turkey was compelled to end its support of the opposition forces in Aleppo and mediate in their evacuation. Now just as Turkey was figuring out how to benefit from the availability of opposition fighters, Karlov was assassinated. Turkey had already lost one arm to Russia after shooting down its plane; now it lost its other arm.

According to a statement by Russian Foreign Minister Sergey Lavrov after the Dec. 20 Moscow meeting, two key points were agreed on:

Under normal circumstances, guaranteeing a cease-fire means halting logistic support and weapons transfer to Syria via Hatay and Kilis in Turkey. Turkey feels that if it halts its support to the opposition forces, then the groups on the side of the regime should also be denied support. In their joint press briefing in Moscow, Iranian Foreign Minister Mohammad Javad Zarif said the three countries have promised to fight the Islamic State (IS), Jabhat Fatah al-Sham (formerly Jahbat al-Nusra) and affiliated groups that have no benefit for Syria. Turkish Foreign Minister Mevlut Cavusoglu in the same briefing said the cease-fire envisaged for Syria does not cover IS and Jabhat Fatah al-Sham, and foreign assistance to groups that are covered by the cease-fire, including Hezbollah, should cease.

Another point to note is the perceptible shift in the negotiation process for Syria. Although the Moscow troika said they were not promoting an alternative to the Geneva process, a new solution concept that sidelines the West-Gulf axis is in the making.

President Vladimir Putin had said earlier they were in the process of organizing new peace talks that would exclude the United States and the United Nations and that such talks could be held in Astana, the capital of Kazakhstan. “All efforts by the United States and its allies to coordinate their actions have failed. None of their moves have really affected the situation on the ground,” Russian Defense Minister Sergei Shoigu said.

The role envisaged for Turkey in this new concept is to prepare the opposition groups for the change. Russia’s strategy when intervening in the Syrian crisis was first to cripple the armed groups, then to identify among them those who were willing to discuss a political solution and finally declare all the rest as terrorists and crush them. Russia has been working on Turkey to adopt this course of action, but Ankara has not been having an easy time acquiescing. While including Jabhat Fatah al-Sham and affiliated groups in their list of terror groups, Iran and Russia have also expanded it to cover other groups supported by Turkey. How much longer can Turkey be the guardian of groups such as Ahrar al-Sham that are linked to Jabhat Fatah al-Sham? Will Turkey be asked to abandon them? After the assassination, can Turkey resist Russian political pressures?

Turkey’s only hope is for Russia not to treat the ambassador’s murder as an act of sabotage against the relations of the two countries but as a murder by an off-duty police official who has adopted the slogans of Jabhat Fatah al-Sham.

Is there a new axis being shaped?

If the Iran, Russia and Turkey partnership succeeds, certainly it could open the way to a new axis that will reshape Middle East politics. But it will be a folly to ignore the reactions to the Moscow declaration. Not everyone is delighted with it. There are many issues that will test the feasibility of this declaration, such as:

Turkey’s shift to the Iran-Russia axis on Syria will surely affect the field. After all, about 70% of the logistics, arms and personnel needs of the Syrian front were being met from Turkey.