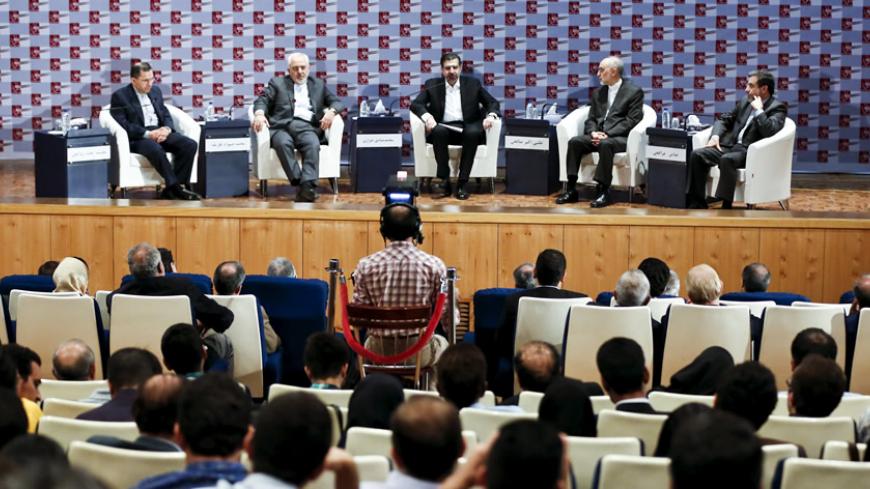 The Obama administration this week scored two major international endorsements for the Joint Comprehensive Plan of Action (JCPOA), leaving Israel as an outlier among America’s allies in opposing the Iran nuclear deal.

The Joint Statement of the US-GCC Foreign Ministers in Doha meeting Aug. 3 read: “Reiterating the position expressed at Camp David that 'a comprehensive, verifiable deal that fully addresses the regional and international concerns about Iran’s nuclear program is in the security interests of GCC [Gulf Cooperation Council] member states as well as the United States and the international community,' the ministers agreed that, once fully implemented, the JCPOA contributes to the region’s long-term security, including by preventing Iran from developing or acquiring a military nuclear capability.”

With the US-GCC meeting in Doha, the Obama administration seems on course on its approach to deepening US security cooperation with the GCC as a means to reassure and win over its Arab Gulf allies to support the Iran nuclear deal, a process that began at the Camp David summit May 14 and was discussed in this column.

The breadth of international support for the JCPOA now spans all of America’s close allies and vital international relationships, except one. With the backing of the European Union, the UN Security Council, the GCC and ASEAN member states, India, Japan, Korea, Australia and New Zealand, US President Barack Obama was not engaging in hyperbole when he told an audience at the American University in Washington on Aug. 5 that “every nation in the world that has commented publicly, with the exception of the Israeli government, has expressed support.”

Rafsanjani: US has "acted fairly well up until now" on nuclear deal

In an exclusive interview with Al-Monitor, former Iranian President Ayatollah Hashemi Rafsanjani said, “It seems that the Americans want to somewhat distance themselves from the past, and this is something that must be proven [in action].”

Rafanjani said that the United States has acted “fairly well up until now” in the nuclear negotiations, adding that “the bottom line has always been that America must somehow make amends for the past and vindicate itself in the minds of the people of Iran. Some of America's positive policies for resolving the nuclear issue might have been effective so far, and if they’re continued and lead to positive results, [the Americans] will come closer to this [vindication].”

Rafsanjani was hopeful on the prospects for Saudi Arabia to work collaboratively on regional security: “We do not inherently have any issues with Saudi Arabia or other Arab countries, because they are Islamic, and we see cooperation with them as a priority in our constitution. Even though they provided support for Saddam [Hussein] during Iraq’s imposed war on Iran, our differences were very quickly resolved once they responded to Iran's postwar policy of detente and stepped forward to cooperate. The [1987] killing [of Iranian pilgrims] in Mecca was among the disputes, and it was resolved by the order of the Imam [Khomeini] because the essence of the matter [of our relations] is not such that we [inherently] have conflict.”

The former Iranian president said, “Recent events in the region, meaning the events in Syria, Iraq, Yemen and Bahrain, are among the issues that have created a distance. Of course, if the Iranian government and [its counterparts] decide to work together, things won’t be difficult and will be as they were in the past. It is possible to normalize the situation with a swift move for the sake of the Muslim world as a whole. I really believe it is possible. However, we have to see where these events lead, which is very important.”

Iranian Foreign Minister Mohammad Javad Zarif, in a column in As-Safir that was published in English in Al-Monitor, similarly said that “it is imperative to form a regional platform for dialogue in our region and then among all Islamic countries in the Middle East” based upon “common goals and principles for the region, namely respecting the sovereignty, territorial integrity and political independence of all countries — not to violate their borders — to refrain from intervening in other countries’ domestic affairs, settle disputes peacefully, prevent the threat or use of force, strive for peace and stability, and achieve progress and well-being in the region.”

Invoking several Quranic references, Zarif suggested that this “regional platform” would not only address Yemen and Syria, but civil nuclear cooperation, including “central nuclear enrichment to general nuclear fuel, which could be done through technical collaboration between the Islamic countries of the region.”

US, Russia and Iran resume diplomacy on Syria

In a sign of a new diplomatic push on Syria, Walid Moallem, Syrian deputy prime minister and minister of foreign affairs and expatriates, visited Iran on Aug. 4-5 for consultations and meetings with Iranian leaders. Russian Special Envoy for Middle East affairs and Deputy Foreign Minister Mikhail Bogdanov joined Moallem in Iran for consultations on Syria.

A senior Iranian Foreign Ministry official told Al-Monitor’s Ali Hashem that Iran has amended its four-point plan for Syria and submitted it to Turkey, Qatar and Egypt for review.

Hashem writes, “When it was presented, the proposal’s four steps were: Secure an immediate cease-fire, create a national unity government, rewrite Syria’s constitution to include the majority of Syrian ethnic groups and hold national elections under international supervision. The Iranian official explained that the plan is under serious consideration by Syria and countries involved in the Syrian crisis and that an updated version will be sent to the UN secretary-general. The main aim is finding an exit strategy from the crisis.”

Moallem traveled from Tehran to Muscat on Aug. 6, where he and Omani Minister of Foreign Affairs Yusuf bin Alawi discussed “unifying constructive efforts to put an end to the crisis in Syria,” according to the Syrian Arab News Agency. Oman provided the venue for back channel consultations between the United States and Iran prior to the negotiations on the JCPOA. Saudi Foreign Minister Adel al-Jubeir will travel to Moscow on Aug. 11 for meetings with Russian Foreign Minister Sergey Lavrov. A Syrian opposition delegation is expected to visit Moscow soon.

Meanwhile, on Aug. 7, the UN Security Council agreed to an investigation into the responsibility for the use of chemical weapons in Syria. Paul Saunders writes, “[US Secretary of State John] Kerry and [Russian Foreign Minister Sergey] Lavrov have clearly been engaged in intense discussions, meeting twice during one week, in Doha (with their Saudi Arabian counterpart) and in Kuala Lumpur, on the margins of an annual summit of the Association of Southeast Asian Nations. To date, Lavrov has been more cautious than Kerry, saying only, 'We agree that we need to join efforts in combating this phenomenon [the Islamic State] as soon as possible and as efficiently as possible,' but acknowledging, 'We haven’t developed a common approach to how exactly this can be done.' Lavrov added that US and Russian 'experts' would continue to discuss this, 'guided by existing initiatives.' This might be a veiled reference to earlier US-Russian cooperation on Syria’s chemical weapons. … Nevertheless, Russia remains frustrated with US airstrikes into Syria, which Lavrov recently described as 'a violation of international law' and 'an obstacle on the road to forming a united front to fight terrorism, including the Islamic State and [Jabhat al-Nusra].' If that side of the US-Russia relationship remains dominant in Syria and elsewhere, the Security Council — and the September General Assembly — could have a very different tone.”

Al-Monitor has released its second annual investigation into Middle Eastern lobbying in Washington.

The series delves into the Foreign Agent Registration Act (FARA) lobbying disclosures to reveal where and why Middle East countries are spending their money among Washington’s lobbyists and public relations firms. Among the subjects covered by congressional correspondent Julian Pecquet include: donations to the Clinton Foundation by Morocco and Algeria as they battle for influence over the Western Sahara; AIPAC’s lobbying campaign to kill the Iran nuclear deal; campaigns to maintain US arms to Egypt and Bahrain; and the United Arab Emirates’ $12.7 million Washington campaign on a range of issues.

Al-Monitor is highlighting the region’s cultural heritage. Adnan Abu Zeed reports that despite the destruction and looting of Iraq’s archaeological sites, there is evidence of the potential for further excavations and discoveries. Vitaly Naumkin writes about the need for more urgent and effective international action to protect the region’s cultural treasures from destruction. These and other articles on Al-Monitor's cultural heritage series can be accessed here.

Note: This article has been updated since its initial publication.