In an exclusive interview with Al-Monitor, Ayatollah Hashemi Rafsanjani speaks about the future of Iran-US ties, Tehran's troubled relationship with Riyadh and how to move forward. 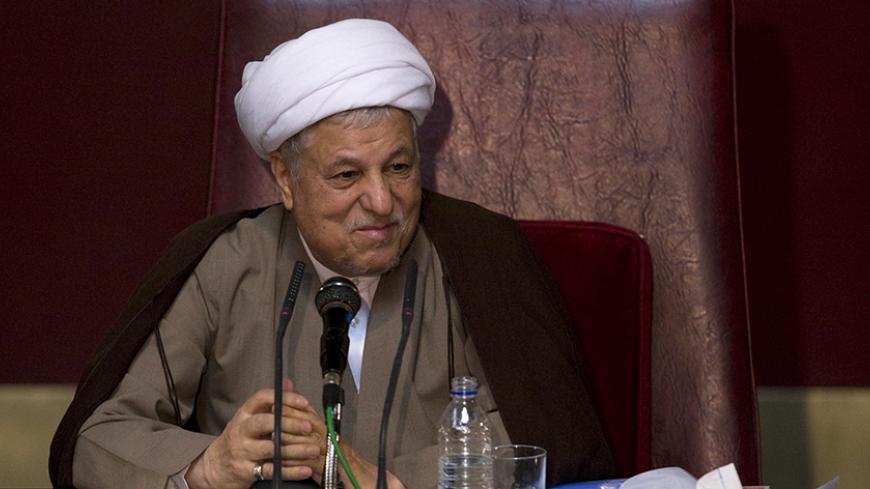 TEHRAN — In an exclusive interview with Al-Monitor, Ayatollah Hashemi Rafsanjani, one of Iran’s most powerful politicians, spoke about the future of relations with the United States. He also hit back at domestic critics of Iran’s nuclear deal with six world powers, saying they are “making a mistake.” While acknowledging that Washington seems to want to “distance itself from the past,” Rafsanjani said that that approach needs to be proven in action and that the implementation of the deal would be a major step. The interview in his Tehran office on July 28 is the first Rafsanjani has conducted with a foreign media outlet since the Joint Comprehensive Plan of Action was struck.

A senior cleric and two-time president, Rafsanjani also spoke about regional crises, including Tehran’s tense relationship with Riyadh. Arguing that Iran “does not inherently have any issues with Saudi Arabia or other Arab countries,” he pointed to Saudi-Iranian engagement in the aftermath of the 1980-88 Iran-Iraq War despite Riyadh’s prior backing of Saddam Hussein. Rafsanjani emphasized that cooperation with Saudi Arabia and other regional states is “a priority in our constitution.” Of note, Rafsanjani headed crucial talks with Riyadh in the 1990s, along with then-Secretary of Iran’s Supreme National Security Council Hassan Rouhani, ushering in important security coordination.

In the interview, Rafsanjani also referred to the order from Ayatollah Ruhollah Khomeini, the founder of the Islamic Republic, to repair ties with Riyadh after the 1987 killing of hundreds of Iranian pilgrims in Mecca, seemingly hinting at the possibility of normalizing the regional situation "with a swift move.” He also revealed that late Saudi King Abdullah had pressed for him to attend the hajj pilgrimage on several occasions "toward the end of his life."

Undeterred by the Guardian Council’s disqualification of his candidacy in the 2013 presidential election, ultimately won by his protege Rouhani, Rafsanjani has recently been in the news over his announcement that he will run in the upcoming elections for the Assembly of Experts, which is responsible for appointing the next supreme leader.

The full transcript of Al-Monitor's interview with Rafsanjani follows, translated from the original Persian:

Al-Monitor:  Considering Iran's nuclear deal with the West, how do you assess the prospects of political cooperation between Iran and the United States?

Rafsanjani:  In the name of God, the compassionate, the merciful. Naturally, the path before Iran and America is not as straightforward as that of [Iran and] other Western countries. Because from [even] before the revolution up until now, there has always been the image in Iran that America is behind every impediment and obstruction against Iran. However, it seems that the Americans want to somewhat distance themselves from the past, and this is something that must be proven [in action].

Al-Monitor:  Did you see the same pattern of the United States distancing itself from the past in the negotiations?

Rafsanjani:  In regard to the nuclear issue, [the Americans] have acted fairly well up until now. We see that officials from their executive branch, who are from the Democratic Party, are engaged [in clashes] with the Republicans, and that their secretary of state, their president and other individuals are declaring their positions very explicitly. In my view, the bottom line has always been that America must somehow make amends for the past and vindicate itself in the minds of the people of Iran. Some of America's positive policies for resolving the nuclear issue might have been effective so far, and if they’re continued and lead to positive results, [the Americans] will come closer to this [vindication].

Al-Monitor:  In your view, what will Iran’s relations with Saudi Arabia and the region be like after the deal?

Rafsanjani:  We do not inherently have any issues with Saudi Arabia or other Arab countries, because they are Islamic, and we see cooperation with them as a priority in our constitution. Even though they provided support for Saddam during Iraq’s imposed war on Iran, our differences were very quickly resolved once they responded to Iran's post-war policy of detente and stepped forward to cooperate. The [1987] killing [of Iranian pilgrims] in Mecca was among the disputes, and it was resolved by the order of the Imam [Khomeini] because the essence of the matter [of our relations] is not such that we [inherently] have conflict.

Al-Monitor:  Where is the problem now? Where do the tensions stem from?

Rafsanjani:  Recent events in the region, meaning the events in Syria, Iraq, Yemen and Bahrain, are among the issues that have created a distance. Of course, if the Iranian government and [its counterparts] decide to work together, things won’t be difficult and will be as they were in the past. It is possible to normalize the situation with a swift move for the sake of the Muslim world as a whole. I really believe it is possible. However, we have to see where these events lead, which is very important.

Al-Monitor:  Have you been invited to attend the hajj pilgrimage?

Rafsanjani:  Toward the end of his life, King Abdullah on two or three occasions pressed that I be there [in Saudi Arabia] for the hajj pilgrimage during the month of Ramadan.

Al-Monitor:  How about after King Abdullah? Has King Salman [bin Abdul-Aziz Al Saud] extended any invitation for hajj?

Rafsanjani:  This new group that has come to power has not requested anything from me. It is natural that they haven't, because the present situation is not such that I can accept and go [to Saudi Arabia].

Al-Monitor:  Inside [Iran], some have described the deal as a retreat on the part of Iran. What is your view on this?

Rafsanjani:  I think those [in Iran] who express opposition are making a mistake. There was no retreat; we maintained our position and all of our nuclear infrastructural needs are preserved. Moreover, our research and development will be pursued seriously, which is very important for us. Even if the [restrictions under the deal] didn’t exist, we need time for research as our current means of enrichment is elementary and cannot provide for our [industrial] needs. [Under the nuclear deal], we will be able to develop [IR-]6 or [IR-]7 [centrifuges], which have a 10- to 15-times larger output and require plenty of raw material. If we want to operate four or five nuclear power plants and fuel them on our own, we need to have a very strong fuel production [capability].