The resumption of Iranian participation in the annual hajj pilgrimage may help pave the way for an end to the diplomatic deadlock between Riyadh and Tehran. 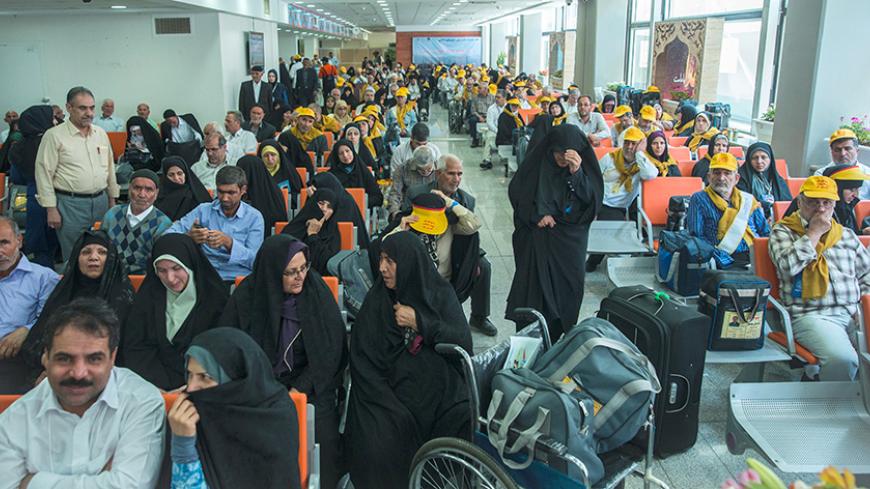 Iranian pilgrims wait at the Imam Khomeini airport in Tehran as they depart for the annual hajj pilgrimage to the holy city of Mecca, in Tehran, Iran, July 31, 2017. - Nazanin Tabatabaee Yazdi / TIMA via REUTERS.

TEHRAN — For the first time in two years, Tehran has sent Iranian pilgrims to Saudi Arabia for the annual hajj pilgrimage. Although this can be considered a positive step toward reducing tension between the two sides, it is naive to think that developments such as this will solve the existing problems between Tehran and Riyadh.

Iran’s decision to end its boycott of the hajj, which followed the 2015 stampede that left 465 of its citizens dead, comes at a time when tension with Saudi Arabia is at its peak. While Riyadh severed ties in early 2016 following the storming of its diplomatic facilities in Iran by protesters furious about Saudi Arabia’s execution of a dissident Shiite cleric, there has been further escalation in recent months. Saudi Arabia, alongside Bahrain, Egypt and the United Arab Emirates, severed ties with Qatar, ostensibly over Doha’s continued relations with Tehran; in parallel, the Saudi foreign minister has referred to Iran as the greatest state sponsor of terrorism. Yet amid this tension, the foreign ministers of Iran and Saudi Arabia surprised political observers by shaking hands at the Organization of Islamic Cooperation meeting in Istanbul on Aug. 1.

Although this encounter was standard diplomatic practice, it received great attention in Iranian media and increased hopes for an opening in bilateral relations — particularly since the handshake coincided with Iran’s decision to resume hajj pilgrimages. The latter decision, however, has had its share of domestic critics.

At a meeting with Iranian hajj officials July 30, Supreme Leader Ayatollah Ali Khamenei referred to security issues related to the pilgrimage, saying, “There were some concerns regarding this matter [of pilgrims being sent to Saudi Arabia]. However, officials from all branches of government in the Supreme National Security Council took every aspect [of the issue] into consideration and decided that it can go ahead.”

Meanwhile, Saudi authorities have this year reportedly been more respectful toward the 86,000 Iranians who managed to obtain visas to perform the hajj. The last time Iran sent pilgrims to holy sites in Saudi Arabia, in 2015, only 62,000 received visas — meaning that there has been a nearly 40% increase in the number of Iranian hajj pilgrims.

Moreover, Iran’s hajj affairs office in Saudi Arabia, which had been dormant and had its sign taken down after Riyadh severed ties, resumed operations in August. This is while political relations remain frozen and respective embassies continue to be closed. However, of note, based on the agreement on the hajj reached between Iran and Saudi Arabia, Tehran has sent 10 consular staff from its Foreign Ministry to provide assistance to Iranian pilgrims.

As a result, there is hope — albeit little — that Saudi Arabia might want to change its approach toward Iran. Kamran Karami, a Tehran-based scholar who focuses on Saudi Arabia, told Al-Monitor, “While Iranian pilgrims going to this year’s hajj is a positive development amid the heavy tension that exists between Riyadh and Tehran, we should not exaggerate its potential for solving the regional problems that exist between the two countries.” Karami added, “These two countries have always tried to separate hajj from politics and allow it to go forward peacefully and without any tension. For Saudi Arabia, economic advantages, as well as the advantages of hosting an international event free of any controversy, are the two main priorities. The presence of the Iranian pilgrims can be viewed in this regard. We should remember that the political and geopolitical disagreements between two regional powers in the Middle East must be separated from the issue of [the annual hajj] pilgrimage.”

In the meantime, there are indications that Saudi Arabia wishes to remove the tension with Iran and is looking for a mediator to do so. This has further renewed hopes for change in Tehran-Riyadh relations.

The idea of a third party mediating between Iran and Saudi Arabia is not new. In April 2015, then-German Foreign Minister (and now President) Frank-Walter Steinmeier proposed the idea; in November 2015, Oman followed suit; in January 2016, it was Indonesia’s turn; and in the same month, Turkey also announced a willingness to act as a mediator to help solve the issues between Iran and Saudi Arabia. However, if the claims made by Araji are correct, it would be a new and important development because it would entail Prince Salman's being the one asking for assistance, indicating that Saudi Arabia is serious about solving its problems with Iran.

Former Iranian Ambassador to Jordan Nosratollah Tajik told Al-Monitor, “Considering all the developments that have taken place in the region — such as the situation in Syria, Saudis reaching a dead end in Yemen, [Mohammed] bin Salman’s rise to power and the need to have peaceful foreign relations in order to advance one’s domestic agenda — any attempt to reopen negotiations and avoid conflict is to Iran’s advantage and helps its foreign policy. However, we should be careful how we analyze Saudi Arabia’s signals. We have always welcomed the idea of reducing and eliminating tension with our neighbors and Saudi Arabia. Nonetheless, we should wait and see how serious Riyadh is regarding this issue.”

On the other hand, Saudi Arabia’s attempt at getting close to certain Iraqi Shiite movements that have close ties with Iran could end up increasing tension between Tehran and Riyadh. The latter is clearly mindful that the Saudi-Iranian tension has its roots in regional changes — in favor of Iran — following the overthrow of Iraqi dictator Saddam Hussein. As such, Riyadh’s attempt at forging a connection with Iraqi Shiite figures (such as Muqtada al-Sadr) who have always had close relations with Tehran could be viewed as Saudi Arabia trying to change the power balance in Iraq to its own advantage and to the disadvantage of Iran.