Saudi Arabia’s engagement with Iraqi Shiite figures gives rise to speculation about a potential opening between Tehran and Riyadh. 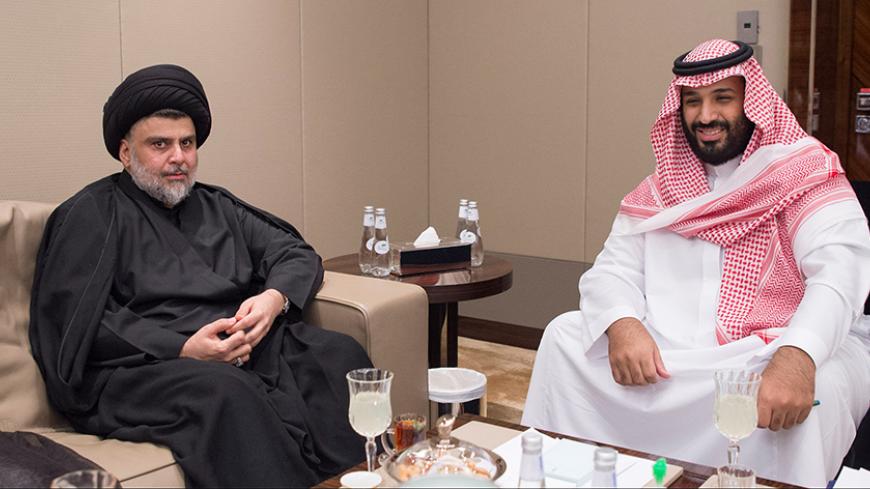 On May 2, Saudi Arabia’s Mohammed bin Salman (now the crown prince) said in a television interview that dialogue with Iran was impossible due to Iranians' belief in the Shiite Messiah. “Their stance is that the awaited Mahdi will come, and they need to create a fertile environment for the arrival of the awaited Mahdi, and they need to take over the Islamic world,” bin Salman said when he was deputy crown prince. He then asked, “Where are the common points that we might be able to reach an understanding on with this regime?”

Almost three months later, on July 31, the crown prince received in the western port city of Jeddah prominent Iraqi Shiite cleric Muqtada al-Sadr. Sadr is the leader and founder of what used to be called the Mahdi Army — named after the same Shiite Messiah mentioned above whose reappearance Sadr believes in. The Iraqi cleric has also publicly expressed harsh views of Saudi Arabia. In 2016, he reacted to the execution of Saudi Shiite dissident cleric Sheikh Nimr al-Nimr by calling on Saudi Shiites to take to the streets and by describing the authorities in the kingdom as "Daesh [Islamic State] rascals.”

Despite these sectarian rants, neither Salman nor Sadr found it difficult to meet and pose for pictures as they discussed “issues of common interests,” according to the Saudi state news agency. The meeting was once again more proof that sectarianism in the Middle East is only a thin veil that covers the heart of the current strife in the region, namely politics. This is what brought Sadr to Saudi Arabia and prompted the Saudis to open their arms and welcome him via their former ambassador to Iraq, Arab Gulf Affairs Minister Thamer al-Sabhan, who was once seen by the Iraqi authorities as persona non grata.

Sadr isn’t the first prominent Iraqi Shiite figure to have recently visited the kingdom. On July 18, Interior Minister Qasim al-Araji, a close ally of Tehran, traveled to Saudi Arabia — one month after Iraqi Prime Minister Haider al-Abadi started a regional tour by visiting Riyadh — and from there made his way to Tehran and Kuwait.

These visits have sparked many questions. For instance, are they really part of an Iraqi attempt to mediate between Iran and Saudi Arabia, and is there an Iraqi channel for the exchange of messages between Tehran and Riyadh? Or is it all a Saudi plan to curtail Iranian influence by embracing Shiite Arabs at the eastern gate of the Arab world?

When Sadr arrived in Jeddah, an anonymous Twitter user known as Mujtahid — noted for his regular leaking of alleged developments within the secretive House of Saud — tweeted that the warm welcoming of Sadr “and prior to him al-Araji, offering thousands of [hajj] visas to PMU [Popular Mobilization Units], celebrating the [liberation] of Mosul, are all attempts to get closer to Iran so that they can convince the Houthis to have mercy on bin Salman.” Thamer al-Sabhan in a July 31 tweet attacked “[Ayatollah Ruhollah] Khomeini’s version of Shiism” and praised what Sabhan called “genuine Shiism.” Less than 24 hours later, however, that tweet was removed. It is still unclear whether Sadr is really attempting to mediate between Tehran and Riyadh. However, a senior Iranian official who spoke to Al-Monitor on condition of anonymity expressed doubt that such an endeavor would succeed in ending the rivalry between the two regional powers.

The apparent Saudi-Iraqi rapprochement was given greater attention as many observers expressed shock at suddenly seeing Iranian Foreign Minister Mohammad Javad Zarif and his Saudi counterpart Adel al-Jubeir embracing one another and shaking hands in Istanbul on July 1. The top diplomats were in the Turkish city to take part in the Organization for Islamic Cooperation’s snap meeting on the latest developments in Jerusalem. Both men have taken part in several gatherings in the last year, including one in Switzerland on Oct. 16. However, in the latter session, while both were facing each other, they did not appear to even maintain eye contact.

While Zarif quickly dismissed speculation about a thaw, saying that he and Jubeir “have long known each other, and that was [simply] another greeting,” he added that although Iran “does not agree with many policies of Saudi Arabia, its policies have always been based on establishing good ties with neighbors.” The surprising encounter in Istanbul also notably came as the first pilgrims from Iran arrived in Saudi Arabia to take part in the first hajj in two years; as part of this, Riyadh granted 10 Iranian diplomats permission to be present in three Saudi cities to take care of the pilgrims, even after Saudi Arabia cut diplomatic ties with Iran in 2015.

While there may at present be no common ground between the two countries, some steps might help if there is an intention to bridge the gaps. Iraq has the potential to play an important role in such an effort, and whereas the Iranians have the upper hand in Baghdad, the Saudis might help in integrating the Iraqi Sunnis in the political process. This might have implications later on, perhaps on the Yemeni crisis and the situation in Syria.

For now, there can only be speculation, for there is no definite evidence that a serious initiative to foster reconciliation is being pushed with the consent of both sides. Iran is unhappy about seeing the Saudis getting close to Israel, even behind the curtains, as Iranian officials see this as a threat to Iran's interests. On the other hand, the Saudis are very concerned that Iran might be gaining influence in some Arab countries, and this alone from the Saudi point of view undermines Riyadh's ability to draw policies in the region. Syria, Yemen and Lebanon are good examples in this regard, not to mention the latest crisis with Qatar, where Iran played an important role in breaking the blockade on the tiny Gulf State.

Despite many indications to the contrary, Saudi Arabia and Iran might even be experiencing a truce, a ceasing of hostile acts or having an understanding where each state gives the other some concessions. But even this wouldn’t mean that their rivalry will end. At best, it would just be another break before the next standoff begins.