As Iraq and Saudi are preparing to open land border crossings between them, trade activities are likely to resume in the next few weeks. 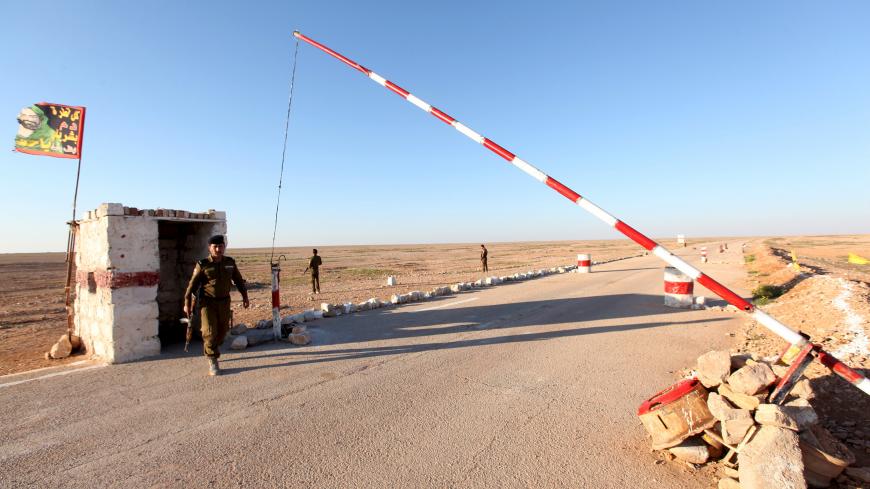 A member of the Iraqi security forces stands guard at a checkpoint during a patrol at the border between Iraq and Saudi Arabia, Feb. 17, 2016. - REUTERS/Alaa Al-Marjani

BAGHDAD — Iraq and Saudi Arabia are preparing to reopen their shared border crossings that were closed after the Iraqi invasion of Kuwait 27 years ago. Following the conclusion of monthslong bilateral talks, both countries reached an agreement July 17, during a visit to Riyadh by Interior Minister Qasim al-Araji, to reopen several land crossings along the 505-mile border.

In a sign of support, US envoy Brett McGurk visited the Arar border crossing between Iraq and Saudi Arabia on Aug. 16, and met with Thamer al-Sabhan, Saudi Arabia’a Arab Gulf affairs minister.

Faleh al-Ziadi, governor of Iraq’s Muthanna province, said, “Hopefully, [the Jamima crossing] will be opened to pilgrims first, and later on for trade, after the Eid al-Adha holiday in early September.” He also spoke of “an agreement with the Saudi side regarding the use of the crossing for the movement of people and goods between the two countries.”

As Iraq’s security situation deteriorated over the past decade, with the Islamic State taking control of Mosul in 2014, Saudi Arabia intensified its security measures, deploying 30,000 Saudi soldiers along the border with Iraq.

Yet trade activities will be revived once again along the Iraqi-Saudi border, and citizens will be able to cross for mutual visits. This marks a new era of joint coordination between Baghdad and Riyadh along the border.

A source in the Iraqi border guards, who was not authorized to speak to the media, told Al-Monitor, “There is ongoing Iraq-Saudi coordination to reopen border crossings, almost on a daily basis. Also, the Iraqi Ministry of the Interior has increased security to secure roads leading to these crossings.”

The Iraq-Saudi coordination does not seem to be limited to the reactivation of economic activity at the land crossings. Joint coordination centers will also be established to prevent smuggling and ensure the exchange of information between the countries.

In an interview with Dubai-based Saudi al-Arabiya TV on July 23, Araji confirmed that the Iraqi government had reached an agreement with Saudi officials to open the Arar and Jamima crossings, not only for pilgrims but for trade. “The Iraqi and Saudi sides have the strong will to promote bilateral cooperation,” the Iraqi interior minister said. “Discussions on the opening of border crossings are now over, and both sides reached the implementation stage, during which new crossings for visitors, tourists and trade will be opened.”

Iraqi Minister of Transportation Kadhim al-Hamami told the press July 25 that it’s possible that the railway between Saudi Arabia and Iraq will be reopened as well. This development, he said, “would unleash economic activity between the two countries and connect Arab countries through the railway.”

“Work is underway to reopen seven land crossings between Iraq and Saudi Arabia, including the Jamima and Arar crossings,” Hamami said. “It is important to reopen the crossings, which will improve the movement of goods between the two countries. Iraq is in dire need of many Saudi-made goods and food products.”

Iraqi economic expert Bassem Jamil told Al-Monitor that the reopening of the crossings “will positively affect the Iraqi economic situation, with the imposition of taxes on goods entering Iraqi territory. This is true particularly since large quantities of goods will enter Iraq via Saudi territory.”

“New jobs will be created with the opening of crossings,” he said. “This will also boost the Iraqi state treasury receipts no less than $10 billion per year. Thus, it is of utmost necessity to gain economic advantages from this step.”

The opening will likely boost the presence of Saudi goods on the Iraqi market. In turn, this could lead to a decrease in the availability of Iranian products, which have dominated Iraqi shops since 2003. This move will benefit both Iraq and Saudi Arabia at the economic and political levels. On the security level, Araji said that “there is joint cooperation to prevent smuggling activities between the two countries.”

Iraqi security expert Hisham al-Hashimi said, “The Iraqi-Saudi border was safe under the worst security circumstances in Iraq.” He added, “Focus will be more on the economic than the security dossier in the opening of the Iraqi-Saudi border crossings. Terrorists have not entered Iraq via this border, which was well protected by the Saudi side. Also, the smuggling activities that took place were rare.”

The opening of border crossings between the neighboring countries will help boost the Iraqi economy. Yet, more importantly, after years of tepid bilateral relations, the open crossings will create a regional balance of power in Iraq and promote ties between Baghdad and Riyadh.