In the context of strengthening economic relations, Iraq and Saudi Arabia are diversifying their trade outlets, intending to increase trade exchange to more than $3 billion annually. 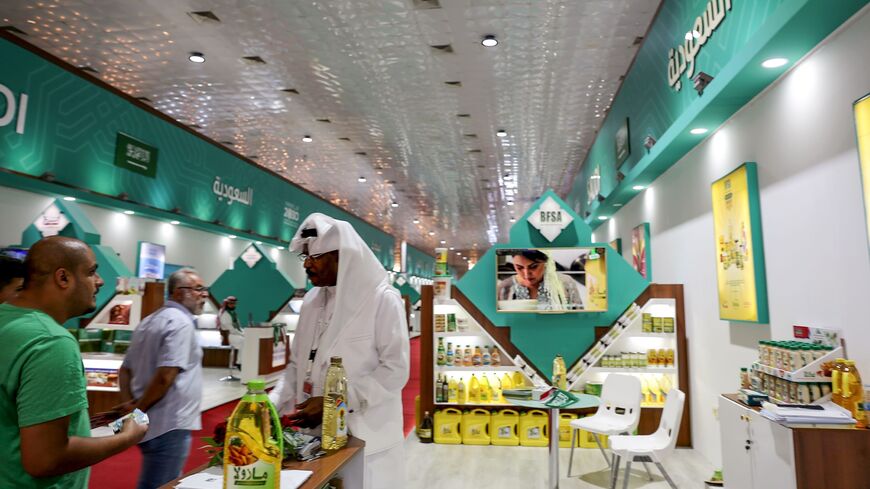 A picture taken on October 21, 2017 shows Saudi food products on display at the Saudi Pavilion at the Baghdad International Fair in the Iraqi capital. - SABAH ARAR/AFP via Getty Images

Iraq and Saudi Arabia agreed on Nov. 6 to open a second border crossing between the two countries.

Iraqi Prime Minister Mustafa al-Kadhimi and Saudi Crown Prince Mohammed bin Salman have both advocated economic openness and more expansive economic integration in the Gulf. The opening of the Arar crossing in 2020 was a first step to reopen the four border posts that were closed after the second Gulf War. Trade between the nations currently amounts to $1 billion annually.

Iraqi-Saudi relations began to improve with the government of Haider al-Abadi in 2017; a Saudi embassy has since opened in Baghdad, and the Iraqi-Saudi Coordination Council was established.

A well-informed source in the Iraqi Central Bank told Al-Monitor that a large banking delegation will visit Saudi Arabia, headed by Central Bank Governor Mustafa Ghaleb, on Nov. 19, and that Saudi Arabia has agreed to open two branches of the Trade Bank of Iraq and the National Bank of Iraq. A similar delegation visited Saudi Arabia in October and agreed to open the two branches, which will develop banking and economic relations.

Alaa ad-Din al-Qaisi, spokesman for the Iraqi Border Ports Authority, told Al-Monitor that Saudi Arabia agreed to establish the al-Jumaima crossing in the Muthanna governorate, and it will bear the cost of its construction on the Iraqi side. The authority approved the Saudi proposal in its last meeting, but it may need over a year to establish it.

The Muthanna governorate has the highest poverty rate in Iraq, with 52% of the population living below the poverty line, and the al-Jumaima crossing will be very beneficial. In addition, the Iraqi Ministry of Electricity made it the main point for connecting electricity between Iraq and the Gulf states via Saudi Arabia.

Muthanna governor Ahmed Manfi told Al-Monitor that the new border crossing is very important to the governorate, which has allocated 125 acres for the project, including the commercial exchange yard. All the necessary steps have been completed, he said, and "It will significantly contribute to revitalizing the trade movement between Saudi Arabia and Iraq.”

Manfi pointed out that the port will increase investment in addition to employing workers in the governorate, making it a center for transporting Saudi goods to other Iraqi cities.

Karim Mohammed, head of the Muthanna Chamber of Commerce, told Al-Monitor that his group would use about 12 acres to build warehouses to store Saudi goods before they are transferred elsewhere in Iraq. The new crossing will cut the transportation time of Saudi goods in half, he said, and "more job opportunities will be available to the population.”

Saudi Arabia has requested to develop one million hectares of the Muthanna desert to establish dairy, seed, and feed factories, and farms, depending on groundwater. However, Shiite militias  in southern and central Iraq have threatened to target Saudi and Emirati investments in the country on several occasions.

Through social media, the Shiite militias have led multiple campaigns to prevent Saudi companies from entering Iraq, specifically in the Anbar desert, to invest in the Akkas gas field and establish clean energy power stations in Muthanna.

Saudi Arabia wants a significant share in the Iraqi market, to compete with Iran, Turkey, and China, but the Arar border crossing is not enough to do so.

In addition to trade, the Jumaima port will help transport Iraqi, Iranian, and Turkish pilgrims to Saudi Arabia during the Hajj season. Iraq will also benefit from fees for the passage of trucks to neighboring countries, but this will be rare at first due to the current regional tension.

Saudi Arabia plans to open two other crossings: Hafar al-Batin on the Basra side and al-Awaqilah on the Najaf side. The expansions could raise trade exchange with Iraq to more than $3 billion annually. Still, it may face great difficulties, because all the borders with Saudi Arabia fall within Shiite governorates, within range of the Iranian-backed militias.