Saudi Arabia is seeking to enter the Iraqi market aggressively, along with a political presence, and increase the competition with its opponent Iran in the Iraqi arena. 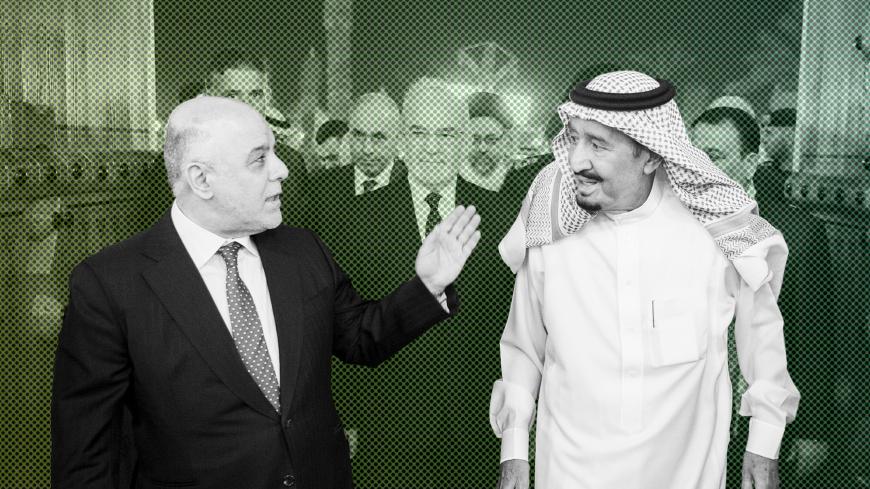 Reza Tajrishi, president of the House of Industry, Mine and Trade of Iranian Youth in Iran, conceded April 17 that his country is losing its appeal in Iraq’s markets to Saudi Arabia. Tajrishi’s declarations reflect a bitter competition between Iran and Saudi Arabia to take over the Iraqi market, a major consumer of foreign exports in light of an absent local industry sector.

Tajrishi placed the blame on Iraq, saying, “The government of Iraq bars many Iranian companies from operating, while the doors are wide open for the Saudis — thanks to reduced customs fees on Saudi goods per an understanding between the two sides.”

“There is an intense competition between Saudi and Iranian goods,” Salem al-Azzawi, a retailer in Babil, told Al-Monitor. “The same vendors who were known for dealing in Iranian goods are now selling Saudi goods. Whoever can offer the best quality and the best prices usually wins.”

Azzawi said, “Some Iran-aligned political individuals have voiced their criticism of the Saudi economic and commercial activities in Iraq’s markets, as they see that it is driven by the political agenda. The source is not much of a concern to the Iraqi consumer compared to the quality of the product.”

Nonetheless, Azzawi downplayed the statements made by Tajrishi, as he considered them “unrealistic,” noting that “there are deliberate attempts to exaggerate the Saudis’ economic influence in the Iraqi markets.”

He added, “If you walk in the markets, you can see that Iranian goods appeal to consumers more. That's because they are cheaper than the Saudi goods following the drop in [the value of the] Iranian currency.”

On Feb. 5, 2017, Saudi Minister of Foreign Affairs Adel al-Jubeir visited Baghdad, marking the resurgence of Saudi-Iraqi relations, after a 14-year gap. During the visit, he stressed his country’s hope to establish excellent relations with Iraq.

Saad Hassan, a merchant in Baghdad who sells foodstuff, said that both Iran and Saudi Arabia are striving to win over the Iraqi market. He told Al-Monitor, “Iranian and Saudi goods are dominating the food and construction sectors, while Turkey is still standing unopposed as an importer of clothes.”

Hassan noted, "The last two years saw a larger influx of Saudi goods, which hurt the demand of Iranian goods. [While] Iranian goods still have a stronger presence in the center and south [Shiite areas], Saudi goods are notably becoming more popular in the west of Iraq [Sunni areas],” because of political and sectarian allegiances, as well as media-charged instigation.

In contrast to Hassan’s point of view, which reflects the popular opinion, the Iraqi government narrative undermines the "Iranian grievances" on the taxation and customs procedures.

Mustafa al-Ragheb, the spokesman for the Iraq General Customs Commission, told Al-Monitor, “The commission specifies customs fees in accordance with the law on tariffs that came into force in 2010. This applies to all goods regardless of their source, with no favoritism to one country at the expense of another.”

As Ragheb denies "any kind of agreement between Baghdad and Riyadh to reduce customs fee on Saudi goods," economist and former adviser to the Ministry of Women’s Affairs Salam Smeasim disagrees with the Iranian official’s statements, stressing that “the Iranian exports to Iraq exceed $15 billion annually.”

Trying to add context to Tajrishi’s statements and any other Iraqi decision on that matter, Smeasim said, “The state tries to incentivize exports from a certain country and gives it priority in trading facilitation — as what Iraq did with Jordan in February when it decided to exempt 540 products from customs fees. This tactic is used by some states to serve some special joint interests.”

According to Iranian sources, Iraq is the second-largest export destination, as their exports range from construction supplies and petroleum products to mineral oils and food supplies.

Speaking to Al-Monitor, head of the parliamentary Economy and Investment Committee Ahmed al-Kanani said that the Iranian accusations “are baseless and there is nothing in Iraq’s customs policy to support those claims,” as Iraq’s customs policy reflects "open attitudes toward all neighboring countries to attract investments and capital."

The presence of Saudi Arabia with its well-known companies will increase, which will heat up the competition with Iran, according to Kanani. He noted that Iraq must maintain balanced relations with both Saudi Arabia and Iran.

While Saudi Arabia and Iraq agreed on Oct. 22, 2017, to establish the Saudi-Iraqi Coordination Council and review the customs cooperation arrangement between the two countries — as well as considering a trade area, repurposing 2 million hectares in the governorates of Anbar and Muthanna, and investing in the Akkas gas field in Anbar governorate, west of Iraq — the secretary-general of the Iraq-Iran Chamber of Commerce made sure to emphasize April 3 the likelihood of increasing Iranian trading with Iraq to $15 billion annually in parallel with the reconstruction.

In addition, Iranian Ambassador to Iraq Iraj Masjedi was quick to assert April 27 that Iran’s economic activities in Iraq are healthy and developing, calling on Iranian companies to boldly utilize the collaboration and investment opportunities in Iraq.

According to Hassan al-Shwyered, head of the Iraqi-Gulf Friendship Committee and a parliament member, Iraq is determined to strengthen its economic relations with Saudi Arabia. He told Al-Monitor, “The trade exchange between the two countries will be at its optimal levels after the Jemima border crossing is completed — which will be soon — the land road for all trucks to enter Iraq’s neighboring countries is rehabilitated and the railway is constructed.”

As Shwyered stressed that “enhancing the trade exchange with Saudi Arabia doesn’t mean that Iraq will shrink its trade with Iran,” Iranian officials should realize that Iraq, as a state, will go wherever its interests lie. Iraq prefers to distance itself from the political, and even economic, quarrels between Tehran and Riyadh, a stance that Iraqi Prime Minister Haider al-Abadi has been clear about since 2015.