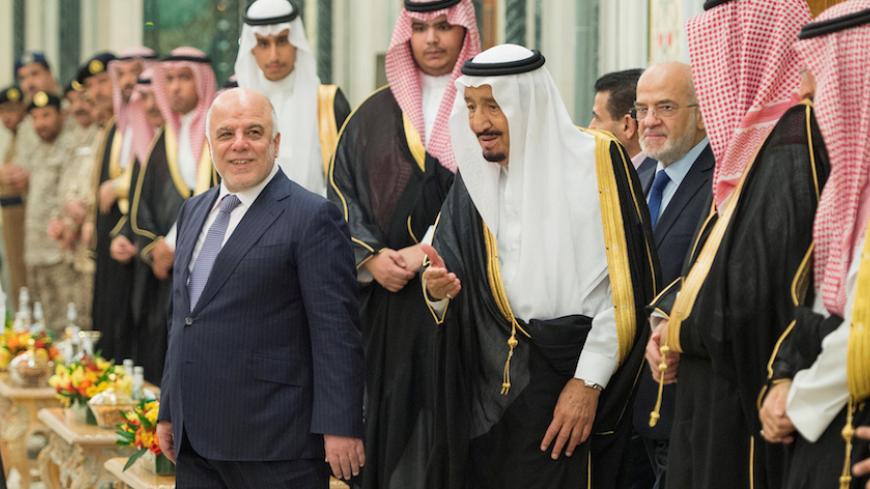 BAGHDAD — Iraqi Prime Minister Haider al-Abadi's foreign tour this week included three stops, most notably Saudi Arabia. It was his first visit to the country since he assumed his position about three years ago. Also, the visit occurred at a time when Gulf relations are going through a historic crisis that erupted after Saudi Arabia, Bahrain and the United Arab Emirates officially cut ties with Qatar.

Before leaving for Saudi Arabia, Abadi said in a May 17 meeting attended by Al-Monitor and a group of media professionals that his visit to Saudi Arabia was planned more than a year ago and that he would not discuss the Gulf crisis. He also added that Iraq will not take part in the crisis in any way whatsoever.

“The visit to Saudi Arabia aims to strengthen the relationship between the two countries, especially on the economic level, as Riyadh promised to provide facilitations to Iraqi investors and contribute to the reconstruction of Iraqi cities liberated from the Islamic State [IS], in addition to raising the level of security coordination between the two countries in the fight against terrorism.”

The meetings mainly led to the establishment of a “joint coordination council,” as per the Saudi-Iraqi joint statement, “in order to take into account everything that could strengthen the bilateral relations between the two countries to the desired strategic level; open new horizons of cooperation in various political, security, economic, development, trade, investment, touristic and cultural fields; activate the partnership between the private sectors of both countries; and follow up on the implementation of the agreements and memorandums of understanding signed between the two countries in order to achieve common goals.”

However, some international newspapers, including Emirati daily The National, revealed that Abadi is mediating to calm the situation in the region and end the state of tension between Saudi Arabia and Iran, especially as the Iraqi prime minister’s jet flew from the city of Mecca directly to the Iranian capital city of Tehran in a move aimed at achieving political balance and playing an implicit role in mediation.

Adnan al-Sarraj, a member of the State of Law coalition and a close associate of the prime minister, told Al-Monitor that Abadi “had no plans of officially mediating between Tehran and Riyadh, but he repeatedly expressed hope that the hostility that reached the level of direct threat between Saudi Arabia and Iran would end.”

Sarraj added that “Iraq is the most qualified party to play the role of mediator because it is the first victim of any clash that takes place in the region. Meanwhile, Iraq has good relations with everyone — but the main objective of the Abadi tour is to urge these countries to help reconstruct the cities liberated from IS.”

Sarraj denied reports that Abadi's visit to Tehran was a spur-of-the-moment thing and unplanned, as opposed to the statements made by some officials in Iran, including Iranian Deputy Foreign Minister Hossein Jaberi Ansari. These statements expressed Iran’s unwillingness to receive Abadi, which reflected the country’s discontent at Iraq’s openness to Saudi Arabia and mediation attempt with Riyadh.

Abadi arrived in Tehran June 20 and met with President Hassan Rouhani, parliament Speaker Ali Larijani and Supreme Leader Ayatollah Ali Khamenei, who stressed during his conversation with the Iraqi delegation the need to maintain the Popular Mobilization Units (PMU), which he described as “a blessed fruit and one of Iraq’s backbones.” Khamenei also praised the arrival of the PMU to the Syrian border as “a major strategic step” and warned Abadi against confiding in the Americans and following their policies in Iraq.

“The goal behind the timing of the two visits is to deliver a message of reassurance to Iraqis and the regional powers that the Iraqi government will not side with a regional party against another and will reject the policy of regional axes,” the source added.

Asked about reports that Iraq is seeking to mediate between Saudi Arabia and Iran or even interfere in the Gulf crisis, the source said, “There were no mediation attempts, but Iraq expressed its position on the current crises in the region and explained that [Iraq] is the most affected party therein. Abadi stressed the need to fathom Iraq's domestic situation and establish calm.”

Abadi's visit to Kuwait was symbolic after the visits to Saudi Arabia and Iran, whose competition in the region has largely contributed to the majority of the regional crises. Kuwait has initiated an intermediation between Saudi Arabia and Qatar. Iraq also has proposed an intermediation between Iran and Saudi Arabia. Knowing that Qatar's relationship with Iran was one of the reasons behind the Gulf rupture with Qatar, Abadi's visit to Kuwait can strengthen the role of the moderate group (Kuwait, Iraq and Oman) in the region to bring the enemies together and solve the crisis in the Gulf.

On May 21, the Iraqi delegation met with Kuwaiti Emir Sheikh Sabah Al-Ahmad and discussed with him the possibility of postponing the indemnities of the invasion of Kuwait in 1990, which amount to about $4 billion, and called for bringing Kuwaiti investments to the Iraqi provinces that suffered from the war against IS.

Abadi’s success in gaining excellent relations with Saudi Arabia — which also infers strengthened relations with the UAE, Bahrain and even Egypt — and in restoring diplomatic representation to the highest levels while attracting Saudi investments will put Iraq to the test and require it to prove that it is not siding with the Saudi axis that is hostile to the Iranian axis. This will probably lead the country to lose some of its Shiite allies who reject any Saudi role in Iraq.