Saudi Arabia is working to reconcile with Iraq to reduce Iranian influence in the country. 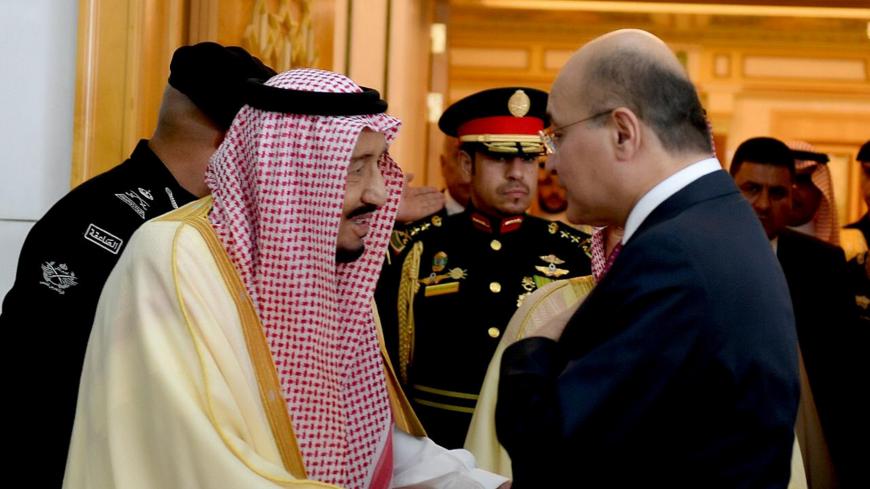 Falih al-Fayadh, head of the Popular Mobilization Units and Iraq's national security adviser, visited Saudi Arabia Jan. 31 in a sign of the new and improved ties between the two countries.

As Fayadh is close to Iran and widely viewed as a pro-Iran candidate for interior minister in the government of Prime Minister Adel Abdul Mahdi, his visit aimed to reassure Riyadh that the PMU will target neither it nor its interests in Iraq.

A few days before Fayadh’s visit to Saudi Arabia, Riyadh renewed its support for Baghdad, especially in terms of security, in a Jan. 24 phone call between Saudi Crown Prince Mohammed bin Salman and Abdul Mahdi.

In light of the tension prevailing over the region, the phone call emphasized Riyadh’s desire to make up for the past and create a positive relationship with Iraq.

On the day of the call, Abdul Mahdi received the Saudi ambassador to Baghdad, Abdul Aziz al-Shammari, who conveyed an official invitation from Saudi King Salman bin Abdul-Aziz Al Saud for Abdul Mahdi to visit Riyadh.

The growing communication between the two neighboring Arab countries must be suspenseful for Iran, particularly since Tehran has had no Arab competitor in Iraq for the past 15 years.

Despite the recent developments, some believe that the improving relationship between Iraq and Saudi Arabia should not be perceived as Saudi moves against Iran.

Hamid al-Kifai, writer for London-based Al-Hayat, told Al-Monitor, “The new Saudi approach toward Iraq is in the interest of Baghdad. We should not think that any Saudi approach to rapprochement with Iraq is directed against Iran. Iraq can cooperate with both Iran and Saudi Arabia, and it does not matter if there are differences between them. This is normal between all countries.”

Kifai added, “The Saudi-Iraqi rapprochement is of utmost importance to the two countries, which are bound by geography, economy, culture, politics and security. Both should agree on many issues including security, economic, political and cultural cooperation. This need for cooperation should not be ignored any longer; the two should have rebuilt stronger ties since 2003 or 2004.”

It also appears that Saudi Arabia wants to build positive relations within Iraq to include a wider circle of government and state institutions by hosting leading figures in the parties, not only Sunnis but Shiite figures as well, including Sadrist Movement leader Muqtada al-Sadr and National Wisdom Movement leader Ammar al-Hakim, both of whom have visited Saudi Arabia.

The Saudi-Iraqi rapprochement is not limited to politics and security discussions. Saudi Arabia is also focusing on economic interests. It has concluded with Iraq 16 agreements through the coordination council between the two countries, including one to operate flights and a sea transportation line. The two also signed an agreement to invest one million hectares of Iraqi land in an agricultural investment project that will turn the land into farms.

Abdul Mahdi said that the Iraqi-Saudi relations are improving, saying during his phone call with bin Salman that he “welcomes this rapprochement between the two brotherly peoples.”

Rahman al-Jubouri, a former senior researcher at the Washington-based National Endowment for Democracy, told Al-Monitor, “Saudi Arabia believes that Iraq is part of the national security system and the Arab security in general. Any bad relations can affect this system.”

Jubouri added, “Saudi Arabia also believes that the stronger Iraq’s relationship with it gets, the weaker it will be with Iran, or at least that there will be balanced relations between the two sides, Iran and Saudi Arabia. This is how Saudi support for Iraq is linked to internal Iraqi variables.”

Saudi Arabia is working intensively to achieve a relationship with Iraq that will help it to reduce Iran's influence or compete against it in the Iraqi political process and in the economy and security realms. The United States could play a part in supporting this rapprochement, which will ultimately benefit Baghdad, since Washington and Riyadh have a common interest in reducing Iran's role in Iraq.

By rebuilding strong ties with Iraq, Saudi Arabia aims to kill two birds with one stone, reducing Iranian influence in Iraq and winning over Iraq in the Gulf crisis. Riyadh sees Iraq as a needed partner in its feud with Doha as Qatar gradually gets closer to Tehran.

Saudi Arabia believes Iraq is an essential part of the Arab world and should not be left alone again for Iran to grow its influence, as it had been since April 2003 up until two years ago, when Saudi Arabia reopened its embassy in Baghdad

One can say that the relationship between Baghdad and Riyadh has measurably improved after years of estrangement, and a new phase has begun to achieve joint cooperation through economic and political projects after years of efforts to build mutual trust.