Prime Minister Hader al-Abadi is facing a very problematic challenge as the United States wants to use Iraq as a place to confront Iran. 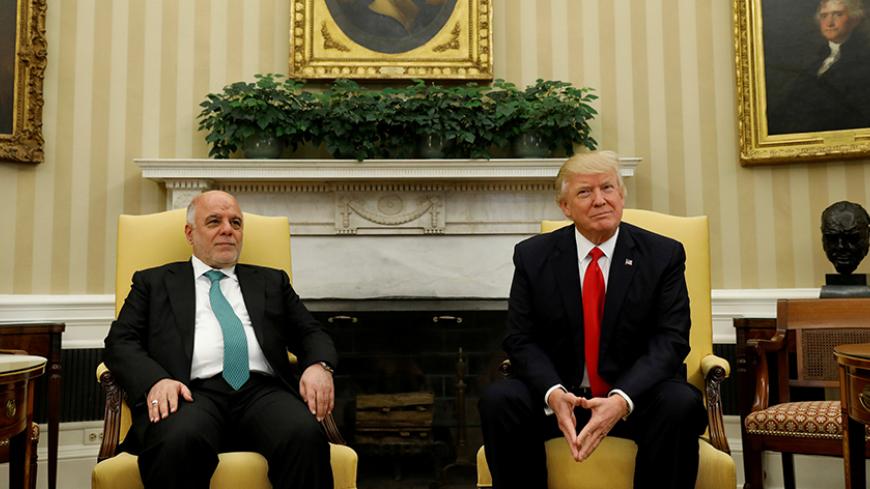 BAGHDAD — After the chemical attack in Khan Shaykhun on April 4, followed by the US airstrike on a Syrian air base April 7, tension between Iraq and the United States escalated significantly.

The United States has made it very clear to Iraq that it wants its ally in fighting terrorism to distance itself from Iran. During Iraqi Prime Minister Haider al-Abadi's visit to the United States last month, Abadi and US President Donald Trump discussed Iran, Saudi Arabia and the Popular Mobilization Units (PMU), which indicates that the United States is seeking to bring Baghdad and Riyadh closer and to curb the Iranian role in the region. The visit sparked much controversy in Iraq among Shiite parties.

Moreover, Trump explicitly criticized the Iran nuclear deal in front of Abadi. A few days later, Trump sent his senior adviser and son-in-law Jared Kushner to Iraq to discuss US support to Iraq in the fight against the Islamic State. The visit was read as a sign that the “Trump administration sees Iraq as a place to push back on the growing power of Iran across the region.” Al-Monitor learned from a source close to the prime minister who asked to not be named that limiting Iran's role in Iraq was at the top of the list of the issues discussed between the two parties.

The National Iraqi Alliance said it was not aware of the details and meeting schedule of Abadi with the American administration. Other Shiite political parties expressed discontent with the visit, especially following the statement of Hisham al-Hashimi, an Iraqi security and political expert, in Asharq al-Awsat newspaper. Hashimi said he received information from the Iraqi delegation to Washington that “the American discussed with Abadi the danger of ‘believers in the velayat-e faqih [a jab at Iranians] and the need to keep them out of the PMU.”

During his visit to the United States, Abadi talked about efforts to limit the PMU role at the political level, and expressed desire for rapprochement with Saudi Arabia, especially following his meeting with Saudi Foreign Minister Adel al-Jubeir on the sidelines of the Ministers of the Global Coalition meeting in Washington on March 22.

Pundits believe that Trump’s meetings with Saudi Deputy Crown Prince Mohammed bin Salman on March 14 and with Abadi on March 20 come in the same context of the new Arab inclination toward Iraq, in line with Washington’s policy, seeking to curb Iran’s role in the region.

This is especially true since during the meeting between Trump and Prince Mohammed — who also is Saudi Arabia's defense minister — participants openly touched on the risks of the Iranian influence in the region and that there is no better place than Iraq to start curbing the Iranian role.

Therefore, the US support of Abadi will depend on his effort to reduce Iranian influence in Iraq, and to dissolve or restrict the parts of the Shiite armed factions under the PMU that are affiliated with Iran.

Perhaps Trump’s exceptional reception and welcoming of Abadi amid what was described as positive talks were a message to Shiite leaders in Iraq about Abadi’s leaning toward the United States' clear and declared policy against Iran and the forces loyal to it.

However, Abadi is likely to pay dearly for such a stance, as he would have to face Iran’s allies in Baghdad, namely the PMU leaders.

“We hope that Abadi’s visit to the US will be supportive of the PMU, as in his supportive stances at previous international forums,” PMU spokesman Ahmed al-Asadi said at a March 22 press conference.

He added, “We hope that he [Abadi] would talk through these conferences and visits, about the great role the PMU has played, as a security institution, especially after passing the law to legalize it.”

Asadi said the “PMU has become an independent military and security institution affiliated with the armed forces and directly linked to the commander in chief of the armed forces. The PMU will play a major role with the rest of the security services to build an integrated security system.”

However, Sheikh Qais al-Khazali, head of the League of the Righteous, another faction under the PMU, had a stronger message to relay. During his meeting with a group of tribal sheikhs and dignitaries March 23, he said, “The US aims to strengthen its influence in the areas west of Iraq and east of Syria and to start the partition project.”

He warned against what he considered a “dangerous conspiracy against the PMU,” saying, “We will not allow any attempt to dissolve or undermine the PMU.”

On the other hand, the National Alliance fears a new split [within the Shiite ranks] because of Abadi’s statements and positions in Washington, according to Alia Nassif, a member of parliament for the alliance.

“The alliance’s blocs will not rush to judge Abadi’s positions, and will seek to know how serious he is in his efforts to curb the PMU role and to submit to Trump’s policy facing Iran or to lean toward the US-Gulf axis. The coming weeks will tell where Abadi stands, and this is when the alliance will take a clear stance toward Abadi.”

“According to the information we have, the US intends to increase the number of its fighters in Iraq and that the American president is seeking to have access to the country’s oil in return for military support. Should Abadi approve that, major political chaos will erupt in Iraq,” she added.

Political scientist Mohammed Naanaa told Al-Monitor, “Prime Minister Haider al-Abadi will try to convince the Shiite parties that he has taken the position of mediator between Saudi Arabia and Iran to maintain American support, which is the role he can actually play. Abadi cannot afford to turn his back on Tehran or lose US support.”

Naanaa said, “The real confrontation will be between Abadi and the PMU, and he will have to resort to the Sunni forces and the Sadrist movement, who seek the same goal — that is the dissolution of the PMU.”

He said it was unlikely for Abadi to remain within the State of Law coalition led by Nouri al-Maliki, the former prime minister who is pro-Iran.

As the dust settles in the war on IS and amid the expected liberation of Mosul in the coming weeks, Abadi will have to meet US demands concerning the PMU and Iran's allies. In this context, he can actually resort to his undeclared ally Muqtada al-Sadr to confront the PMU factions, but Abadi would then be in direct confrontation with Sadr if the US administration wants to keep its soldiers inside Iraqi territory, which the Sadrists consider a red line that cannot be crossed.

In the meantime, Abadi is ready for the battles involved in local elections at the end of this year and the general elections early next year, distancing himself from Maliki without angering Iran. Will he be able to overcome all of these challenges, even with the help of a strong ally like the United States?