Iraqi Prime Minister Haider al-Abadi faces a great challenge in dealing with the predominately Shiite Popular Mobilization Units fighting in Iraq, as some of its factions are refusing to be integrated into the army and other security forces. 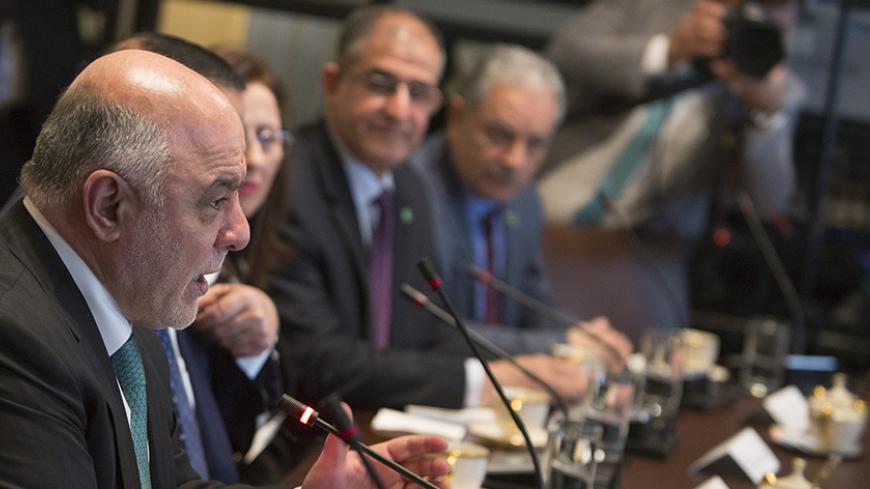 Some factions of the Popular Mobilization Units (PMU) are less than satisfied with the visit of Iraqi Prime Minister Haider al-Abadi to Washington on March 19-23, given his controversial statements about his stance toward them.

Abadi said March 22, during his speech to the 68-member global coalition to defeat the Islamic State (IS), “There is an Iraqi force today fighting IS comprising the Iraqi army, the counterterrorism apparatus and the peshmerga [forces].” He did not include the PMU, but later, in a different context, he mentioned them as “volunteers who took part in the fighting against IS side by side with our security forces … under the command of our security forces.”

He then referred to the Popular Mobilization Law, which requires "[PMU forces] to be under the leadership of the state and obey the Iraqi military regimes and Iraqi discipline in the military establishment." Abadi also pledged to confront "outlaws."

In the same vein, Abadi stressed in reference to the PMU that "they should not become involved with politics, and political groups bearing arms should not participate in the elections." He stressed the need to "confront any armed groups outside of the state."

During his first meeting with parliamentary blocs March 28, following his return from Washington, Abadi hinted that he is considering distributing the PMU members and factions among different state security branches, in the framework of his commitment to limit weapons in the hands of the state only.

Abadi appeared very confident after his return from Washington, as he announced the opening of major economic projects with the participation and support of the United States.

Abadi also praised the US stance toward Iraq during a press conference March 27. “There is a new group inside Congress that says they will not allow anything against Iraq, and they love Iraq. Frankly, I found out that Iraq’s shares are still up abroad, whereas some consider Iraq has come to a dead end. But they now praise the courage of Iraqis in reclaiming the lands from [IS].”

Abadi’s statements raised the suspicions of some PMU leaders who think he betrayed them. Aws al-Khazraji, the secretary-general of Abu al-Fadl al-Abbas Brigade, quoted Abadi as saying to the Americans, “We will reward the PMU by letting them join the Iraqi army, and those who do not wish to do so will be disarmed.”

Khazraji said, “This is overriding the parliament decision. We will never accept the PMU integration in the Iraqi army."

For his part, Qais al-Khazali, the secretary-general of the League of the Righteous, warned March 27 about an American conspiracy against Iraq, saying, “We will not allow any attempt to undermine the PMU.”

Opposite to Abadi's view, Khazali stated Feb. 27 that “the PMU will be present in the political life as it was present on the battlefield. It will work on eliminating corruption. The PMU is here to stay.”

As per the PMU Law that was passed by the Iraqi parliament in November 2016, PMU members are not allowed to get involved in any political, partisan or social frameworks — no political work is allowed within the PMU ranks.

In an attempt to reduce tension between him and the PMU, Abadi met March 25 with a number of PMU leaders and told them, “We will not allow anyone to undermine the rights of the heroes fighting in the PMU. Some are trying to take advantage of the blood of those heroes for other purposes.”

“Our talk with the US administration was clear. … We have heroic fighters in the PMU without whom our victory would not have been possible. It is our duty to protect their rights,” Abadi said.

He added, “All weapons must be under the state, and we will never allow any arms outside its framework. Some claim to belong to the PMU only to harm it.”

It appears that Abadi is facing a great challenge with regard to the issue of the PMU. He is stuck between the United States, Arab countries, and local Sunni and Kurdish parties pressuring him to dissolve the PMU, while Iran and its political allies are pushing in the other direction. The latter want to keep the PMU as an independent force with its own political, security and economic agenda to be able to build a statelet inside the state, as is the case with the Islamic Revolutionary Guard Corps in Iran and Hezbollah in Lebanon.

There are three plausible scenarios in this case. First, Abadi will have to dissolve the PMU and integrate its factions into the state’s security branches — a step that would be welcomed by the Sunni forces, Arab countries and the United States, as well as the Shiite authority represented by Ayatollah Ali al-Sistani and Muqtada al-Sadr.

Sadr latter announced that he would dissolve his militia within the PMU once the war in Mosul is over, and he called for the dissolution of the PMU and its integration into the Iraqi army. However, this would place Abadi face to face with the PMU factions, which could spark fighting among the different security apparatuses under his command.

A second scenario might play out, which is to keep the PMU as an independent security branch in the state as per the parliament law. However, in this case Abadi will not be able to impose his legal control over the factions, as they are commanded by different leaders and not by direct orders from the state. This way, the PMU will continue to play its illegal regional role supported by Iran and extend its influence over the country under a legal pretext, which would jeopardize Abadi’s relations with the United States, Arab countries and other Iraqi parties against the PMU.

The third and last scenario, which could be the best solution for Abadi, is for Sistani to issue a fatwa calling on the PMU volunteers to leave the PMU ranks and go back to their old lives or join the army. This would help Abadi apply the first scenario without the possibility of a clash between factions, as they do not dare confront Sistani, given that the PMU was established as per a fatwa issued by him. Back then, Sistani said that this group would be temporary and would not operate outside the framework of the army and the Iraqi security apparatuses. Al-Monitor learned from a source close to the Sistani office that he is planning to support Abadi in confronting the outlaws after the end of IS.