In an important move amid US-Iran tensions, the Iraqi prime minister issued a decree ordering the Popular Mobilization Units to come under the full control of the state. 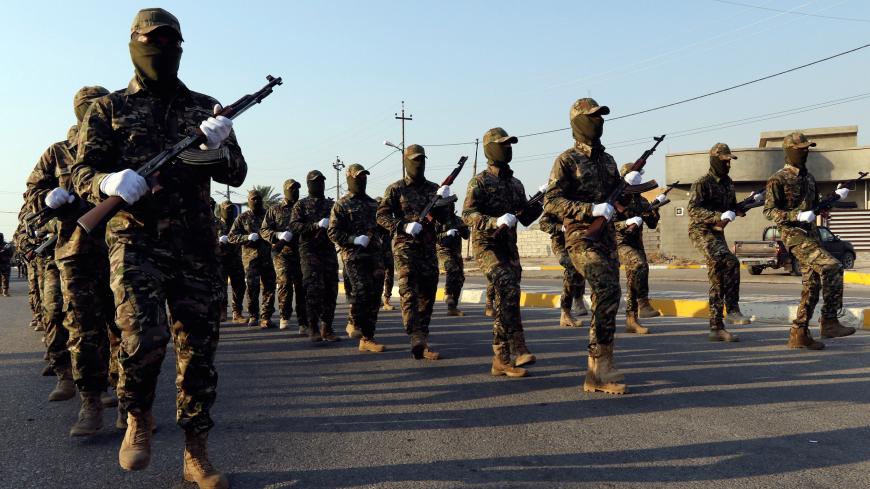 Members of Iraqi Popular Mobilization Units take part in a military parade in the town of Taza, south of the northern oil city of Kirkuk, Iraq, June 28, 2019. - REUTERS/Ako Rasheed

According to the decree, all the military factions within the PMU must retire their political and military affiliations and come under the full control of the prime minister as the commander in chief of the armed forces.

Former Prime Minister Haider al-Abadi issued a similar decree in May 2018, but it has not been fully implemented, as some factions in the PMU are still affiliated with political parties and are under Iranian influence. After US-Iran tensions rose, Harakat Hezbollah al-Nujaba, a PMU organization, threatened to target US interests in Iraq as appropriate. Several US interests were targeted, most recently in southern Iraq, where an Exxon Mobil site was attacked by rockets.

According to Abdul Mahdi’s decree, all PMU factions must abandon their old names and receive new names in compliance with the regulations of the Iraqi army. The decree forbids political parties and parliamentary blocs from having ties with the PMU factions. It obliges the PMU factions to choose between political and paramilitary activity and remaining within the state’s security forces. If they choose to continue engaging in politics, they are not allowed to carry weapons. Also, all the headquarters, economic offices and checkpoints manned by militias are to be shut down.

“In the interest of the public good and as per the powers granted to us by the constitution … all Popular Mobilization Units are to operate as an indivisible part of the armed forces and be subject to the same regulations,” the decree reads.

The decree gave the militias until July 31 to abide by the new regulations, otherwise they will be considered outlaws.

Ayatollah Ali Sistani, the top Shiite authority, demanded that PMU factions come fully under the control of the state. Sistani and his representatives have never actually mentioned the PMU by name in their statements and speeches, which indicates he is against the presence of independent military forces separate from the state.

Prominent Shiite cleric Muqtada al-Sadr also welcomed the decree and announced he will abide by it. Sadr was one of the first to establish a militia after the 2003 US invasion of Iraq and receive military and financial support from Iran to fight US forces. Over the last few years, he has adopted a nationalist discourse opposing Tehran’s influence.

“What came from the prime minister on the PMU is an important thing and a correct first step toward building a strong state,” Sadr said in a statement.

Sadr announced that he ordered his military faction within the PMU, Saraya al-Salam, to close its headquarters and dismantle, putting it under the full control of the state. However, he expressed doubt that all PMU factions would do the same, in reference to the Iran-backed militias such as Nujaba and Assayeb.

Qais al-Khazali, the head of Asaib Ahl al-Haq, also welcomed Abdul Mahdi's decree. "The recent decision of the prime minister is a step in the right direction to be a professional and stable part of the armed forces and it stops all attempts to dissolve or merge it," he tweeted.

Khazali's statement implies that he is not willing to merge with the Iraqi security forces as a united force, but would remain a parallel force under government supervision.

The Badr Organization described the decree as not new. “All the PMU factions are already under the supervision of the commander in chief of the armed forces,” said Hassan al-Kaabi, the head of Badr's parliamentary bloc.

Iranian Supreme Leader Ali Khamenei has frequently requested that the Iraqi government not dissolve or integrate the PMU into the Iraqi army.

As a parallel force, the PMU factions are able to operate separate from the army, perhaps leading to activities that could cause trouble for Iraq with the United States or regional powers.

According to a Wall Street Journal report June 28, US officials have concluded that drone attacks on Saudi Arabia’s oil pipeline last May were launched from Iraq, not Yemen, which raised the concerns over the activities of Iran-backed militias in Iraq.

US Secretary of State Mike Pompeo spoke with Abdul Mahdi June 14 in a phone call, thanking him for the continued efforts to counter threats to Iraq’s sovereignty from Iran-backed militias. Pompeo also made a surprise visit to Baghdad last May, advising Iraqi officials that if they failed to rein in Iran-backed militias, the United States would respond with force in case of any attacks on US interests.

Although Abdul Mahdi's move is an important step to prevent Iraq from becoming a battleground between Iran and the United States, there is no guarantee that the pro-Iran militias will abide by the decree.

by Murielle KASPRZAK and Joseph SCHMID | AFP | May 26, 2022
END_OF_DOCUMENT_TOKEN_TO_BE_REPLACED