Iraq's prime minister made a surprise visit to Tehran to request Iranian help in controlling Iran-backed militias in Iraq. 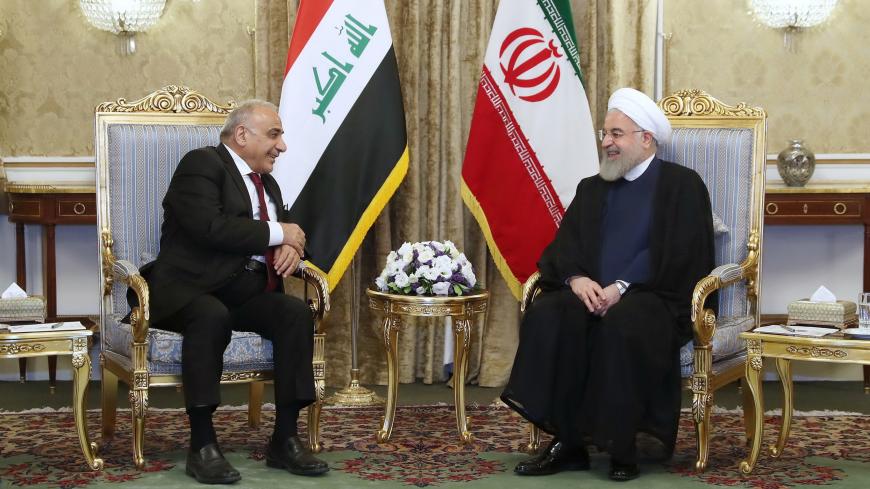 Iraqi Prime Minister Adel Abdul Mahdi made a surprise six-hour visit to Tehran late Monday. He was accompanied by a high-ranking Iraqi delegation including Falih al-Fayyadh, the head of the Popular Mobilization Units, or PMU.

Abdul Mahdi met with President Hassan Rouhani and discussed the PMU dossier and the impact of Iran-US tensions on Iraq. Rouhani reassured Abdul Mahdi that Iraq would be kept at a distance from the current tension. He further stated that Iran would assist Iraq in bringing all PMU factions under state control.

Abdul Mahdi issued a decree last month ordering all PMU factions to merge with state forces and come fully under his command as chief of the armed forces.

"All PMU personnel will be integrated into the police and army ranks according to Iraqi military regulations," stated the decree. Abdul Mahdi gave the PMU until July 31 to either abide by the decree or become a political party or civil organization and hand over all weapons to the government.

Some Iran-backed PMU factions, like Kataib Hezbollah, slammed Abdul Mahdi's decree, calling it a regional and international scheme that “would weaken security” and “strengthen the presence and goals of the American enemy, producing another [Islamic State]."

As the deadline nears for the PMU to abide by the decree, Abdul Mahdi is seeking Iranian support in curbing the militias' reign. Sometimes, the PMU acts independent from the Iraqi state and only obeys Iranian commands.

A senior Iraqi official who accompanied Abdul Mahdi on his trip to Tehran told Al-Monitor that the Iraqi delegation received assurances from the highest Iranian authorities — in reference to Iranian Supreme Leader Ayatollah Ali Khamenei — that Iran would assist Iraq in expanding state control over the militias.

Over the last few months, several attacks were launched against US interests in Iraq: at the US Embassy in Baghdad’s Green Zone, on US troops at Balad air base and on an Exxon Mobil oil field in Basra. In return, US Secretary of State Mike Pompeo has warned Iraq that the United States would target Iran-backed militias in Iraq if US interests were targeted.

A PMU base in northern Salahuddin province was bombed last week. Although the United States denied responsibility for the attack, it said it was aware of it before it occurred, raising the possibility that US allies like Israel or Saudi Arabia were involved in the attack.

These developments come in conjunction with rising tensions in the Strait of Hormuz. Iran recently rejected a proposal to form an international coalition to protect the strait. Some EU countries supported a UK proposal for a European naval force to be stationed in the strait following Tehran's seizure of a British-flagged tanker in the Strait of Hormuz. Iranian First Vice President Eshaq Jahangiri said that an international coalition in the Gulf would only bring insecurity to the region and that Iran is capable of providing security to the ships in the Gulf.

Iraqi Finance Minister Fuad Hussein warned July 23 about the dangerous consequences of blocking the strait. "The Iraqi government is concerned about the tension and escalation in the region," Hussein said. "If the Strait of Hormuz is closed, it will be very difficult for Iraq to export its oil, which is a disaster for Iraq."

During Abdul Mahdi's visit to Tehran, Rouhani told the Iraqi delegation that he was committed to “guaranteeing freedom of navigation in the Gulf and Strait of Hormuz," according to an Iraqi Oil Ministry statement.

The senior Iraqi official told Al-Monitor that the Iraqi government is worried about the consequences of tensions between the United States and Iran, especially after the bombing of the PMU base, the seizure of the UK tanker, and the imposition of US sanctions on four Iraqi individuals close to Iran. Abdul Mahdi's visit followed extensive attempts by Iranian and Iraqi officials to reach an understanding on the matter. The source did not reveal the details of the understanding.

A day after Abdul Mahdi's visit, he said the integration of the PMU into the state "will take a long time. It won’t be easy either.” He said he does not intend to dissolve or weaken PMU. The PMU will not be integrated into the Iraqi army, he said. The PMU will act as a separate force under government control. Yet this contradicts his previous statement that he wants the PMU to integrate into the army and the police.

This means Abdul Mahdi is no longer committed to his previous timeline to integrate the PMU by July 28.

Abdul Mahdi said he supports Iran against the US-imposed sanctions, though he did not clarify whether or not he will abide by them. Iraq has abided by the sanctions so far.

Local Iraqi and Iranian media reported that the Iraqi delegation passed along a message from the UK, demanding Iran release its seized tanker. The head of the office of Iran's supreme leader confirmed on Wednesday that the UK sent a mediator to Iran.

The Iraqi government is trying to convince all the parties to the current tensions to agree to exclude Iraq from potential conflicts, which pose dangerous consequences to Iraq.