Despite Iraqi Prime Minister Adel Abdul Mahdi's decree about the Popular Mobilization Units, they have a long way to go to integrate into state forces. 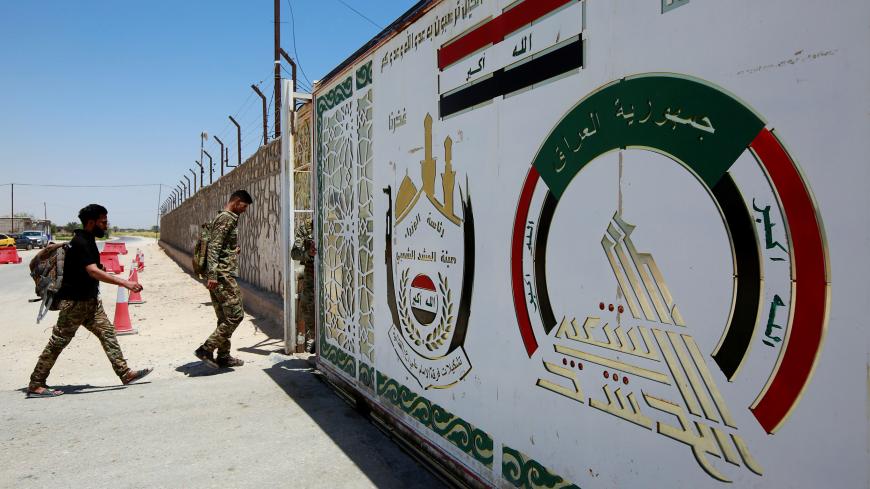 Members of Iraqi Popular Mobilization Units walk as they enter their headquarters in the holy city of Najaf, Iraq, July 2, 2019. - REUTERS/Alaa Al-Marjani

While Iraqi Prime Minister Adel Abdul Mahdi's deadline for the integration of the Popular Mobilization Units (PMU) into Iraq's official security forces passed July 31, there is a long road ahead for this task.

Abdul Mahdi issued a decree last month giving the PMU until July 31 to integrate fully into Iraqi security forces or hand their weapons to the state.

However, after his visit to Tehran, Iran, in late July, Abdul Mahdi changed his tune. He said the integration of the PMU into the state "will take a long time. It won’t be easy either.”

In contradiction with his previous statements, he said the PMU would not be integrated into the Iraqi army and local police but rather would act as a separate force under government control. He also said he does not intend to dissolve or weaken the PMU.

During a meeting with a group of Iraqi journalists on Aug. 3, US ambassador to Iraq Matthew H. Tueller welcomed Abdul Mahdi's decree, noting that many Iraqis joined the PMU to expel IS but "some of them are carrying out actions that don’t serve Iraq’s interest."

The head of the PMU, Faleh al-Fayyadh, reported to Abdul Mahdi on July 31 on the progress of implementing the PMU decree.

"I have sent an order to all PMU factions to close their economic offices across Iraq and this has been already done," Fayyadh said, adding that integrating the PMU factions into official security forces would take more time.

During his weekly press conference July 23, Abdul Mahdi said the implementation of his decree had begun, and that in the first step, all PMU bases were moved away from residential areas. However, Al-Monitor has observed that several PMU military bases and offices are still operating in residential areas in Baghdad and elsewhere.

PMU economic offices are another challenging issue that is difficult to resolve in the short term, despite Fayyadh's statement that they are closed. The PMU is involved in several businesses across Iraq, and it will take time to end their large-scale economic activities. Early this year, Reuters reported that Iran-backed PMU factions are involved in the scrap metal market. Also, the March ferry disaster in Mosul raised public awareness about PMU economic activities; indeed, the ferry belonged to a company affiliated with a PMU faction.

This comes in conjunction with two explosions at PMU military bases in Diyala and Salahuddin provinces in July. The first was at Amorly in mid-July and the second was at Ashraf Camp on July 28. The Asharq Al-Awsat newspaper quoted Western diplomatic sources as saying that Tel Aviv had carried out airstrikes on the two military bases. The PMU denied there had been airstrikes and attributed the explosions to technical issues involving weapons storage. The United States denied involvement.

The Iraqi government remained silent about the explosions.

Also, the recent US Treasury sanctions against some PMU leaders put the leaders in a difficult situation. The Badr Organization led by Hadi al-Amiri slammed the Treasury actions, demanding that the Iraqi government and parliament stand up to the United States and prevent the imposition of more sanctions against the PMU.

Tueller supported his country sanction against the four Iraqi individuals, saying that "such sanctions would consolidate Iraq's sovereignty".

Iraqi politicians see the US sanctions as part of the Preventing Destabilization of Iraq Act, a bill repeatedly introduced in the US House of Representatives but that has never passed the full Congress. The latest version of the bill, introduced in January, was referred to the House Judiciary Subcommittee on Immigration and Citizenship in February.

While the US bill has been bottled up, it is still provoking dismay in Iraq. The Al-Binaa Alliance, which is part of the PMU-affiliated Fatah coalition, expressed its objections to the bill July 30, calling it a clear intervention in Iraqi matters.

Some Iraqi politicians fear the US Treasury will sanction more prominent PMU leaders and PMU-affiliated figures. Also, a former Iraqi deputy prime minister, Baha al-Araji, said he thought the US House bill, if passed, would deter armed factions cooperating with Iran from taking actions against the United States.

PMU factions not close to Iran have been silent about the sanctions and other US actions against Iran-backed parties in Iraq.

All this shows that the pressure against Iran-backed parties in Iraq appears to be bearing some fruit. There is also growing fear that more severe actions against PMU leaders are coming at a time when the leaders are not receiving support from the Iraqi government or the general public. Whatever happens, Iran-backed forces will remain a crucial issue for the Iraqi government, whose officials likely will not be able to effectively deal with this matter without international support.