Several leaders in Iraq's Popular Mobilization Units have signaled that they are handing over control of their factions to the central government as they prepare to run in next year's elections, but some argue they will maintain their influence. 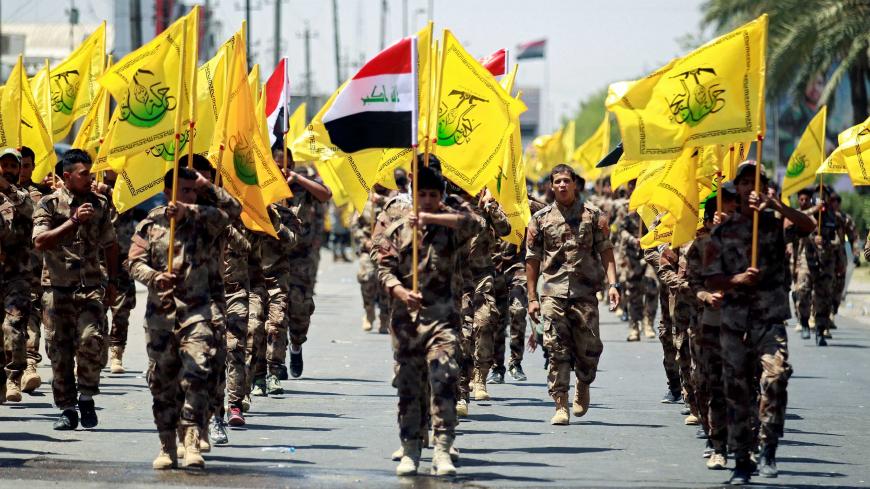 Iraqi Prime Minister Haider al-Abadi announced Dec. 15 that his government had begun implementing its policy to bring all weapons in the country under state control, following a statement by the premier days earlier declaring the "end of the war" against the Islamic State (IS).

Abadi's announcement came just hours after the speech that Abdul Mahdi al-Karbalai — spokesman of Iraq's Supreme Shiite leader Ali al-Sistani — gave on the same day, in which he called for the need to integrate "volunteers" — in reference to fighters of the Popular Mobilization Units (PMU) — “into the constitutional and legal framework that limits [the possession of] weapons to the state” so that the PMU fighters "are not exploited for political objectives.”

Abadi welcomed Sistani’s call to “not use PMU volunteers and fighters politically,” adding, “The government is working to organize the PMU in accordance with the state’s legal framework.”

PMU factions had already begun to disengage from their internal organization and hand over their fighters and weapons to the prime minister as commander in chief of the armed forces.

The leader of Asaib Ahl al-Haq, Sheikh Qais al-Khazali, said Dec. 13 that his forces were under the direct control of Abadi. Prior to that, Al-Abbas Combat Division had dissolved itself and handed over its fighters and weapons to the Iraqi government.

The Iran-backed Badr Organization, the largest PMU faction, followed suit, handing over its troops and weapons to the Iraqi government. Badr leader Hadi al-Amiri told his fighters Dec. 14 to “follow the orders of the commander of the armed forces and cut off all contacts with the group's political wing.”

Amiri also called on his fighters to withdraw from the cities under their control and asked other factions to do the same. “I also call upon all my brothers, the leaders of the different factions, to remove all signs of militarization from the cities,” he said, and indeed other PMU factions are expected to follow Amiri’s example.

This development raises several questions: Why are PMU factions putting their entire power under the control of the Iraqi government? Does this mean an end to illegal militias? Does this indicate the end of Iranian influence on some militias that declared allegiance to Iranian Supreme Leader Ayatollah Ali Khamenei?

It seems the opposite is true since the political wings of PMU factions are preparing to participate in upcoming elections expected in May. So the recent action of PMU leaders in handing over their militias to the Iraqi government seems a preparation for the election, while they will keep their influence among their militias even if they have formally come under control of the Iraqi government.

Hassan Salem, the head of the Sadikun parliamentary bloc, affiliated with Asaib Ahl al-Haq, said Dec. 6 that his bloc intends to join forces with a larger alliance that would also include the PMU-affiliated Mujahedeen bloc.

Some military commanders began to resign from the PMU in order to prepare for elections within the future alliance. The first was PMU spokesman Ahmed al-Asadi, who resigned Nov. 28, saying, “The PMU will remain an Iraqi security institution that has nothing to do with the elections, and those who want to run should first resign.”

Meanwhile, Iraqi Vice President and former Prime Minister Nouri al-Maliki said that it was his idea for the PMU to form a single list for the elections. He also noted that the State of Law Coalition, which he heads, will ally with the PMU bloc after the elections for the purpose of forming the largest bloc and thus lead the Iraqi government.

It has become very clear that Abadi and Sistani do not want the factions to maintain their independence but rather want to integrate them into the security system to avoid the possibility of their being exploited in future political projects. This has previously been confirmed by both Abadi and Sistani on several occasions, in addition to this being reiterated in the victory statement issued following the defeat of IS.

This raised concerns among PMU leaders about a confrontation with Abadi and Sistani, which could lead to the loss of their social balance and eliminate them from the political scene — especially since the PMU was originally founded based on a fatwa from Sistani.

Sistani said earlier this year that his aforementioned fatwa is still in force because “its objective is still valid.” This means he can invalidate this fatwa after IS is eliminated in Iraq, and thus the religious legitimacy of the PMU and all its factions will be nullified.

Abadi also succeeded last year in passing the PMU law, which clearly states that PMU forces must be fully subject to the Iraqi government and that PMU leaders and members should be prevented from participating in the elections.

The main PMU factions have indeed taken positive steps to comply with the Iraqi law, integrate their forces into the official security system and refrain from participating in the elections so long as they are still part of the PMU. Yet it is still challenging for Abadi to implement the plan for integrating these forces and turn their political loyalties into national ones. This would be the first and biggest challenge for Abadi in 2018 if he is to serve once again as prime minister of Iraq.