It shouldn't have come as a surprise when Iraqi Shiite cleric Muqtada al-Sadr called on Syrian President Bashar al-Assad to relinquish power, as other Shiite leaders have previously also criticized the Assad regime. 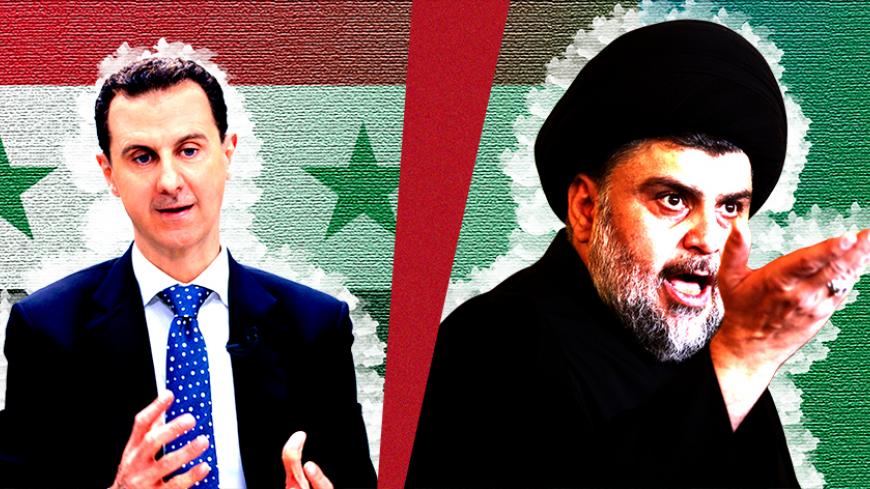 NAJAF, Iraq — When the rebellious Shiite cleric Muqtada al-Sadr called on the Syrian president to step down from power, many were taken by surprise. The prevailing belief is that Shiites all back the Syrian regime and support its rule, and that what is happening in Syria is a sectarian war between Shiites and Sunnis.

On April 8, Sadr called on Assad to relinquish power, saying, “It would be fair for President Bashar al-Assad to resign and step down in love for Syria, to spare it the woes of war and terrorism. The rule would thus be handed over to influential popular parties capable of taking a stand against terrorism and preserving Syria’s sovereignty as soon as possible. This would constitute a historic, heroic decision before it’s too late.”

After the popular uprising against Assad when it broke out in March 2011, Sadr expressed his support in a November statement. Despite accusations that the Sadrist Movement, which is highly influential among Iraqi Shiites, was taking part in the Syrian conflict, he has denied any involvement by members of his party. He has also voiced his disapproval of other Shiite militias going to Syria to fight for Assad.

Sadr has expelled a number of fighters from his armed factions for having fought in Syria. Most recently, Sa’ad Swar, a former leader in Jaish al-Mahdi, announced his defection and formed Jaish al-Mou’mal in 2016 to fight in Syria and Iraq. Iran has used the defections as leverage to persuade more members to leave the Sadrist Movement in an attempt to weaken the party, especially after Sadr had voiced opposition to Iran’s regional policy. Many factions have split from the Sadrist Movement, including Asaib Ahl al-Haq and the former Hezbollah al-Nujaba.

Many prominent Najaf clerics have never supported the Syrian regime, with some even forbidding their followers to fight in Syria. Four prominent Najaf clergymen — Ayatollah Ali al-Sistani, Sheikh Ishaq al-Fayyad, Seyed Mohammad Sa’id al-Hakim and Sheikh Bashir al-Najafi — were quoted by Asharq Alawsat as adopting a unified stance in 2013: “Individuals who go to Syria for jihad are disobeying the commands of religious authorities.” In Qom, no prominent clerics have issued fatwas in support of sending Shiite fighters to Syria.

With the Islamic State (IS) nearly defeated in Iraq, there are growing concerns that Shiite militias from the Popular Mobilization Units (PMU) might head to Syria to fight for the Syrian regime. These militias have not only been strengthened by their experience fighting IS, they now have a legal standing under the PMU law passed in November 2016. Shiite PMU factions have long voiced their readiness to take the fight to Syria as soon as possible. The factions calling for going to Syria are directly affiliated with Iran, as is the case with Kataib Hezbollah, Asaib Ahl al-Haq and Saraya al-Khorasani, who maintain a military presence in both Iraq and Syria. These factions constantly reiterate their intention to step up their presence in post-IS Syria. On March 8, Harakat al-Nujaba announced its plan to form a special military force in Syria.

In an attempt to curb these factions' defiance, Sistani published a fatwa with his affiliated Non News Agency April 9, stating, “We previously issued a fatwa deeming military duty a top priority in order to protect the Iraqi people, their land and holy places. The fatwa shall remain binding as long as its exigency continues, despite some of the advances made by our brave fighters in ousting the terrorists.”

The fatwa forbids the PMU from working outside the framework of the Iraqi government and acting outside of Iraq. The restrictions put Iran-affiliated factions in a difficult position, as they were looking forward to stepping up their presence in Syria independently of the Iraqi government. Recalling the backdrop against which the PMU was established — the fall of Mosul into IS' hands — Sistani is now pulling the rug of legitimacy from under the feet of Iran-affiliated factions.

Sistani has also denied meeting with a Houthi delegation in September 2016, meaning that he did not support Iran’s regional agenda. Prime Minister Haider al-Abadi canceled a conference backed by a number of Shiite parties for supporting the Houthis, originally slated for April 2.

Sistani and Sadr’s positions are intended to support Abadi in curbing Iran-affiliated factions and establishing stability in post-IS Iraq and protect it from regional tensions and the US-Iranian conflict.