No end to the militias in Iraq

Every once in a while a new militia emerges in Iraq, increasing the chance of instability in the country. 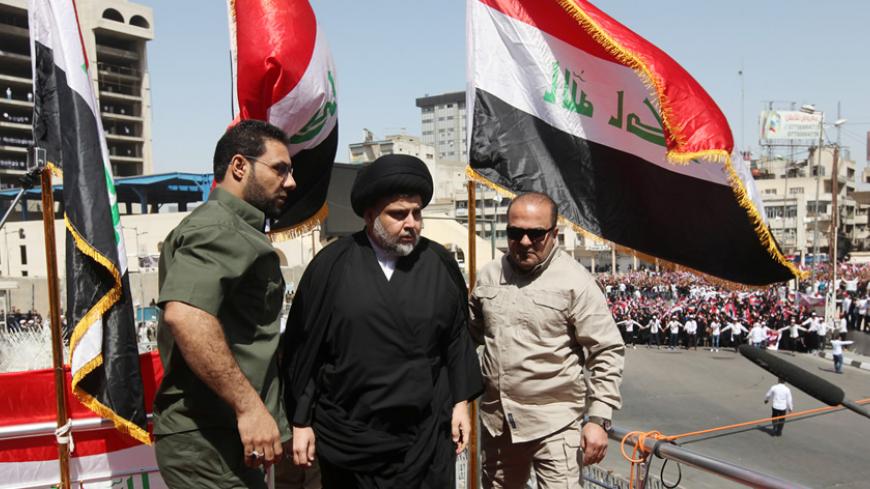 Baghdad — On July 31, violent clashes broke out between two factions of the Popular Mobilization Units (PMU) in al-Iskan, west of Baghdad, killing one and injuring 13 from both factions. The violence erupted after armed forces from a new militia called Jaish al-Mou’mal arrived in an area dominated by the Peace Brigades, which is affiliated with Shiite cleric Muqtada al-Sadr.

“I, Sa’ad Swar, have not defected. Like my reference and leader [Mohammad Sadeq al-Sadr, Muqtada al-Sadr's father], I was created to serve as a burning candle. So may the ignorant ones be quiet,” Swar wrote on his Facebook page June 12 after announcing the formation of Jaish al-Mou’mal in Iraq and Syria.

Jaish al-Mou’mal is the latest faction to split from the ranks of the Sadrist movement.

Quick overview of the defections

Jaish al-Mahdi is considered the breeding ground of most factions and Shiite militias in Iraq. The most prominent of these defections is the League of the Righteous, led by Qais al-Khazali, followed by Sheikh Akram al-Kaabi, who defected and formed Hezbollah al-Nujaba; Sheikh Jalal al-Shahmani, who formed Kataeb al-Tayar al-Risali; Sheikh Aws al-Khafaji, who formed the Brigade of Abu al-Fadl al-Abbas; and Sheikh Abdul Zahra al-Sueiadi, who established the Revolutionist Hussein formation.

These new groups have in common that they are affiliated with velayat-e faqih and former Iraqi Prime Minister Nouri al-Maliki; they all have a picture of Iran's Supreme Leader Ayatollah Ali Khamenei on their websites and these factions’ leaders often visit Maliki, who provides support.

This is particularly true if the faction opposes Iran’s influence in Iraq. Accordingly, the formation of Jaish al-Mou’mal occurred as a reaction to Sadr’s protest since last year against the Iranian-backed Iraqi government. In this context, defections come as an attempt to pressure Sadr into putting an end to his protest demanding reform and change.

Swar was a military leader in Jaish al-Mahdi, and like many leaders in this faction he was accused of carrying out sectarian operations. He was arrested and imprisoned by US forces for almost seven years before he had help breaking free in 2011 along with four other leaders from Jaish al-Mahdi. Swar then moved to Iran and Syria and when he came back in 2014, he was captured again but was able to escape to Syria.

While staying in Syria, Swar, along with other Sadrist leaders, formed the Brigade of Abu al-Fadl al-Abbas, the Rapid Reaction Force and al-Kafeel Brigades. Thus began the dispute between Sadr and Swar, as Sadr was against Iraqi Shiite militias being involved in the Syrian issue.

When the fight against the Islamic State began, Swar returned to Iraq and carried on with his duty as a military leader in the Peace Brigades, which is the new name for Jaish al-Mahdi. He fought alongside PMU factions in the battles to cleanse al-Karma, a town located between al-Shuala and Fallujah.

Reasons behind the defection

A leader from Jaish al-Mou’mal told Al-Monitor on condition of anonymity that Swar’s defection from the Sadrist movement came against the backdrop of promises to provide support and direct reinforcement to Swar by Maliki, made during meetings held in June and July. This information was reiterated by Sadrist leader Nasser Sueiadi, but Swar denied it, saying he met with Maliki to ask him to mediate to liberate a number of Sadrist supporters arrested after storming into the Green Zone.

A source close to Swar told Al-Monitor on condition of anonymity that the defection was for reasons related to Swar’s engagement in the Syrian issue and in managing the protests calling for reform. In addition, the source explained that Swar felt marginalized within the Sadrist movement and the Peace Brigades.

Sheikh Hussein al-Shabani, a prominent figure in the Sadrist movement, emphasized this when he addressed Swar, saying, “Everything you mentioned in your discourse in terms of suffering and being marginalized is not enough reason for your defection. You have quite the remarkable stances and your position in opposition to the defectors at first was brilliant.”

Meanwhile, Sadr lamented Swar’s defection, saying that he did not expect Swar to do so. Jaish al-Mou’mal’s headquarters are in al-Shuala north of Baghdad and its military camp is located in Sabaa al-Bour, also north of Baghdad.

This new group said it is fighting in both Iraq and Syria and is fully prepared to participate in fighting in Yemen and Bahrain as well. It has openly declared that it is part of velayat-e faqih in Iran and follows Khamenei.