From Qusair to Yabrud: Shiite foreign fighters in Syria

Foreign Shiite fighters are rallying to the defense of the Syrian government in the civil war, with implications for the future of Syria and the strategic balance in the Middle East. 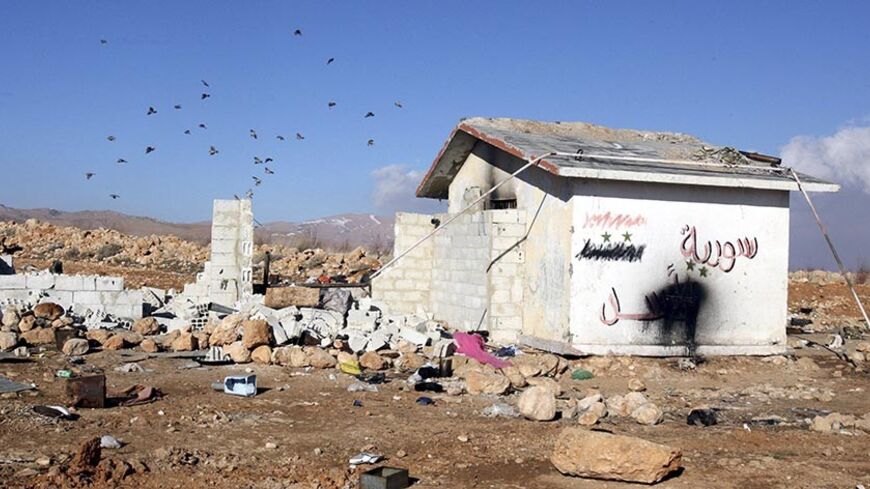 A view shows an empty Syrian army post at the outskirt of the Syrian village of Rankus, near the Lebanese-Syrian border, Jan. 3, 2013. Rebels controlled a line of border towns and villages stretching about 40 kilometers (25 miles) from Yabrud south to Rankus. - REUTERS
Dr. Saud Al Sarhan
March 6, 2014

RIYADH, Saudi Arabia — On Feb. 13, Ali Barakat uploaded a video to YouTube titled “Nasheed: Nasr bi-Yabrud,” or “Anthem: Victory in Yabrud.” Yabrud, a Syrian town about 80 kilometers (50 miles) north of Damascus, is the site of a battle between rebel groups and President Bashar al-Assad’s forces, who are supported by Shiite militant factions, including Hezbollah. The video shows footage of the conflict in Syria — advancing troops, firing tanks, a countryside in smoke — set to a pulsing pop song whose refrain promises, “I will decide your victory in Yabrud.” Barakat is a Lebanese singer and proud Hezbollah advocate. As of Feb. 18, the song has attracted more than 40,000 views and hundreds of comments pledging fealty to Hezbollah and wishing death upon its enemies.

This video — and thousands of other videos, photos, Facebook testimonials and websites like it — bear witness to a rapidly growing and little-understood phenomenon emerging in war-torn Syria. The Syrian revolution has ushered in the return of global Shiite jihad to the political arena, with an increasing number of Shiite militants arriving in Syria from around the world. Most of these fighters come from Iraq and Lebanon, with their numbers supplemented by recruits from Iran, Pakistan, Afghanistan, Yemen and some African countries. Scholars and journalists have not yet tackled the issue of Shiite militancy in depth. Most current research on the militants fighting in the Syrian revolution focuses on al-Qaeda and other non-Shiite organizations.

There are no reliable statistics available on the number of foreign Shiite fighters in Syria, but the latest estimates place their number between 10,000 and 15,000. Hezbollah fighters alone are estimated to be between 3,000 and 5,000, Iraqi fighters between 4,000 and 5,000 and Iranian Revolutionary Guard troops between 1,000 and 1,500. As of last month, between 300 and 400 Hezbollah fighters had been reported killed in Syria and around 2,000 injured. The battle of Yabrud is expected to increase these numbers significantly.

Observers of Iraqi Shiite militias in Syria have noticed the rise of an ideology linking current events in Syria to Shiite history and eschatology. The defense of the Shrine of Zeinab in Damascus, purported by Shiites to contain the tomb of first Shiite Imam Ali and his wife Fatimah’s daughter, has been invoked as a justification for war in the region. Many Shiite militias use slogans such as yali tharati al-hussein, or “revenge for Hussein,” and ya zaynab lan tusbay marratayn, or “O Zaynab, you will not be held captive twice,” evincing the belief that the current conflict is simultaneously a defense of Shiite sacred sites and an attempt at taking revenge on the Syrians for their role in the massacre at Karbala, which took place nearly 1,400 years ago. Nevertheless, this grafting of ancient grievances onto a contemporary conflict has its weak spots: Shiite militias may claim to act in defense of a single tomb in Damascus, but their wide-ranging and expanding military activities belie the sincerity of this goal.

The increased authority of Iran's supreme leader and the velayat-e faqih (guardianship of the jurist) among non-Iranian Shiites, as well as a related rise in the popularity of a particular strain of Shiite eschatology, help shed light on the motivations of Shiite fighters in Syria. Among militants faithful to the dictates of the Iranian clerics, there is the widespread belief that the conflict in Syria is an early sign of the appearance of Imam al-Mahdi — an ultimate savior of humankind and the last of the Twelve Imams who will emerge with Isa (Jesus Christ) — and that their duty is therefore to hasten his appearance by spreading more unrest, since al-Mahdi will only arrive in a world of chaos and disorder.

This belief is an interpretation of a Shiite doctrine that states that when the apocalypse is near, a figure called al-Sufyani will start a revolt in Syria and seek to exterminate the Shiites. He will be defeated by the supporters of Imam al-Mahdi, led by al-Khorasani and the commander of his armies, Shu‘aib bin Saleh. Once victorious, Khorasani and Shu‘aib bin Saleh will hand over the flag of victory to al-Mahdi. Contemporary Shiite fighters believe that the rebels in Syria are the manifestation of al-Sufyani and that the velayat-e faqih is, in fact, al-Khorasani (Khorasan is in present-day Iran). Shu‘aib bin Saleh is identified variously as the commander of the Iranian Revolutionary Guard or as Hassan Nasrallah, the current leader of Hezbollah. These beliefs have found their way into the core identities of some militias. For example, the Taliat al-Khorasani Brigade’s name translates into “the vanguard of the Khorasani.”

Many researchers have noticed the spread of this type of apocalyptic ideology in Iraq in particular. After the US invasion in 2003, Iraq’s religious and intellectual scene was thrown off balance. Iran’s growing influence, the dramatic decline of the role of traditional Shiite clergy — the marja‘iya — in Najaf, increased acceptance of the idea of the velayat-e faqih and many Iraqi Shiites’ dependency on the Iranian marja‘iya all revolutionized the country’s ideological landscape. The four Shiite marja‘iya in Najaf (Ayatollahs Ali al-Sistani, Muhammad Said al-Hakim, Bashir al-Najafi and Ishaq al-Fayad), in addition to Muqtada al-Sadr, oppose sending Iraqis to fight alongside the Syrian regime. However, calls from the Najaf leadership were not effective in stopping some young Iraqi Shiites from fighting in Syria. Instead, these fighters followed the fatwas of the Iranian velayat-e faqih, Supreme Leader Ayatollah Ali Khameini, as well the Iraqi marja‘iya Kazim al-Haeri, which explains why the images these fighters and their brigades use on websites and publications are usually of Khamenei and Mohammad Mohammad Sadeq al-Sadr, and not of the Najaf marja‘iya.

Contrary to this religious fervor for sending fighters to Syria, the Iraqi government has announced its neutrality with regard to the conflict. Nevertheless, it provides constant unofficial support to both Assad and the Iranian regime. Iraqi Prime Minister Nouri al-Maliki allowed Iranian aircraft to use Iraqi airspace to transport arms and troops as well as supplies to the Syrian regime. There is an abundance of evidence that members of Maliki’s regime actively support Shiite militants. Video clips uploaded to websites affiliated with the militia fighters in Iraq show Maliki government officials participating in the funerals of some pro-Assad militants killed in Syria. Iraqi Transport Minister Hadi al-Ameri (who belongs to the Badr Corps) and Ammar al-Hakim (leader of the Supreme Islamic Iraqi Council), both from the ruling Shiite Alliance and close to Iran's Revolutionary Guard, facilitated the transportation of fighters and weapons from Iran and Iraq into Syria. They also protected Iranian aircraft and tankers from inspection while on Iraqi territory. Further, the Talia Islamic Party, which belongs to the ruling coalition, officially announced on its website its involvement in the fighting in Syria.

The phenomenon of global Shiite militias and its impact on the security of the region are worthy of further study. After the conflict in Syria ends, militias mobilized for combat and loyal to the velayat-e faqih will remain, and the great question facing the region will be what Iran chooses to do with its newfound resources and influence. It would behoove those interested in stability in the region to begin analyzing what exactly those are likely to be.