Hezbollah's relationship with Iran is not dependent on the Iranian presidency or government, but rather insitutions connected with the office of Iran's supreme leader and the velayati-e faqih. 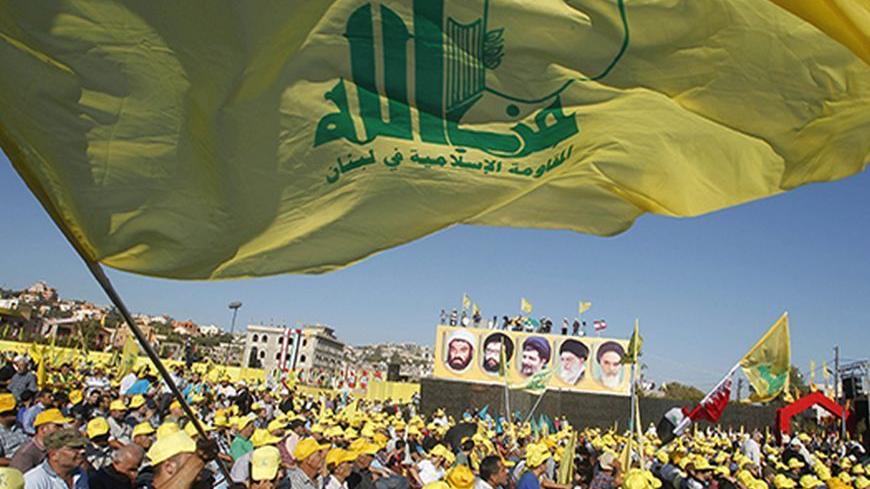 Supporters of Lebanon's Hezbollah leader Hassan Nasrallah wave Hezbollah flags as they listen to him via a screen during a rally on the seventh anniversary of the end of Hezbollah's 2006 war with Israel, in a village in southern Lebanon, Aug. 16, 2013. - REUTERS/Ali Hashisho

A correspondent in Beirut
October 3, 2013

Hezbollah leaders are convinced that no matter who the president of the Islamic Republic of Iran is, it will not change Tehran’s position in principle vis-à-vis the party. Moreover, their analysis rejects all speculation that a reformist president in Tehran will lead to less support for Hezbollah. They seem to believe that Tehran’s decision regarding its relationship with Hezbollah is controlled by two stable institutions whose power within Iran's governing system does not change regardless of who becomes president. The first institution is represented by the supreme leader of the Islamic revolution, Ayatollah Ali Khamenei, backed by the Iranian Revolutionary Guard Corps (IRGC), and the second is the hub of ayatollahs in Qom that has tremendous doctrinal and moral influence in Iran.

Hezbollah does not receive financial support from the Iranian state, but from khums funds. Khums is the Shiite religious obligation of the rich to contribute one-fifth of their income to their religious reference. Qom and Khamenei receive such alms from Shiites around the world. The revenue from khums is estimated to be in the millions of dollars annually. The ayatollahs and IRGC, not the Iranian state, have authority over this money and decide how to distribute it.

An examination of the details governing Hezbollah’s relationship with Iran reveals connections to the religious and ideological power structures in Iran rather than official government institutions. The IRGC is the organized power of the revolution, and its stature is equivalent to official political and military structures. Over time, it became the first defense committee in Iran and the country’s military arm, carrying out the decisions of the supreme leader locally and abroad. The IRGC has major military wings outside Iran. Hezbollah is considered one of them, although it has some independence at the level of its military structure and breadth of maneuvers in Lebanon.

A high-level leadership arrangement for Hezbollah was created to liaise with the Supreme Command of the IRGC. It is said to consist of a jihadist council of seven members led by Secretary-General Hassan Nasrallah and representatives of military and security agencies, in addition to an Iranian appointed by Tehran to oversee the permanent coordination mission.

The most effective officer at the field level in the IRGC is Gen. Qasem Soleimani, the official commissioned by the supreme leader and the command of the IRGC to manage Iran’s direct and indirect military wings in Iraq and Syria (i.e., the forces of Iraqi Hezbollah and Lebanese Hezbollah in addition to a large contingent of conventional army forces, totaling some 200,000 men according to information from certain sources), Lebanon (through Hezbollah and the Resistance Brigades), Yemen (through the Houthis) and Sudan and Gaza (through Islamic Jihad).

In any case, Hezbollah is an integral part of the IRGC and ideological powers in Iran. Thus, Hezbollah's relationship with Tehran goes beyond mere politics, but has doctrinal significance as well. On Iran's political map, the party is aligned with the supreme leader's stance vis-à-vis reformists. It should be noted, however, that the internal conflict in Iran is not, to a large extent, between the supporters and opponents of the Islamic revolution. Rather, it is between two schools of thought within the Islamic revolution.

One school prefers extremism, while the other preaches moderation. Regardless, both sides believe in the concept of the velayat-e faqih, guardianship of the jurist, or at least the reformist wing has not raised the banner for toppling or challenging it. During certain periods, trends within Hezbollah have mirrored those of Iran's internal political scene. During the tenure of the reformist Iranian president Mohammad Khatami, a trend supporting him emerged in Hezbollah. Thus, the party’s command expelled some members to punish them for their support of Khatami, of particular note, Nayef Karim, who had been Hezbollah’s media officer for a while. Of more importance, within pro-Iran Lebanese Shiite circles, there was Sheikh Mohammad Hussein Fadlallah, who years before his death, in 2010, had admonished, “Do not link Lebanon’s Shiites to the velayat-e faqih in Tehran.”

Many Hezbollah members are considered Fadlallah’s muqallidin, from the root taqlid, which means "to follow" or "to imitate." In other words, they adhere to the fatwas issued by Fadlallah on how to carry out daily religious duties. Fadlallah lived during the time of Imam Ruhollah Khomeini, when Hezbollah first emerged. He was viewed as the last spiritual guide of the party. Fadlallah did not oppose the principle of velayat-e faqih, but he opposed the concept of one wali al-faqih, guardian of the jurists, for the entire Shiite world.

Fadlallah thought that Khomeini was regarded as the sole religious reference to all Shiite Muslims worldwide because Khomeini was exceptional as an imam. After Khomeini’s death, however, Iran had to take into account the particularities of Shiite communities around the world, as their circumstances and the nature of their problems differed from country to country. Thus, every country needed its own Shiite religious authority.

The Iranian supreme leader, Khamanei, opposed this concept and was backed by Hezbollah in this regard. The party therefore launched a campaign against Fadlallah. It warned its members about his muqallidin and ordered them to stop following him. They were to follow the wali al-faqih, Ayatollah Khamenei. Fadlallah was thus forced to abandon his position in order to restore the relationship with Tehran and Hezbollah.

During Mahmoud Ahmadinejad's presidency in Iran, there was some divergence between Ahmadinejad and Khamenei. Hezbollah, as usual, was in the thick of it, siding with the supreme leader against Ahmadinejad. The difference then was between two theories. While Ahmadinejad advocated hujjat al-Islam (proof of Islam), Khamenei stressed the concept of the guardianship, that is, the supreme leader as religious authority.

Hujjat al-Islam is based on the idea that the true wali al-faqih is the awaited Imam — al-Mahdi, whom Shiites believe will bring them justice and salvation. Khamenei, on the other hand, is seen merely as a revered religious reference, but is not the Imam, as this title is reserved for al-Mahdi. Advocates of the guardianship theory, on the other hand, strongly believe that the supreme leader is the representative of the Hidden Imam, al-Mahdi. Although Ahmadinejad managed to drum up support for his theory, especially from large segments of the poor rural areas of Iran, Khamenei clipped his wings and managed to remove him from power without a trace of his influence remaining within the state.

In light of the foregoing, there have been significant differences in interpreting the concept of the velayat-e faqih in Iranian centers of power. Hezbollah is at the core of these differences, as it is among the most prominent supporters of the velayat-e faqih, guided by the person of the supreme leader, who is protected by the most powerful institution in Iran, the IRGC.

In short, Hezbollah’s presence in Iran is not dependent on the political power structure, but on being part of the nation’s religious establishment. The party is also deeply involved in defending the supreme leader's line against other currents in the Islamic community based on the theory of velayat-e faqih.

Those well informed about the internal political situation in Iran affirm that Hezbollah, for a number of reasons, is not concerned about the ascendance of Rouhani to power as a moderate and reformist president.

Second, both Hezbollah and Rouhani answer to the highest authority in Iran, the supreme leader. Indeed, whether Rouhani will be able to fulfill his visions and get his policies through Iran's decision-making apparatus depends on the supreme leader.

Third, it's apparent that Hezbollah is seen as the most successful strategic investment for Iran outside its borders, compared to all other such models Tehran has established. Hezbollah has defended Iran's security in the Arab-Israeli conflict and secured its position on the shores of the Mediterranean and within the Levant.

At times, Al-Monitor withholds the bylines of our correspondents for the protection of our authors or their sources. Different authors may have written the individual stories identified on this page.