Iran on Quest to Legitimize Velayat-e Faqih in Iraqi Seminaries

Iran has always tried to secure religious legitimacy for its velayat-e faqih doctrine by supporting loyalists in the Qom and Najaf Shiite seminaries. 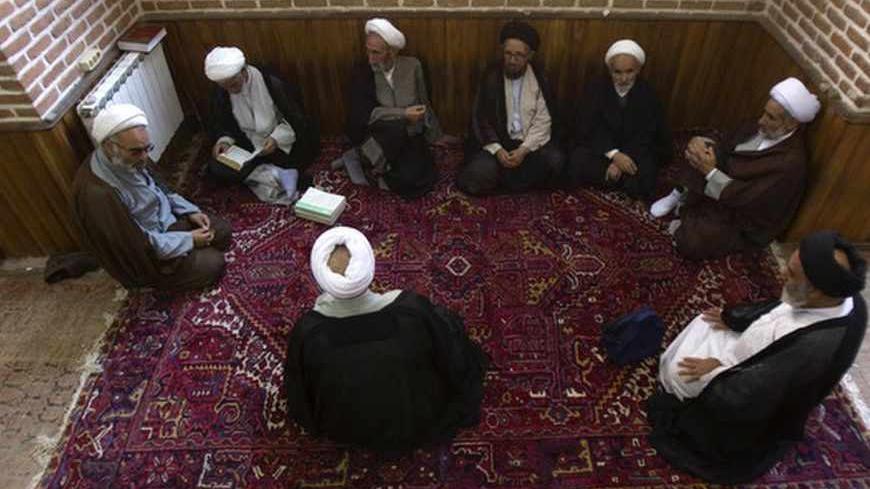 Since its establishment, the religious regime in Iran has never been able to establish a stable and harmonious relationship between the Shiite seminaries of Qom and Najaf. There is an Iranian concern which surfaces from time to time about the Najaf seminary maintaining its traditional position on velayat-e faqih, which is considered a new opinion in Shiite doctrine. That doctrine was set by the founder of the Iranian revolution, Ayatollah Khomeini, to give his absolute rule a religious basis.

Most of the spiritual references in Qom also do not believe in velayat-e faqih, which makes the Iranian regime apprehensive about the Qom seminary. The two sides also disagree about the methods of governance. The regime's response was to place a number of Qom spiritual references under house arrest and bar them from expressing their views and ideas or continuing their teaching and religious duties.

Since its establishment, the Iranian regime has denied the centrality of Najaf in Shiite jurisprudence and considered it to represent a retrograde form of Islam that is non-revolutionary and accommodating. The reasons for this go back to the conflict between Khomeini’s revolutionary approach and the Najafi view, which separates religion and politics. That attitude reached its peak after the death of Sistani’s mentor Sayyid Abu al-Qasim al-Khoei. At the time, Ahmad Jannati, the Friday prayer leader in Tehran, effectively accused Sistani of being accommodating and a traitor by describing him as the “English” reference. Jannati also warned of spiritual references leaving Iran and the danger that this exit will represent to the Islamic regime.

In the second phase, after Sistani was able to widely establish his authority in the entire Shiite world, including Iran and Qom, the regime opted to deal with the phenomenon in a positive way and to embrace the representatives of Najaf in Qom, including the official representative of Sistani, Sayyid Jawad al-Shahristani, who has impressed Qom with his scientific and research institutions, publishing houses and other seminary events and activities. But this all happened when Najaf was at its weakest, as it lived in Iraq under the oppressive authority of Saddam Hussein’s regime. That explains why there was no conflict between Najaf and the regime at the time.

The rise of Najaf’s role in Iraq and the Shiite world after Hussein’s fall in 2003 opened the door for the emergence of differences between the Iranian regime and Najaf’s official opinion. Signs of conflict appeared when the sides took opposite stands regarding the Shiite militias in Iraq. Iran supported those militias, while Najaf criticized the phenomenon and considered it completely illegitimate.

With the worsening sectarian crisis in the region and the emergence of a sectarian conflict in Syria, the regime expected Najaf to support the Shiite position in the conflict as represented by Iran and its ally Hezbollah in Lebanon, or at least remain silent on the matter. But Najaf’s explicit position against waging jihad in Syria and the illegitimacy of the religious edicts calling for participation in the sectarian fighting there have placed Iran in a very awkward position.

It seems that the regime is now trying to penetrate the Najaf seminary by supporting in Najaf a number of figures loyal to the regime and produce a religious authority in Najaf that is loyal to Iran. That’s why Iran permitted Sayyid Kamal al-Haidari to openly criticize the Najaf spiritual references on Al-Kawthar TV, a Tehran-based Arabic-language channel that belongs to the regime. Iran permitted Haidari to propose himself as an alternative to the existing Najaf spiritual references, whom Haidari considers “mentally disabled” and “without social awareness.” The regime has previously done the same with Qom by supporting figures loyal to itself. Those figures used to obey its political demands in the seminary, thus grating the regime religious legitimacy.

The conflict between the Iranian regime, which believes in velayat-e faqih, and Najaf, which rejects that notion, has made some researchers in Shiite affairs predict the end of the traditional Shiite reference with Sistani’s death. But this seems unrealistic because of the coherent social structure in the Najaf seminary and its general position in the Shiite world.