Students at Qom seminary are leaving for Najaf

Due to political intervention and lack of freedom in the religious seminary, hundreds of Shiite clerics are migrating from Qom seminary to Najaf seminary for its traditional activities. 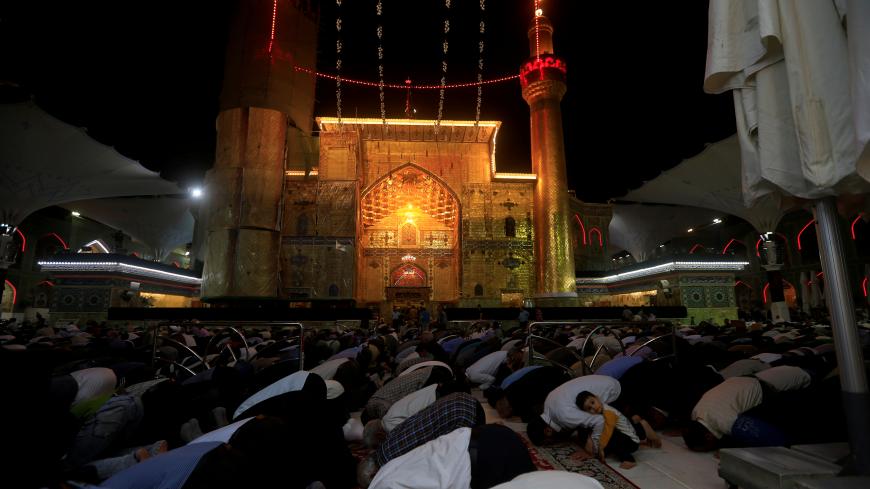 In surprising news, the local Iranian press reported Sept. 25 that Ali Khomeini, a grandson of revolutionary leader and Islamic Republic of Iran founder Ayatollah Ruhollah Khomeini, had transferred from Qom seminary in Iran to the Najaf seminary in Iraq.

The news had ripple effects in both Qom and Najaf seminaries. Questions were raised about the reasons for the transfer — especially by the grandson of Ayatollah Khomeini, who was a prominent lecturer at Qom.

It should be noted that it was from Qom that Ayatollah Khomeini launched his revolution against the shah.

Why would Ayatollah Khomeini’s grandson leave Qom for another religious institution known for having a different jurisprudential, political and social vision?

Al-Monitor visited Ali's residence in Najaf, which is where his grandfather lived when he was exiled by the shah's regime in Iran. Ayatollah Khomeini lived in Najaf for nearly 15 years, where he focused on religious and political activities, taught and wrote religious books, and led the Islamic revolution in Iran.

With official support from the Iranian government, the Tehran-based Institute for Compilation and Publication of Imam Khomeini’s Works recently renovated Ali's house in Najaf. He is expected to start his teaching activities in Arabic from his new residence, which carries great symbolic connotation to Ayatollah Khomeini.

Ali, 33, is a prominent Khomeini figure. He is the son of Ahmad Khomeini, who was the right-hand man to his father, Ayatollah Khomeini, during the 1979 Iranian Revolution. Ahmed died in mysterious circumstances in 1995. Some accused influential parties in the Iranian regime of assassinating him for criticizing the Iranian regime after the death of his father.

Ali also has family ties with Grand Ayatollah Ali Sistani, the leading religious authority of the Najaf seminary. Ali is married to the daughter of Ayatollah Javad Shahrestani, the son-in-law and representative of Ayatollah Sistani.

Family ties play a significant role in the religious ruling system in Shiite institutions. Therefore, the relocation to Najaf of Khomeini's grandson, who is affiliated with the Reformist camp in Iran, would bridge ties between this camp and the Najaf school.

The Reformist camp calls for reducing and limiting the role of the guardianship of the jurist, a doctrine known in Iran as "velayat-e faqih." The Najaf school also opposes the application of this doctrine and calls for a secular regime in Iraq.

Reformists in Iran welcomed Ayatollah Sistani’s leadership in Iraq after 2003 and his political approach calling for a secular regime instead of religious rule. Reformists saw this as a source of inspiration for changing Iran's religious regime. “The rulings of Ayatollah Sistani are well understood by the Reformists in Iran,” Masoumeh Ebtekar, the vice president of Iran for Women and Family Affairs, told the journal New Perspectives Quarterly back in 2005 shortly after Shiites in Iraq regained power. Ebtekar added, “There is a lot of debate on his thought, especially the way he is promoting tolerance.”

In order to keep himself and his family away from possible negative political repercussions, Ali refrained from making any statement to the media about his transfer to Najaf. But his teacher, Mohammad Reza Naini, revealed in a statement the reasons behind Khomeini’s move to Najaf. “Najaf offers [broader] teaching potential than Qom, especially for those who seek knowledge.”

Ali's move from Qom to Najaf comes as part of a pattern that began with the fall of the Iraqi former regime. Large numbers of religious students in the Iranian city of Qom want to move to Najaf for various reasons, mainly the prestigious historical role and status of Najaf and its deep-rooted symbolism.

Others invoke political harassment in Qom that is practiced by lobbyists affiliated with the Iranian political regime. These lobbyists clamped down on a number of religious authorities — including Ayatollah Hussein-Ali Montazeri, a pupil of Ayatollah Khomeini. They closed some of their offices and disrupted their lessons.

Al-Monitor discovered that 400 students have transferred from Qom to Najaf so far, 100 of them in the past year alone. This indicates that transfer is constantly on the rise.

Al-Monitor met with some students from Qom seminary who transferred to Najaf and asked them about their reasons for relocating, given the better financial and public services situation in Qom.

Saeid (a pseudonym) said, “I have more freedom in my educational activities in Najaf. Nobody forces me to adopt a specific political opinion, and teachers do not politically harass me if I take part in a studying session. I attended the classes of Ayatollah Yousef Saanei, whose office was shut down by conservative paramilitary groups at Qom seminary in the wake of [former] President [Mahmoud] Ahmadinejad's election for a second presidential term in Iran. The Society of Seminary Teachers of Qom affiliated with the rule in Iran issued a fatwa that Saanei was unfit for religious leadership, and he was banned from religious and educational activities in the seminary.”

All aforementioned indications show that the political intervention in the Qom religious seminary, which was known throughout history for its independence from the Iranian regime, could expand the religious and social influence of Najaf at the expense of Qom, which conversely had flourished during the former Iraqi regime’s suppression on the Najaf seminary.