Competition Heats Up Between Qom, Najaf

The long-standing competition for influence between Shiites' two holiest cities is growing. 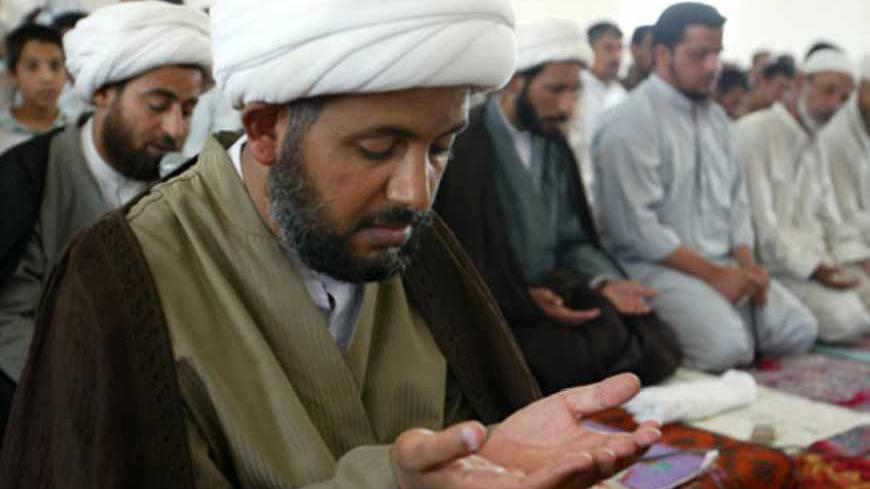 Iraqi Shiite hawza cleric Sheikh Jassim al-Saidi prays in a Baghdad mosque, June 3, 2003, after being released from detention by US forces. Saidi said that he had been accused of instigating violence toward US forces occupying Iraq. - REUTERS/Faleh Kheiber

Never before had a Shiite hawza (seminary) enjoyed a central position for the entire sect, drawing attention from Shiite communities from the farthest corners of the world and producing official Shiite thought for centuries — until Najaf took center stage three centuries ago. Najaf was like a Vatican for the Shiites, issuing fateful decisions for the sect and turning other religious schools into extensions of itself, led by scholars educated in Najaf. It turned into a formal institution with wide-ranging branches and connections managing religious affairs and a large part of social and political affairs in the Shiite world. This was all before the sun set on Najaf's biggest names as a result of political pressure exerted by Saddam Hussein's regime. This coincided with the victory of the religious revolution in Iran, prompting much of the human and symbolic capital from the Shiite sect to move to Qom, which had been a mere preparatory branch for students of religious studies to later move on to Najaf.

The first signs of conflict between the two schools had emerged before then, when Ayatollah Ruhollah Khomeini moved to Najaf in 1965 after being exiled from Iran as a result of the first flare-up of the revolution in the middle of the last century. In the first meeting between Khomeini and Sayyad Mohsen al-Hakim, who was the exclusive marja (source of emulation) for Shiites at the time. Hakim described Khomeini's style as reckless, to which the latter responded by describing Hakim's social and political behavior as negligent. Khomeini was not the source of considerable attention as the signs of conflict between his revolutionary followers and the traditional Najaf trend — led by Sayyad Abu al-Qassim al-Khoei after the death of Hakim — began to gradually emerge.

The dispute continued even more intensely in Qom after the victory of the revolution and the migration of a large number of Najaf scholars to Qom once they were banned from Iraq or fled as a result of political pressure. There, they were regarded by official political discourse as narrow-minded and backward-thinking, and lacking political and social vision. Khomeini ridiculed them in his many speeches to hawza scholars, using demeaning names such as American Islam, preachers of sultans, hypocrite clerics, thoughtless and stupid conspirator scholars and snakes in the hawza, among other labels that demonstrated the intensity of the conflict between political and conservative Islam as represented by Qom and Najaf.

Iran's insistence that the marja, or top religious leader, be appointed from among Qom natives after Khomeini's death can be seen as a sort of clinging to the gains Qom made in its competition with Najaf. It also stems from fears that it would lose these gains due to the presence of an influential class of Shiite scholars from Najaf — among Khoei's generation and his students. Accordingly, the great Friday preacher from Tehran, Sheikh Ahmad Jannati, warned after Khoei's death of what he called the exit of religious leadership from Iran, pointing to Sistani, who succeeded his teacher, Khoei, after Khoei’s 1992 death.

The conflict had eased up because of the disposition of Jawad al-Shahrestani,  supervisor of Sistani's office in Qom. He spent huge amounts of money supporting the Qom hawza and helping establish large global and regional institutions. Despite this, before the fall of Saddam the Iranian government still viewed many from Najaf with suspicion. An example of this was the arrest in Qom of Jaafar al-Sadr, the son of revered Grand Ayatollah Mohammed Baqir al-Sadr (executed by Saddam in 1980), after Jaafar al-Sadr arrived from Iraq as a representative of his relative Grand Ayatollah Mohammed Mohammed Sadiq al-Sadr because of the Iranian regime's fears of the latter and because of his being accused of cooperating with Saddam's regime. This ultimately led to Jaafar Sadr being outright banned from political work and to the closure of Sadr's office in Qom. (Mohammed Mohammed Sadiq al-Sadr was assassinated in Najaf in 1999; radical cleric Muqtada al-Sadr is his son.)
After the fall of Saddam, Iran began worrying more about Qom losing influence to Najaf. Iran began to spend vast sums of money in Najaf and sent a number of representatives from the Qom hawza to Najaf to exert influence in its conservative social and intellectual environment and to establish a new generation of scholars in accordance with Qom's political vision loyal to the Velayet-e faqih. Khamenei opened an official bureau in Najaf near Sistani's house, inciting the latter's ire. This caused Khamenei to move the office’s location and minimize the amount of activity taking place in the office. There were also attempts made by Iran to plan for there to be a post-Sistani top religious leader with the support of figures loyal to it such as Mahmoud Hashemi Shahroudi, former head of the Iranian judiciary. In the same context, Najaf religious leaders had received threats from Nouri al-Maliki, the Iraqi prime minister, regarding the latter's support for them to become the top Najaf religious leader if they were to continue criticizing Maliki.

The conservative center in Najaf feels that graduates from Qom are too concerned with worldly matters and political aspirations and that they are less doctrinal and religious than their peers in Najaf. On the other hand, the increasing demand by Najaf scholars of Arab origin on following their own religious leaders and moving up in the hawza's ranks is seen as a kind of competition with the Iranian nationalism that has been dominant.

The aforementioned factors are expected to lead to a greater division between Qom and Najaf, ending in the establishment of two independent Shiite poles charged with establishing two completely different readings of Shiism in the not too distant future. Political and social factors will play a critical role in this.