While Shiite clergy in Iran and Iraq mostly prefer to stay out of issuing fatwas, a minority is calling for jihad in Syria against salafist groups. 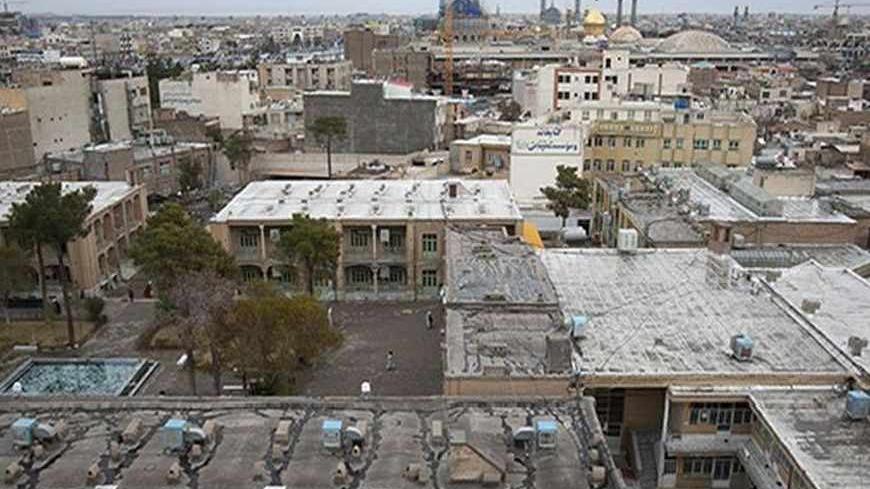 A view of Hojjatieh seminary (bottom) and the holy shrine of Hazrat Ma'soumeh (top) in the holy city of Qom on March 9, 2011. - REUTERS/Morteza Nikoubazl

The atmosphere of religious conflict in the region has created a hot market for jihad fatwas by religious institutions. Previously, a number of fatwas had been issued by several Sunni clergymen authorizing the act of traveling to Syria for the purpose of participating in jihad against the regime of President Bashar al-Assad. Presently, in response to the intensification of religious conflict in Syria, a fatwa has been issued by a clergyman from Qom, Iran that implicitly authorizes and legitimizes travel to Syria to take part in jihad against Salafist groups.

This fatwa has been published on the official Facebook page of Ayatollah Seyed Kazem Haeri in the form of a response to a request for permission to travel to Syria for the purpose of defending the burial site of Zainab, the daughter of the third Shiite Imam, without parental permission. Haeri found this action permissible and stated that parental permission for such matters is unnecessary. Previously, Ayatollah Seyed Mohammad Sadegh Rouhani, a prominent clergyman from the Qom seminary, had also legitimized jihad in Syria for the purpose of protecting Shiite holy sites. He labeled individuals killed for this deed as martyrs. These fatwas have led to the opening of official registration sites in Iran for the purpose of traveling to participate in jihad in Syria.

The publication of this fatwa has triggered instense opposition and displeasure among the high-ranking ayatollahs in the Qom and Najaf seminaries. These officials have found the fatwa to be based on illegitimate and unacceptable views. Asharq Alawsat reported on Ayatollah Ali Sistani’s view on forbidding travel to Syria for jihad and quoted from the four most prominent marjas (sources of emulation) in Najaf, saying, “Individuals who go to Syria for jihad are disobeying the commands of religious authorities.”

In an interview with Al-Monitor, Seyed Javad Al-Khoei, one of the instructors of the Najaf seminary, confirmed the legitimacy of the news published in Asharq Alawsat. He added that the Najaf seminary has always prohibited the interference of religious matters in political conflicts and none of the prominent Najaf clergymen agree with the involvement of Shiites in the religious conflict in Syria.

Similarly, no fatwa has been issued by prominent marjas of the Qom seminary regarding this issue as of yet. Rouhani and Haeri are considered second-degree marjas and possess less credibility and popularity than other religious leaders. The most significant point is that despite the fact that these two individuals belong to a school of thought supporting political Islam, they each hold a different position regarding the politics and structure of the Islamic Republic. Rouhani is a reputable revolutionary cleric in Iran who was subject to sequestration and house arrest after the victory of the revolution. His arrest was due to his dissimilar views from those of Ayatollah Ruhollah Khomeini and a number of other leaders of the revolution, and specifically because of his disagreement with the selection of Ayatollah Hossein Ali Montazeri as the successor to Khomeini. As a result of his contact with forces associated with Hezbollah, Rouhani has once again become politically active regarding the region's religious conflicts.

Haeri is also considered a revolutionary cleric and an advocate of the concept of Velayat-e Faqih (guardianship of the jurisprudence) and the Islamic Republic. Haeri has maintained good relations with the Islamic Republic and is considered a fervent defender of Ayatollah Ali Khamenei, as he considers Khamenei’s views above all other religious authorities.

During an interview with Al-Monitor, an instructor at the Qom seminary characterized the fatwas in support of jihad in Syria as a minority view, and considers them against the views of the reputable religious marjas of Qom. He added that these fatwas are not based on strong religious grounds and more so formed by an incorrect understanding of current regional events.

In his response to a question about Haeri’s relationship with the Iranian regime, he referred to Haeri as the chosen face of the Islamic Republic in Iraq, who is used to promote the radical views of the Islamic Republic among the Shiites in the country. Furthermore, the instructor mentioned numerous meetings that have taken place between Haeri and Qais Al-Khazali, the spiritual leader of Asa'ib Ahl al-Haq, a radical movement in Iraq.

He added that, after Muqtada al-Sadr distanced himself from the Islamic Republic, his relationship with Haeri also weakened. As a result, Haeri reclaimed all of his religious and political mandates granted to Sadr.

Even in Iraq, Haeri possesses an undesirable image and a weak standing among the population due to his reputation for radical and violent fatwas. Previously, Haeri published a book entitled Dalil Al Mujahid, which contained fatwas regarding matters of warfare, especially pertaining to irregular and guerilla warfare. A large portion of these fatwas, such as killing prisoners of war or innocent individuals if necessary, are against international human rights conventions and have been considered crimes of war.

An increasing number of war fatwas in support of jihad — from Sunnis and Shiites — have resulted in an increased number of casualties in the region. Such an environment has created a challenge for moderate groups, making it difficult for them to overcome the religious conflict. However, the decision by religious authorities to criticize such fatwas and declare them as erroneous will facilitate the creation of a peaceful and nonviolent environment.