Because of their histories and approach toward politics, Qom and Najaf seminaries have different approaches toward tolerance of other religions and interpretations. 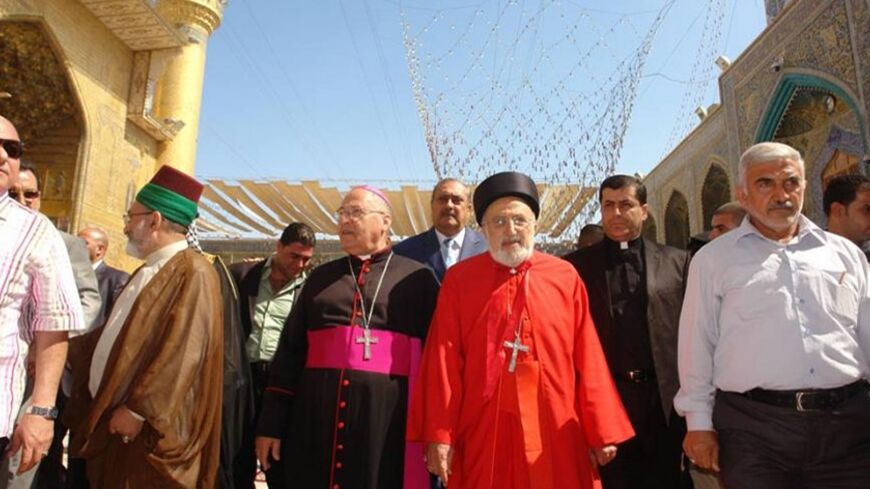 Mar Emmanuel III Delly (L), the Iraqi Cardinal and the Patriarch Emeritus of Babylon of the Chaldeans and former Primate of the Chaldean Catholic Church visit the holy shrine of Imam Ali before meeting Ayatollah Sistani and visiting the Shiite seminary, Najaf. Jul. 4, 2011. - Ali Mamouri

We have different images of tolerance and intolerance in the two major Shiite hawzas of Qom and Najaf. The level of tolerance in these hawzas is dependent on three important elements: the social environment of the hawza, the structure of the political establishment in charge of the country and the attitude of the influential Marjas (religious authority) in each era of their existence.

When comparing the two hawzas of Najaf and Qom, we see that the social environment plays a very important role in the way each views other religions. The current hawza of Qom, since its foundation by Sheikh Abdolkarim Haeri Yazdi (1859-1937) has been situated in a close Shiite environment where neither the teachers nor the students have any direct relations with followers of other religions. Even slightly different Shiite doctrines were not welcomed in Qom and have been heavily suppressed. We have numerous examples of these types of suppressions in the recent history of the hawza of Qom. Abul Fazl Borqei (1908-1993), one of the most famous jurists in Qom who was critical of certain Shiite beliefs, was repeatedly harassed and eventually had to leave Qom.

On 24 Bahman 1384 (Feb. 13, 2006) with the insinuation of certain jurists in the hawza and after the gathering of some of the plebeians, the religious center (Hussainia) belonging to the dervishes in Qom was destroyed over the course of a single night, and all its active members were arrested. This is while the differences between their doctrines and the main Shiite beliefs are quite minute and some of their leaders have even had good relations with Imam Ruhollah Khomeini.

In spite of all these, under the leadership of Ayatollah Hossein Borujerdi, Qom was one of the most important centers encouraging closer ties between different sects of Islam. In addition, some of Borujerdi's famous students such as Hussein-Ali Montazeri, Nematollah Salehi Najafabadi and Ali Panah Eshtehardi were important figures advocating a more tolerant view of Sunnism among the Shiites. All of them, however, were harshly criticized and removed from the mainstream hawza.

Currently, the idea of closeness between different sects of Islam and even the idea of dialogue among different religions is quite popular in Qom. However, this tolerance is usually only reserved for the outside world. When it comes to the internal environment of the hawza in Qom, or generally inside the borders of Iran, the outlook is much more limited and narrow. For example, the attempts to remove Borqei because of his views — which resembled those of the Sunnis — happened under the leadership of Borujerdi, one of the important advocates of closeness between Shiites and Sunnis. In another example, Sheikh Ali Panah Eshtehardi, the imam (for prayers) of the Feyziyeh School, the central school in the hawza of Qom, was harshly scorned and cursed after he criticized a Shiite narrative about the Sunni caliphs.

More importantly, there are numerous institutions in Qom that are established to criticize and question the beliefs and views of other religions, with often combative and disparaging views when it comes to non-Islamic religions — precisely Shiism. In the latest example of this confrontational attitude toward other religions, Alireza Roozbahani, the head of the Center for Cults and Religions in the hawza, referred to Baha'ísm as a heretical cult and objected to the idea of granting civil rights to the Baha'is and warned that it would lead to them asking for other kinds of equal rights.

The Iranian political establishment, while closely monitoring the hawza’s activities in a security-minded framework, follows its own political ideology. Their general policy is to encourage the idea of closeness between different branches of Islam, but at the same time seriously confront any form of activity by the followers of other religions. This extends even to those Shiites whose ideologies are considered to be heretical and cultic. This double standard clearly shows the tactical and utilitarian attitude of the political establishment in regard to religious tolerance and betrays a lack of fundamental strategic planning on this issue.

There are clear differences between the hawza of Najaf and the hawza of Qom when it comes to the three elements mentioned above. The diverse social environment of Iraq and the city of Najaf itself has, to a degree, prevented the emergence of radical religious outlooks. The city, until a few decades ago, had a Christian and Jewish minority and Sunni tribes also lived in the oases around the city. Therefore, we do not witness overtly combative attitudes toward followers of other religions. This is despite the fact that during its history, the city had witnessed several cases of religious violence between different sects of Shiite Islam; the most clear example of this are the clashes between the Usuli and Akhbari followers in the 18th and 19th centuries.

Under the leadership of Ayatollah Sayyid Abul Qasim al-Khoei, the hawza of Najaf gradually moved toward institutionalizing the idea of religious tolerance. By establishing a series of rules in Shiite seminaries, Khoei created a more patient and tolerant attitude in the hawza of Najaf. The most important examples of these rules are: preventing religion from meddling in politics and vice versa; preventing the jurists from attaining any political power; stopping certain punishments such as stoning, mutilation and so on; and accepting equal rights for non-Muslims such as allowing holy books other than the Quran to be used for taking an oath in the courts of Muslim countries.

The great potential for tolerance that we witness in the hawza of Najaf comes from the generation of scholars who were Khoei's students. In addition, Ayatollah Ali al-Sistani has been influential in furthering this view. In an interview with Al-Monitor, Andrea Trentini, the representative of the Christian organization Sant’Egidio, talked about his trip to Najaf and the high level of tolerance he encountered among the members of the hawza and people of Najaf in general. Trentini and another Christian official from the Vatican visited Sistani on Jan. 8. During this visit, Sistani said that any intolerance or violence toward Christians would be an irrecoverable loss for the whole of Iraq.

The relative separation between hawza and state in Iraq has created more potential for tolerance in Najaf. Secular and non-religious factions are active in the city and are not faced with any opposition. For example, the office of the Iraq Communist Party is next to the house of Ayatollah Khoei in Najaf and conducts its social and political activities without any problems. Sayyid Javad Khoei, a descendent of Ayatollah Khoei, during an interview with Al-Monitor, considered this natural, and brought examples of other forms of activities in Najaf that are also not in accordance with the general system of the hawza and yet are allowed to be pursued.

The tolerance in Najaf cannot be expanded to all active groups in the hawza. Next to the general tolerant atmosphere of the hawza, there are small centers that advocate various forms of violence, conflict and intolerance. Leaders of certain religious-political factions are also present in Najaf, and they ask for the laws to be adjusted to the Islamic Sharia, a request that is in many cases against the idea of religious tolerance. In addition, we can still find intolerance against other religions among a few of the teachers and students in the hawza of Najaf itself.

In general, advancement in the communication systems, establishment of religious study centers and research opportunities — mostly in the West — for the Shiite seminary students, have all resulted in a higher level of tolerance among the members of the hawza, but not necessarily the establishment itself. One could also hope that the re-emergence of the hawza of Najaf as a serious competition for the hawza of Qom, in spite of their small differences, will result in even more potential for tolerance.