Throughout its history, the Shiite seminaries in Najaf, Iraq, have witnessed massive changes in curricula, with an expansion in the number and scope of subjects offered. 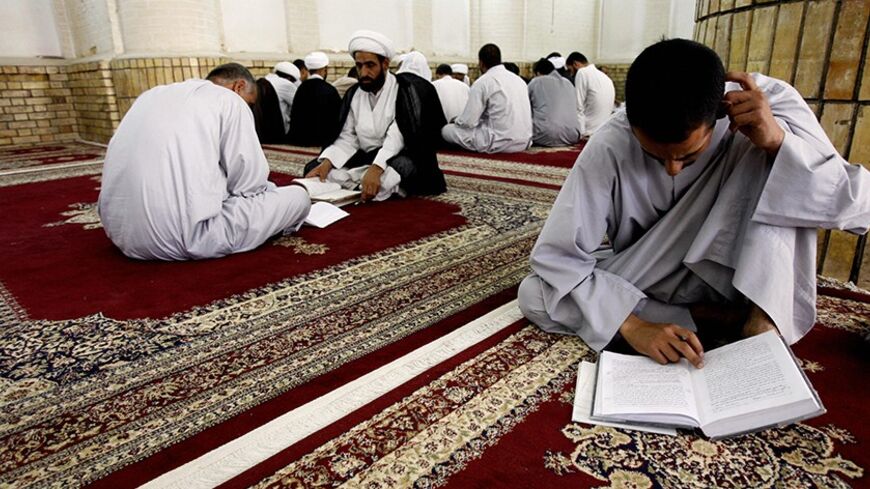 An Iraqi Shiite scholar (2nd L) lectures a student while another one (R) reviews his lesson at a religious school for clerics in Najaf, Aug. 5, 2006. - ALI AL-SAADI/AFP/Getty Images

The Shiite seminary (hawza) in Najaf witnessed huge developments in its educational program in the mid-20th century, especially between the 1940s and 1960s. The number of students ranged between 15,000 and 20,000, and they came from various countries that have Shiite populations. More than 1,000 students used to attend the lessons of Sayed Abu al-Qassem al-Khoei alone. Khoei is considered the founder of the doctrinal approach that has prevailed in Najaf and Qom to a large extent. Coincidentally, the first academic faculty in Najaf was founded by Mohamad Rida al-Mozfer in 1958, and many prominent Najaf scholars graduated from it.

Since the 1970s, with the Baath Party’s rise to power, the hawza in Najaf slumped due to the political clampdowns targeting it. The suppression tightened following the Shiite political awakening (Sahwa) in Najaf and its supporters’ clashes with the ruling regime at the time. Moreover, due to the Iran-Iraq war, the number of foreign students significantly dropped. Finally, the crackdown on the 1991 Shiite uprising resulted in an almost complete paralysis of the hawza’s activities.

After the fall of former President Saddam Hussein’s regime in 2003, all the instructors of the hawza in Najaf disappeared, except for a generation of older teachers who had been deprived of educating new generations for a long time. At the time, the number of students was estimated at 3,000. They included old students who were educated under Khoei, like Ali al-Sistani himself, and also there were some young students who entered the hawza in the mid-1990s, following the emergence of the Sadrist Movement, in the context of the former regime’s “faith campaign.”

Since 2003, the Najaf hawza has followed the track of qualitative and quantitative development. The number of students increased from 3,000 to 13,000, according to a census carried out by Al-Monitor’s correspondent as part of a field study about the situation of the hawza. Foreign students were heading to Najaf once again, and they were estimated at a total of 50 students, from India, Thailand, France, the United States, Canada, Iran and other countries.

The number of higher studies’ courses — known as bahth al-kharij — increased to 20. The course of Sheikh Ishaq al-Fayad, one of the four religious references of Najaf, witnessed the highest level of attendance, estimated at 500 people. Moreover, there were many primary and intermediate level courses.

The variety of the educational subjects has also increased compared with the past. There are now philosophy, mysticism and epistemology courses, in addition to comparative religion and other new subjects, not to mention courses on jurisprudence, which was the only field that had been studied in the past.

Several academic universities and faculties were established in Najaf in the past 10 years and they accommodated many students, as these universities offered a traditional hawza education and a university education at once. Furthermore, they have university and hawza teachers, thus allowing for more information exchange and academic debate between the two parties.

Dar el-Ilm School, owned by the Imam Khoei Foundation, is one of the main projects in this context. The school has a faculty specialized in comparative religious studies. The project is still underway, but its director, Jawad al-Khoei, told Al-Monitor that its curricula and general program have already been set. Khoei is considered a main figure of the academic hawza generation in Najaf, as he combines religious and academic scholarship at once.

Khoei added that he intends to invite non-Muslim professors to teach other religions in Najaf to students interested in comparative religious studies.

A number of students have recently chosen to complete their academic studies in foreign universities, some of which are non-Muslim, such as Saint Joseph University in Lebanon, where a number of students and professors from the Najaf hawza are completing their studies. Moreover, some are studying at non-Shiite Islamic universities, such as al-Bayt University in Jordan.

There are also intensive attempts on the part of educational and research institutions in Najaf to send student delegations to Western universities within the framework of student exchange projects, whereby Najaf hosts Western students in areas related to Islamic and Shiite studies, and Najaf students go to Western universities to complete their studies in their fields of specialization.

At the level of religious deduction methodology, there is a remarkable development exemplified by the great openness in Najaf toward new approaches and visions. For example, there is a peculiarity that has recently emerged in the seminaries of both Najaf and Qom toward the historical reading of religious phenomena, especially in the field of jurisprudence studies. This peculiarity can be specifically noted in the methodology of Sistani and his sons Mohammad Reza and Mohammad Baqir in Najaf, and the methodology of Sheikh Montazeri (who died in 2009) in Qom.

Moreover, the trend toward comparative studies of religions and sects has greatly expanded, showing a kind of openness toward non-Muslim and non-Shiite religions.

What significantly highlights the role of Najaf is its self-distancing policy from the projects of political Shiism that are exemplified by the theory of velayat-e faqih (rule guided by an Islamic guardian). This is what particularly characterizes Najaf in contrast with Qom, which has come under the direct influence of the velayat-e faqih current. Najaf, however, still hasn’t been able to issue general theories about its vision, which contests the theory of velayat-e faqih. This lack of a clearly stated vision means it is not safeguarded against the influence of the political Shiism currents backed by Iran's political system.