The political differences between Qom and Najaf clerics indicate a sharp conflict between the two schools after Ali al-Sistani, whose death will create a broad vacuum in the Shiite scene. 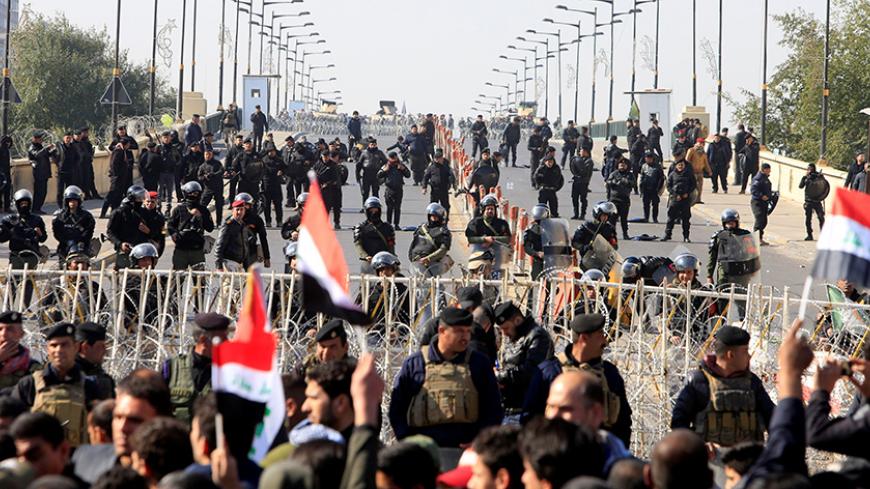 Riot police stand in front of demonstrators during a protest demanding an overhaul of the election supervision commission ahead of provincial elections due in September, in Baghdad, Feb. 11, 2017. - REUTERS/Alaa Al-Marjani

NAJAF, Iraq — Amid the reform protests taking place in Baghdad, political differences between Shiite clerics interested in Iraqi affairs have been widening in the two cities of Qom and Najaf.

While controversial cleric Muqtada al-Sadr, the leader of the Sadrist movement, continues to support the demonstrations that significantly sparked these Shiite differences, Shiite clerics based in Qom have issued fatwas condemning the protests and saying that they would lead to a devastating mess. The most recent demonstration took place Feb. 17 in Baghdad and in other Shiite provinces in southern Iraq. On Feb. 11, five protesters were killed and 320 were injured in Baghdad. Other Shiite clerics close to the Iranian regime also issued fatwas against the protests in Iraq, such as Kazem al-Haeri and Sheikh Mahdi Asefi.

Kamal Al-Haidari, a high-ranking cleric close to the Iranian regime, said during his religious lectures Feb. 16, “My religious and political position is that institutional reform cannot take place through begging in the streets,” and that “reform should only be brought about through constitutional and legal institutions.”

Meanwhile, the Sadrists sharply responded to his statements by accusing him of unfairness, lack of impartiality and unawareness of Iraqi affairs. Saleh Mohammed al-Iraqi, a close associate of the Sadrist movement leader and an occasional spokesman of his, launched a scathing attack on Haidari, describing him as unauthorized and lacking expertise and fairness in opinion regarding the protests and the calls for reform.

“If you are to give your opinion about a certain topic, you should be fair, and you should be following the related developments. You cannot live in Qom and interfere in the affairs of Najaf,” Iraqi said.

This is a clear indication that the escalating dispute between Sadr and Haidari falls within the context of the different views of Qom and Najaf. The dispute is originally over the relationship between the religion and the state, and it started when some Shiite authorities in Qom led the Iranian Revolution against the Shah and got deeply involved in the details of the country’s political affairs at a time when Najaf kept a clear distance from politics and the government altogether — even after it was offered a chance to rule after 2003.

This led to a fierce debate between the Najaf and Qom schools. While the former represents the traditional vision of the Shiite opposition to the participation of the clergy in power, the latter represents the pro-velayat-e faqih (doctrine that hands supreme power to a religious figure) modern vision. While the controversy gradually started to evolve with the degeneration of the unstable political situation in Iraq, it is now expanding to include detailed political topics related to the political affairs of Iraq.

Haidari enjoys the full support of the Iranian regime. The official Iranian Al-Kawthar TV, an Arabic-language channel, offered him a show that has been on for more than a decade. The show aims to criticize the ideological positions and the related political affairs opposing the official Iranian stance, and it had provided Haidari with fame and influence among the Shiite Arabs, especially in Iraq.

A source close to Haidari said on condition of anonymity that Haidari has also received financial support directly from the office of the supreme leader of Iran, Ayatollah Ali Khamenei, on a monthly basis. In addition, the Iranian regime has provided Haidari with special security protection from the Islamic Revolutionary Guard Corps, while many other senior clerics in Qom were not treated with such privilege.

Consequently, Haidari allowed himself to claim the Shiite authority for his own and proclaim himself as “the religious authority, Sayyid Kamal al-Haidari,” as well as expand his circle of influence among Iraqis. Today, he gives weekly intensive lectures about Shiite theology, jurisprudence and mysticism, in addition to conveying his own political views.

Meanwhile, he has been trying to gain popularity within Najaf’s hawza since 2003, but he has been failing due to the opposition expressed by the traditional school there.

Haidari is known for not only opposing, but even attacking Najaf’s traditional school and its main pillars, such as Abu al-Qasim al-Khoei and Ali al-Sistani. The dispute between them was originally due to Haidari’s affiliation with the Iranian velayat-e faqih, clearly opposed by Najaf, and he is now one of the prime candidates for the Iranian regime’s endeavor in Najaf after the 86-year-old Sistani, the current authority there.

Meanwhile, instability prevails within the Sadrist movement over becoming associated with either Najaf or Qom. The Sadrist movement is believed to be the product of the fundamentalist Shiite vision that opposes Najaf’s traditional school. As a result, Sadr’s father, Sayyid Muhammad al-Sadr, was involved in a bitter and long struggle with Sistani and other religious authorities in Najaf, which is why Sadr kept Sistani at a distance after the death of his father in 1999. He then became associated with Haeri in Qom, who provided him with a religious cover to form the Mahdi Army in resistance to the US forces.

However, political difference soon drove a wedge between Sadr and Haeri, who abided by the official Iran position to the word, while Sadr wanted to maintain a sense of independence in his positions.

This prompted Sadr to turn to Haidari in August 2013, when Sheikh Mahmoud al-Jayashi, the director of Sadr’s office, was able to arrange a meeting between the two because he was also one of Haidari’s most prominent disciples.

After the meeting was held, Sadr's office stated, that both sides “discussed the region’s affairs in general and Iraq’s issues in particular,” noting that “the two agreed to coordinate future positions.”

Regardless, the current political disputes between the two are pushing Sadr to reconsider his positions so he does not lose popularity after losing his religious cover.

In a nutshell, all these developments are signs of broad political and religious disagreements that would take over Iraqi society after the death of Sistani, the strongest and most important sponsor of the political process in Iraq after 2003.