While Shiite authorities in Iran and Iraq have historically had a close relationship, Iran has been dismayed by Najafi clerics's refusal to support Syrian President Bashar al-Assad in Syria’s civil war. 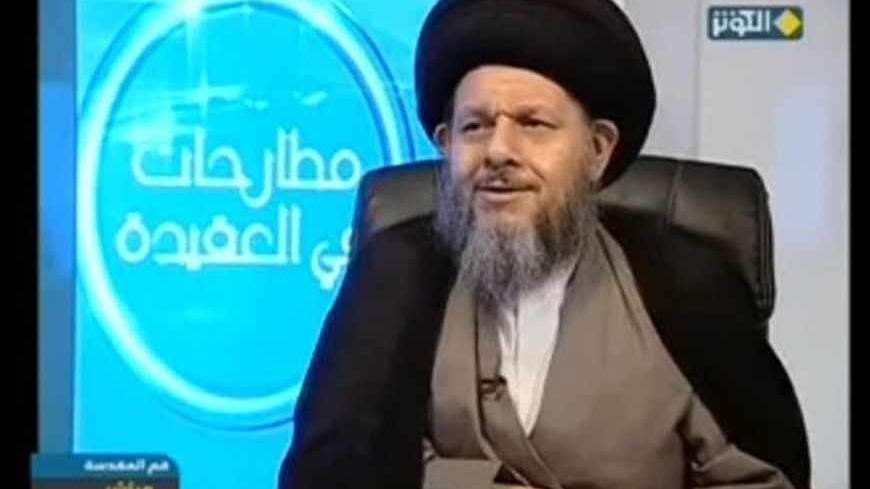 Sayyed Kamal al-Haidari's videos in Arabic have spread Iran's message to the larger Muslim world. This one can be seen on YouTube. -

Following the 2003 events, the Iranian regime adopted various methods in dealing with Iraqi society. The use of clerics who represent Iran’s will in Iraq is one of the methods that has been adopted thus far. This is due to the existence of a Shiite majority in Iraq, as well as the presence of the Najaf seminary there — the highest religious center for Shiites across the world. Thus, these clerics played a special role in the representation of Iran, both in Iraq and other countries with Shiite populations.

Iranian clerics are divided into two main groups in Iraq. The first is made up of the seminary’s underclassmen, who were used by Iran to form Shiite militias tasked with maintaining Iran's regional interests in Iraq. The second group is made up of the upperclassmen, who represent the official Iranian position in Iraq, in order to establish a unified Shiite stance amid the escalating sectarian conflict plaguing the region.

This office distributes financial aid to the seminary’s students, as other authorities do. As the official representative of Khamenei in Iraq, it also issues statements related to Iraq in particular and to regional affairs in general.

Ayatollah Seyed Kazem al-Haeri represents the Iranian position, which supports the Shiite militias in Iraq. Haeri is an Iranian cleric who studied in Najaf and now lives in Qom. He established an office in Najaf, and he has an intimate relationship with the Mahdi Army and Asaib Ahl al-Haq. Qais al-Khazali, the leader of Asaib Ahl al-Haq, is one of his followers, and Haeri has issued a number of fatwas in support of the work carried out by the armed militias in Iraq since their inception.

At the media level, the Iranian Arabic channels have long used Sayyed Kamal al-Haidari to spread Iran's interpretation of Shiism in the Arab arena. Haidari would use the approach of religious protests to respond to Sunni beliefs, especially those of the Salafists and Wahhabis, who are the religious opponents of Shiites in general and the Iranian regime in particular.

In his recent video episodes, Haidari began his scathing criticisms of the Najaf authorities without naming them, in an attempt to differentiate between the revolutionary approach adopted by some of Iran’s scholars toward Ruhollah Khomeini, the founder of the Iranian revolution, and the approach of the Najaf scholars, which calls for the separation of religion and politics. According to Haidari, there is an attempt to sanctify and protect the [Najaf authorities] from any criticism they may face as a result of their failure.

A source close to Haidari told Al-Monitor that Haidari is in contact with Qassem Soleimani, an official appointed by Khamenei for Iraqi affairs, and that Khazali is also in contact with Haidari. This explains Haidari’s recent position, which shows Iran’s discontent with the Najaf positions against Shiite intervention — and in particular that of Iraqi militias — in the Syrian events.

This came in parallel with the issuance of fatwas by Haeri permitting travel to Syria to defend Shiite holy sites. This led the Najaf scholars to declare that going to Syria for jihad is wrong and contrary to the orders of the religious authorities.

In addition to the role of Iran’s clerics in running the policies of the Iranian regime, Iran counts on a number of these clerics — Sayyed Mahmoud Hashemi (the former head of the judiciary of Iran), Haeri and Haidari — to be the successors of the current Najaf authorities. Still, those who know the ancient traditions of this historic institution hold that the attempt to establish an authority in Najaf will be very difficult.

Finally, the activist approach adopted by the Iranian clerics in Iraq was not widely followed by Iraqi society, and it has even raised criticism, as the Najaf authorities, and especially Sistani, have a special place among Iraq's Shiites that makes them refuse any kind of inflammatory calls against them.