The Rise of 'Cleric Militias' in Iraq

In recent years, Iraq has witnessed a rise in militias led by Shiite clerics, with some fearing that Sunnis may soon follow suit, thus exacerbating the regional sectarian conflict. 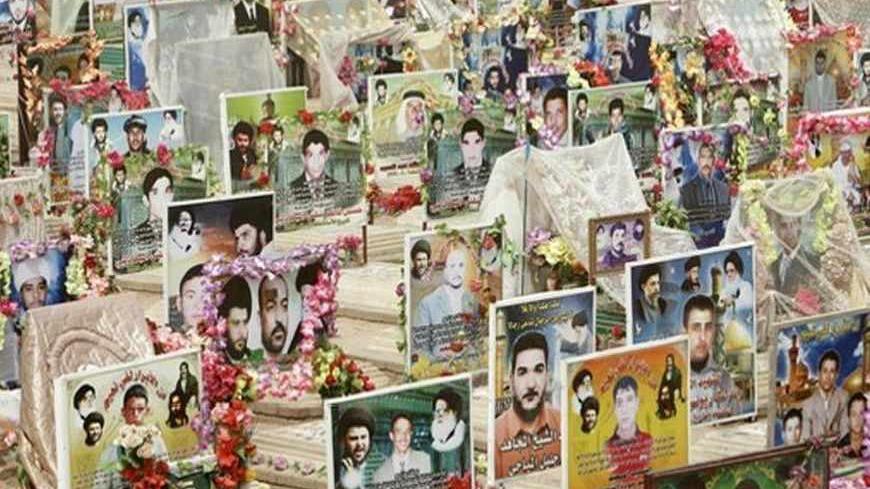 Posters of late Shiite Mahdi Army members are displayed on their graves in a Sadrist cemetery in the holy city of Najaf, 160 km (100 miles) south of Baghdad, Sept. 13, 2008. - REUTERS/Ceerwan Aziz

Despite the long history of Shiite clerics attempting to influence politics in their communities, it is only in the past few decades that Shiites have witnessed clerics leading militias. The Iranian Fada’iyan-e Islam movement can be considered the first. This movement was led by a young cleric named Navab Safavi, and it targeted intellectual, religious and political figures who opposed its views. One of the movement's most well-known victims was Ahmad Kasravi, an Iranian historian and linguist. Following the Iranian revolution, Safavi was transformed into a symbolic hero, leading many Shiite revolutionary groups to emulate him. Furthermore, the jihadist Muslim Brotherhood movements had a general influence on revolutionary Shiite parties.

The Islamic Dawa party is the first example of an Iraqi Shiite party that has ties with Shiite religious figures. The party engaged in military actions against the former regime, which sometimes resulted in civilian deaths. In 2003, the Mahdi Army was established. This militia was led by Muqtada al-Sadr and became the first Shiite militia in Iraq directly led by a cleric. The Mahdi Army did not receive any support or acceptance from officials in the Shiite seminaries, and even faced criticism from Shiite authorities in Najaf. This was mentioned in a book titled "The Medical Therapeutic Journey of Sayyed al-Sistani and the Najaf Crisis," written by Sistani's official spokesman, Hamid al-Khafaf.

In my interview with Mohammed Bahr al-Ulloum in December 2010, he said that Sistani had warned against providing any type of support to Shiite militias, considering them in violation of both religion and the law.

Finally, Sadr was forced to freeze the activities of the Mahdi Army in August 2007, after the militia was involved in acts of sabotage and massive violations of human rights. This also came after Sadr had a spiritual transformation regarding political and religious work in Iraq. This led to certain groups splintering off from the Mahdi Army to form new militias, the most prominent being Asaib Ahl al-Haq. This militia continued to carry out military operations, specifically against the US army in Iraq, with support from Iran.

Between 2008 and 2011, I met with many leaders of Asaib Ahl al-Haq in Iran, where they receive training and where those injured in military operations receive medical treatment. Following the withdrawal of US forces, the group turned to political participation and changed its name to the Ahl al-Haq movement. The movement [continued to] target those groups they considered to be in violation of Islamic law. Muhannad al-Gazi, an Iraqi social activist, told Al-Monitor on July 16 in Baghdad that groups affiliated with Asaib Ahl al-Haq have targeted cafes in the Karada district of Baghdad since the start of Ramadan this year. According to Gazi, one of the attackers was killed during clashes with cafe owners. Gazi said that when one of the group's members dies, they typically put up posters announcing the fighter was "martyred while carrying out his sacred duty." Moreover, there are frequent reports that Asaib Ahl al-Haq are participating in the sectarian fighting in Syria.

Since February 2013, there have been announcements about the formation of new militias at the hands of a cleric named Wathiq al-Battat. The latter has also formed a political party named Hezbollah Islamic Renaissance, which aims to enter the electoral race to establish a religious rule in Iraq according to the Iranian model. This has also coincided with military action on the part of Battat against Baathists and those he described as "takfiris," according to statements made by Battat during an interview with the al-Baghdadiyah TV channel. Battat had previously been linked to the Badr Corps, which was the armed wing of the Islamic Supreme Council of Iraq (ISCI), and later to the Mahdi Army in its fight against the US Army in Iraq. According to statements made by Battat in the aforementioned interview, he spent a long time in Iran, where he obtained a master’s degree from a military college. He also said that some Shiite religious scholars supported him when he founded the Mukhtar Army. These scholars include the leader of the Iranian Revolution Ali Khamenei, Kamal al-Haydari, Fadel al-Maliki and others. This claim has neither been confirmed nor refuted by these figures.

The Iraqi government has issued an arrest warrant for Battat, calling on citizens to cooperate capturing him. Yet, in the meantime, Battat is making appearances on satellite TV channels and holding formal, public meetings. The fact that the government has not been able to arrest him raises questions about the possibility that he is receiving regional support that the government cannot oppose. This is especially true given that Battat has previously claimed responsibility for attacks on Camp Liberty, which houses members of the People’s Mujahedin of Iran, a group that opposes the Iranian government.

Finally, this rise in Shiite militias could persuade Sunni clerics to follow suit, especially following their heavy presence in recent protests in Sunni areas of Iraq. This raises serious concerns about the escalation of the sectarian crisis in Iraq and the region in general.