Grand Ayatollah Ali al-Sistani is under increasing attacks from within the Shiite religious establishment for his reserved and amicable approach. 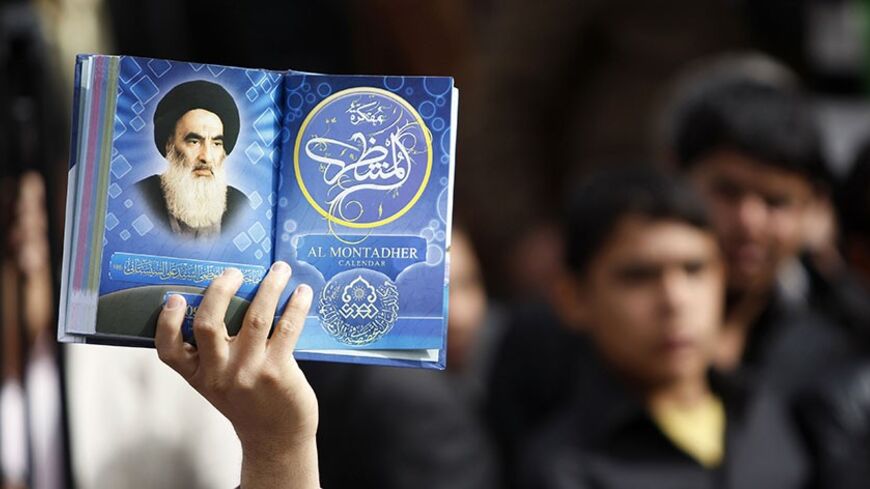 Under his religious leadership, Grand Ayatollah Ali al-Sistani has been committed to moderation and has treated with tact and wisdom the situation in Iraq, which may ignite with each crisis, small or large. However, it gradually became apparent that Sistani’s behavior does not appeal to some Islamist currents, because he did not succumb to their political agenda.

Sistani has been heavily criticized by some Sunni and Shiite parties for not supporting resistance movements against the Americans when they were in Iraq and for not entering the sectarian conflict in favor of one side against another. But these criticisms were usually directed at him by Islamist parties or groups from outside the religious establishment. This time, however, the criticism is coming from within the religious establishment, and from those in the same Islamist trend.

Sheikh Mohammed al-Yacoubi, the religious leader of the Al-Fadilah (Virtue) Party, which is part of the Iraqi government, has scathingly attacked Sistani in a series of speeches over the past month. Yacoubi considered Sistani hostile to what’s right, called him the pharaoh of the times and considered his positions a betrayal of the Shiites.

The reason for all this is that Sistani did not cave to the demands of religious parties to establish a religious state applying Sharia in Iraq. Sistani had recently rejected the Jaafari personal status law because it included violations of human rights, rights of other sects and rights of religious minorities.

Historically, criticisms against Sistani started from the early 1990s, when a political current within the Najaf hawza (Shiite seminary) opposed the traditional approach, which was represented and led by Sistani. That current received indirect support by the former Iraqi regime because it represented an Arab religious reference against the traditional Shiite current, which was often of Iranian origins. That trend later became known as the Sadrist movement, named after its founder Mohammad al-Sadr, Muqtada al-Sadr’s father.

The phrase “the silent hawza” was made famous by Mohammad al-Sadr as he criticized Sistani’s approach, who preferred to work in a calm way and deal wisely with the overall situation instead of taking revolutionary positions. In contrast, Sadr used the “vocal hawza” approach, which adopted a revolutionary discourse in leading the Shiite community.

The conflict continued after the regime’s fall. Muqtada al-Sadr adopted his father’s discourse in dealing with the US occupation, as he put it. But gradually, and especially after the US troops left Iraq, the rift between Muqtada al-Sadr and Sistani’s followers was reduced significantly. That was helped by Sistani’s positive role in resolving the crisis that took place between Sadr’s followers and US forces in Najaf in 2004.

Some groups remained separate from the main Sadrist current regarding their anti-Sistani attitudes. The most prominent of these groups is the Virtue Party, led by Yacoubi, one of Mohammad al-Sadr’s followers. There are also militias that broke away from the Sadrist movement, joined the Iranian side and considered themselves not bound by Sistani’s orders but affiliated with the supreme leader of the Islamic Revolution in Iran. The most prominent of these groups is Asa’ib Ahl al-Haq.

The position of the Iranian regime has not been welcoming of Sistani since he became a religious leader until the fall of Saddam in 2003. Yet, the situation later changed because of the key and visible role played by Sistani in managing the situation in Iraq in general and the leadership of the Shiite community in particular.

There is another extreme Shiite current known as the Shirazi current, which criticizes Sistani because of his call for affection and closeness with the Sunnis and for opposing violations carried out against their sanctities by Shiite extremists.

When searching for a reaction to the criticisms from within or outside the religious establishment, it is very difficult to find any position by Sistani himself, his office or his followers. That is because Sistani has followed the policy of silence and indifference for things that are not crucial, especially those that may cause strife and conflict. Sistani also ordered his office to not issue any statement or declaration in such situations, according to what a source close to Sistani told Al-Monitor.

Sistani’s moderate and tolerant positions have made ​​him a man of peace and a safety valve in Iraq. Yet, despite that, many fear that his discourse has become inaudible to the decision-makers in the country. On the other hand, many worry about what will happen when Sistani departs, as there are schemes by his rivals to acquire the Shiite leadership in Najaf after Sistani’s departure.