Iraq sends Khamenei's envoy back to Iran with little to show

It appears Iran is trying to draw Iraqi Shiites together, but many religious leaders aren't willing to be herded. 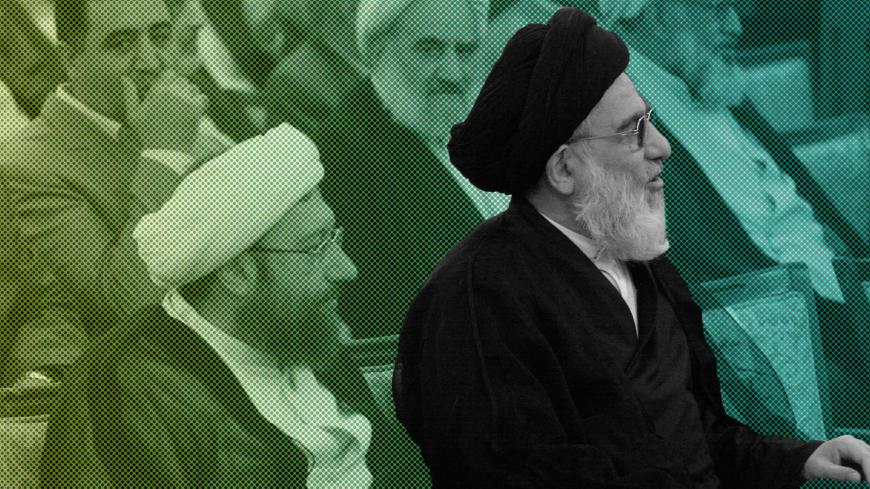 Ayatollah Mahmoud Hashemi Shahroudi, the newly appointed chairman of Iran’s Expediency Council, visited Iraq recently, fueling speculation about his political agenda. His meetings indicate that he most likely was seeking to unify Shiites ahead of the 2018 elections, although he doesn't appear to have succeeded.

Shahroudi, who is a dual Iranian-Iraqi citizen and was a senior leader in the Islamic Dawa Party and the Islamic Supreme Council of Iraq before he became involved in Iranian politics, was warmly welcomed by those two groups, but later in his weeklong visit, he found himself snubbed by others.

In Najaf, however, Shahroudi was not welcomed at all. He did not meet with any of the four leading religious authorities there, even though he is one of the most prominent graduates of the Hawza (Shiite seminary) in Najaf and most likely knows all four clerics from the years he studied there.

Sources close to Grand Ayatollah Ali al-Sistani in Najaf said religious authorities there refused to receive Shahroudi — even though they knew in advance about his visit — because they resent some aspects of Iran's policies regarding Iraq. It seems the rejection was a source of embarrassment to Shahroudi when he returned home, where he issued a statement that his visit was not an official one but merely a religious trip “to the holy sites and shrines of holy Imams.”

"What has been published in some media outlets about other objectives is unfounded," he said.

But Shahroudi met with the prime minister and other senior political figures in Baghdad and with Najaf’s political officials during his visit to the provincial council. Thus, his statements upon returning to Iran don't make much sense.

Of note, it is the custom for Shiite clerics to meet with their counterparts who visit their cities. However, sometimes when they have a problem with each other, they don't leave any openings in their schedules for meetings.

Some even go further. For instance, Sheikh Wahid Khorasani, a top Shiite authority in Qom and a graduate of the same seminary Shahroudi attended in Najaf, has been a critic of Iran’s Supreme Leader Ayatollah Ali Khamenei. Khorasani leaves Qom every time Khamenei visits.

Given that trend, Shahroudi's failure to meet with the Shiite authorities in Najaf — even though he remained there for days — raises suspicions. It would seem, based on his meetings, or lack of them, that his political agenda was indeed to unify Shiites ahead of the elections.

Mohsen Rezaei, the secretary of Iran's Expediency Council, accompanied Shahroudi on the trip. They met with the leader of the National Wisdom Movement, Ammar al-Hakim — who recently defected from the Islamic Supreme Council of Iraq, which was founded with Iranian support in the 1980s. In the meeting, Rezaei stressed the need for Shiites to be unified in Iraq and called for a common vision among Iraq’s Shiite political parties.

Amir al-Kanani, a Sadrist leader, criticized Shahroudi's political agenda "to form a pure Shiite bloc bringing together all of the National Alliance’s leaders.” Kanani went on to say, “Iran has no new project other than the formation of a Shiite bloc in Iraq.” He stressed that “such a sectarian polarization will be countered by a sectarian Sunni polarization and nationalist Kurdish polarization.”

Shahroudi also met with Sheikh Qais al-Khazali, the head of Iranian-backed Shiite paramilitary group Asaib Ahl al-Haq. The group, a prominent faction of the Popular Mobilization Units (PMU), continues to have a military presence in Syria at Iran’s request — much to the dismay of Abadi and Sistani. During the meeting, Shahroudi stressed the need to maintain the PMU's diversity to ensure against any future risks, such as extremist militias.

In 2011, Shahroudi considered moving to the holy city of Najaf to establish a Shiite authority there. For the Iranian regime, he is a leading candidate to succeed Sistani, who currently holds the greatest influence among the Shiites but is known for being independent from Iran and opposing Iran’s political interference in Iraqi politics. Shahroudi is also a candidate to replace Khamenei as Iran's supreme leader, which sheds light on how important he is in the eyes of the Iranian regime.

Najaf is willing for Iraq to have independent and balanced relations with all regional parties, including Iran and Iran's enemy Saudi Arabia, and to have the PMU as part of Iraq's official security institution — not to be used outside Iraqi territory to serve foreign agendas.

Najaf also wants a national unity government to be formed away from any sectarian party membership quotas in Iraq, and for Iran to assume responsibility for the political and security failures that occurred during Maliki’s second term in power. Maliki, who was the Iraqi prime minister from 2006 to 2014, still has unlimited support from Iran.

Shahroudi's visit did not seem to achieve the goal of unifying the Shiite ranks. On the contrary, it delivered to the Iranian regime the message that the Iraqi challenge cannot be easily overcome.