The Shiite clerics of Najaf have always provided a spiritual reference to their followers, while at the same time playing an important role on various levels. 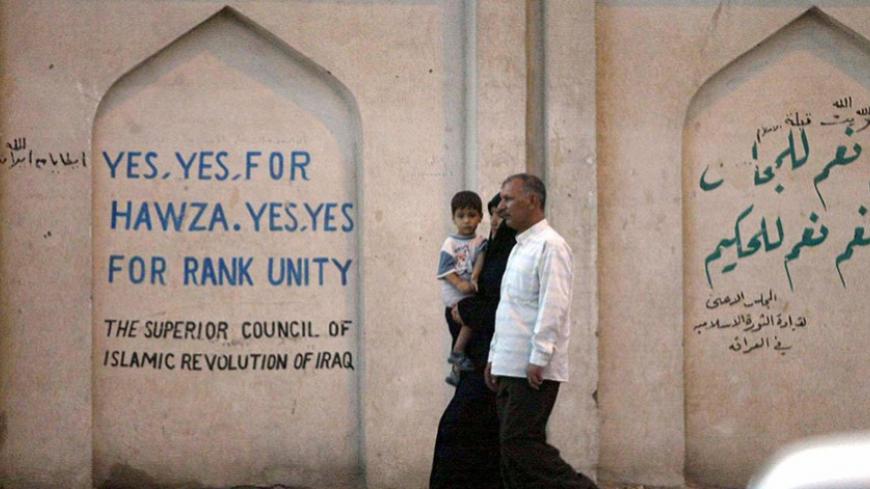 An Iraqi man and wife with child walk past a sign professing support for hawza, or Shiite religious leadership, in Najaf, Sept. 8, 2003. - KARIM SAHIB/AFP/Getty Images

NAJAF, Iraq — The house of Shiite cleric Ayatollah Ali al-Sistani lies a few hundred meters from the shrine of Imam Ali ibn Abi Talib in Najaf in southern Iraq. It's located in a poor neighborhood in the Houeich area, which comprises old houses and small shops. Sistani's house is no different from others in the neighborhood, and security measures around it are low profile. If it were not for the line of men standing outside waiting to greet the cleric, no one would know that such a prominent figure lives there.

Sistani, 84, is the most widely acclaimed figure for Twelver Shiites, especially in Iraq, India, Pakistan and the Gulf states. However, there are other Shiite clerics in Najaf, other Iraqi cities, Iran and other countries with Shiite populations. Among these prominent clerics are Ayatollah Mohammad Saeed al-Hakim, Ayatollah Sheikh Mohammad Ishaq al-Fayyad and Ayatollah Sheikh Bashir al-Najafi.

The hawza (seminary) in Najaf, which consists of religious schools where Shiite clerics are trained, was founded by the most prominent Shiite religious scholar, Sheikh Muhammad al-Tusi, in 1028 — even though some tend to believe that the hawza was established in Najaf decades before Tusi came along. During that time, sectarian strife had escalated in Baghdad. After his house and office were burnt down, Tusi fled Baghdad and settled in Najaf where he became a prominent scholar of Twelver Shiism. He became know as “sheikh of the sect,” and he is the author of two of the four main Shiite books that pertain the hadiths (sayings) of the Prophet Muhammad and the imams.

Given the lack of time, I was only able to visit two of the four Shiite clerics in Najaf, Hakim and Fayyad. During my visits, I noticed the simple life the two clerics are leading, in terms of their humble houses, which lack modern furniture and contain merely a few mattresses and cushions. I had a long discussion with Hakim about religion and a research topic presented in one of his books. He was generous enough to dedicate some time to answer my questions.

I asked Fayyad about the state of the clerics. He said that the Shiite clerics are characterized by political and financial independence, contrary to that of their Sunni brothers. The Shiite clerics are not affiliated with the government or the Ministry of Religious Endowments and do not receive any money from the government. Fayyad explained that the clerics and the hawza are funded by khums (a religious obligation to give one-fifth of one’s income to charity) and zakat (almsgiving), in addition to the other legitimate rights paid by the clerics' Shiite followers.

Every Shiite has to pay one-fifth of his annual net income to the clerics or their representatives. For their part, the clerics have the right to use the money to help the poor, orphans, scholars, teachers and students of religious schools. The money can also be spent on building mosques, religious institutes, libraries, hospitals, health centers or other facilities that provide social or religious services.

Sheikh Jihad al-Assadi, one of the Shiite clerics in Najaf, said in an interview with Al-Monitor that there are many funding sources for schools, mainly the endowments belonging to these schools, the donations of rich people and the legitimate obligations that comprise one-fifth of the annual net income of an individual. All payments are made within the mechanisms and conditions applicable in Islamic jurisprudence.

Assadi explained that a student's funding by the hawza is determined according to the student’s needs. Moreover, the amount of money granted periodically to the students is decided based on an exam that evaluates their competence. The amount paid is no more than what the average state employee makes.

In addition to the monthly salaries of teachers and students in religious schools, clerics and the hawza provide aid — using the money given as charity — for the students in case of marriage, illness and in emergencies.

Shiites have their own way of electing clerics, and these religious positions do not rely on bequeathing. Moreover, the cleric cannot name himself and elections are not held through ballots. The religious scholars name one person as a cleric to assume the post based on his knowledge, the extent to which his knowledge is spread and the number of his followers. Among the four prominent clerics in Najaf, Sistani has the largest number of followers and thus was named head Marja (religious authority).

The clerics have played a religious, social and political role since the great occultation of the twelfth imam. It provided a direct link between the cleric and his followers, and a political and financial autonomy of the clerics from the ruling regimes. The clerics have played prominent roles in the history of the Islamic nation through the fatwas they issue, which have had a significant impact on the course of events. Ayatollah al-Shirazi's fatwa, for instance, prohibited tobacco in Iran in 1891 to oppose the monopolization agreement of tobacco signed between Nasser al-Din Shah and Britain, which led the shah to annul the agreement.

Furthermore, two prominent Iranian scholars, Mohammed al-Tabtabai and Abdullah Behbehani led the Persian Constitutional Revolution of 1905, which was supported by the most prominent clerics, especially Mohammad Kazem al-Khurasani, Abdullah Mazandarani and Mohammed Hussein Naini. This in addition to the fatwa of Mullah Khurasani allowing jihad against the Russian invasion of Iran in 1909, and the fatwa allowing jihad against British colonialism — which was issued by Iraqi clerics about 1919-20 — and the fatwa calling for the Islamic Revolution in Iran in 1979, led by Ayatollah Ruhollah Khomeini.

There is no doubt that the clerics' position among their Shiite followers has granted them political influence, which governments take into consideration and seek to please. It is worth mentioning the role Sistani played in a political context. He refused the US military rule in Iraq and demanded the Americans to hand over power to the Iraqi ruling council and hold parliamentary elections. Sistani also monitored the government and refused to meet Iraqi politicians under US military rule, so these kinds of meetings will not be interpreted as support to politicians or recognition of their legitimacy.

Regardless of the religious, social and political influence of the clerics in Najaf, Sistani and the other clerics do not believe in velayat-e faqih (guardianship of the jurist). They instead call for a civil state rather than a religious one ruled by clerics, provided that it respects the principles and values of Islam.