The exhibition of wax sculptures in a museum in Najaf, a conservative Shiite city, marks a major reformist development and a cultural breakthrough. 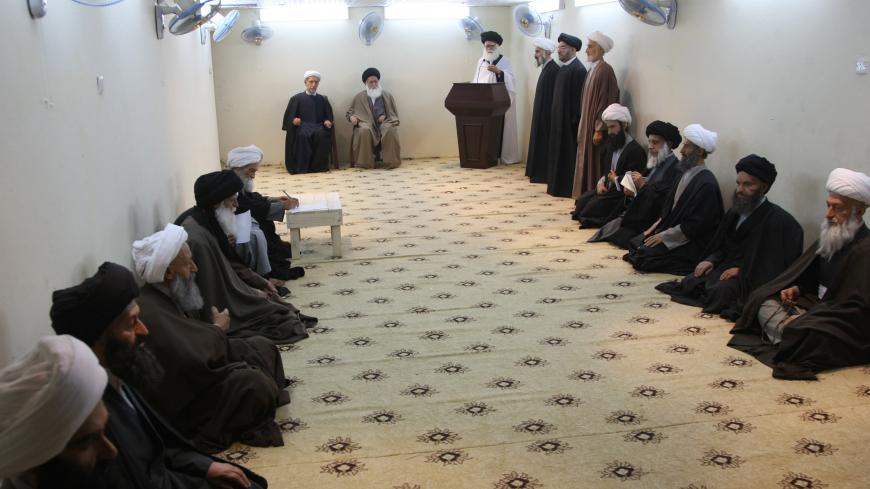 A tableau of a council meeting with waxwork statues of famous Shiite Muslim religious clerics is on display at one of the main religious schools in Najaf, Iraq, April 26, 2012. - QASSEM ZEIN/AFP/Getty Images

NAJAF, Iraq — An exhibit of wax statues depicting some 68 Shiite clerics and political figures opened at a museum in Najaf last month. It is the first semipermanent installation of its kind in Iraq.

Assil al-Talqani, the chairwoman of the Tourism and Antiquities Committee in the Najaf Governorate Council, told Al-Monitor at the Jan. 21 opening that the wax sculptures depict religious, political and cultural figures from Iraq and abroad who are connected to the predominately Shiite city of Najaf.

“Some were born in Najaf while others studied in the city, such as founder of the Shiite Hawza [Shiite seminary] Shaykh Tusi, Abu al-Qasim al-Khoei and Muhammad Baqir al-Sadr,” she said, adding that the museum is a tourist landmark that promotes both cultural and religious tourism.

Najaf Governor Louay al-Yasiri said during the opening ceremony that the statues will eventually move to a new museum once it is completed. Its construction began in 2011 and has yet to be finished.

That the museum will be located in the holy city of Najaf, home to the top Shiite clerics, has raised controversy among both Sunnis and Shiites. Some denounced it as a violation of Sharia, which has strict teachings about idols and statues. In 2012, when the idea of the museum was conceived, many Shiite and Sunni scholars criticized the plans.

"Even those dead people whose statues are displayed would have disapproved of this," Shiite cleric Ali Bashir al-Najafi told Al-Monitor.

Sunni Muslims forbid the erection of statues and consider the wax sculptures “idols.” The museum has been also criticized for displaying only Shiite sculptures. The wax figures waited in the basement of the Art Gallery in Najaf until the local culture and tourism committee prepared them for display in the museum.

Some moderate clerics view the museum as cultural enrichment for the religious city, a display that promotes openness to the world.

Hadi al-Hisnawi, the representative of Grand Ayatollah Ali al-Sistani in Karbala, told Al-Monitor that wax sculptures are acceptable because they contribute to cultural knowledge by introducing important figures to new generations.

He pointed to a fatwa permitting “owning carved statues that do not promote polytheism or corruption and that uphold religion and ethics.” Hisnawi stressed that Islam does not prohibit opening museums and erecting statues if they are a way to preserve history and monuments and serve to promote knowledge.

Ali Mirza, a member of the Najaf Provincial Council, told Al-Monitor, “I believe the museum is a tourism and cultural landmark that promotes both cultural and religious tourism, which would bring a great deal of money into the city of Najaf. The museum is likely to attract tourists from abroad as well as students and academics.”

He added, “Not one Shiite religious figure — despite their significance in religion — was immortalized under Saddam, given the regime’s sectarian policies. I believe the time has come to honor those pioneers."

Writer and Islamic scholar Ali Mumin told Al-Monitor, “The statues were executed in a specialized factory in the Iranian city of Esfahan. The museum is one of a kind in the Middle East.”

He went on, “The precision of these statues is admirable. They are as good as the statues in the wax museum in London. They are so [realistic] that you'd almost think they'd talk to you. These are not statues to be idolized, so therefore they are permissible. They were made in Iran, which is governed by jurists, and are displayed in Najaf, which is considered the capital of Islamic jurists. This means that these wax figures are legitimate despite some opinions to the contrary.”

Yousef Muhsen, who writes for Iraq's Al-Sabaah newspaper, told Al-Monitor, “The exhibit is a bold move that disregards several religious jurisprudences. This move further highlights the important heritage of the city of Najaf. The future museum will have various rooms, each one dedicated to one important historical figure and including some of the individual's works, such as copies of his publications, photos and his biography."

There is no doubt that the wax statues of Najaf are challenging the conservative stereotypes of this historic city. Will it encourage other cities in Iraq to follow suit?