Iraqi Grand Ayatollah Ali al-Sistani, who has been increasingly critical of the Iraqi government, is getting support for a bid for Nobel Peace Prize. 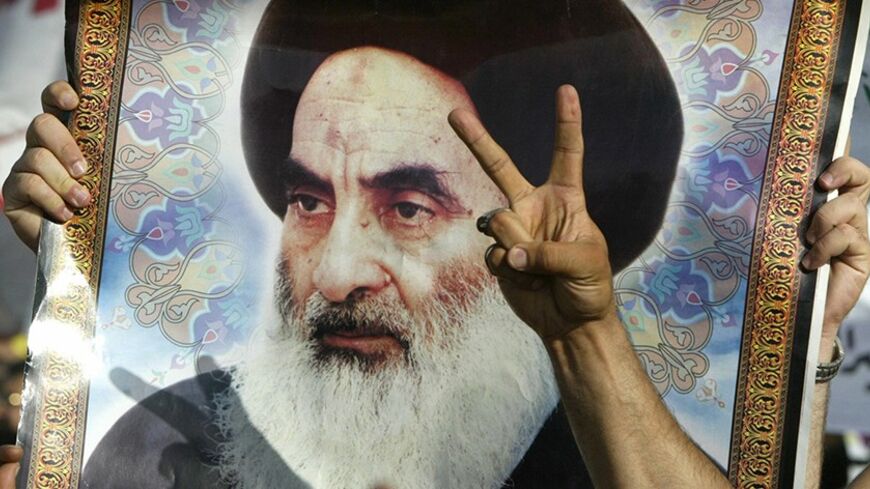 A V-sign for victory is flashed in front of a portrait of Grand Ayatollah Ali al-Sistani during a march through the streets of Baghdad, June 8, 2004.

Journalist Colin Freeman wrote a March 4 article for The Telegraph's blog titled, “Forget Obama and the EU. The man who should really have the Nobel Peace Prize is an obscure Iraqi cleric.” In it, he offered up several pieces of evidence to support his theory that this year’s Nobel Peace Prize should be given to Grand Ayatollah Ali al-Sistani, thus stirring a global campaign calling for Sistani’s nomination for the prize. This was not the first time that the idea has come up. In 2005, several parties, including specialists on Iraqi affairs and several Iraqi minorities, proposed this idea. The same year, New York Times columnist Thomas Friedman made the case for a Nobel for Sistani, writing, "If some kind of democracy takes root [in Iraq], it will also be due in large measure to the instincts and directives of the dominant Iraqi Shiite communal leader, Ayatollah Sistani."

It is not surprising to see Sistani’s name come up for the prize, given his prominent role in deterring religious extremism, promoting forgiveness and peace and acting wisely during Iraq's occupation and sectarian strife. His behavior made him Iraq’s safety valve, and his absence in times of distress would have led to far worse humanitarian catastrophes in Iraq.

What is strange, though, is that these demands coincided with a violent attack against Sistani from state authorities and radical clerics. Media outlets reported that Iraqi Prime Minister Nouri al-Maliki had expressed his rejection of what he called the “interference of some foreign religious references,” adding, “Despite our respect for them, this is unacceptable.” Maliki made these statements during a meeting with Justice Minister Hassan al-Shammari in early March regarding the personal status draft law, to which Sistani objected over possible violations of minority and human rights. Despite these objections, the cabinet recently passed the draft law for final voting before the parliament.

Maliki attacked Shiite clerics who strongly opposed the draft. Those clerics included Sistani, the three other religious references in Najaf and Ayatollah Hussein al-Sadr living in al-Kadhimiya near Baghdad. Maliki felt that Iraq needs a purely Iraqi religious reference, and by that he meant the radical cleric Muhammad al-Yaqoubi, who firmly backed the proposed legislation.

Yaqoubi started a scathing campaign against Sistani once the disagreements over the proposed law surfaced. In his most recent statement in early March, Yaqoubi described the stances of Shiite references and Sistani himself as “discordant voices that should be silenced.” In Iraqi culture, this means completely destroying a person and silencing his voice.

Al-Monitor called several sources close to Maliki to verify the media's revelations about his attack on Sistani. The sources confirmed the news and added that the tensions between Maliki and Sistani began after the latter refused to welcome any government delegation starting three years ago. By doing so, Sistani wanted to express his disapproval of the spreading corruption in the Iraqi government and its failure to fulfill its duties in providing security and other services.

The tension peaked recently when Sistani openly criticized Iraqi officials and asked the Iraqi people to carefully distinguish the good from the corrupt in the upcoming elections.

Under such circumstances, nominating Sistani for the Nobel Peace Prize would mean a lot, not only for Iraqi society, but for the whole region. Such a decision might shore up the reconciliation and moderation efforts in a highly flammable country and region, and might weaken the radical front both politically and religiously and prevent it from implementing its sectarian and extremist agendas.

Let us imagine what would have happened if Sistani hadn’t been present. The sectarian crisis in Iraq would have led to bloodier massacres and would have bred real civil wars between sectarian regions. The situation in Syria would have also been a lot worse. Sistani forbade his followers from going to fight there, and avowed his support for the decisions of the Syrian people without prioritizing the sectarian factor. As a result, massive numbers of ardent Shiites who were enraged by the radical Sunnis’ behavior toward their fellow Shiites and sanctuaries obeyed the fatwa of their religious guide and refrained from going to battle. Furthermore, in Sistani’s absence, Iraq would have become subject to the radical religious rule of religious parties. However, Sistani put his foot down by strongly refusing that Sharia be imposed on society and by defending the civil identity of the Iraqi state.

It is absolutely false that Sistani has radical religious views, although this has been claimed. For instance, Friedman reported that Sistani had issued a fatwa calling for homosexuals to be killed. However, Sistani has never issued a fatwa to implement Sharia-related punishment on people who violate Sharia. Sistani considers, as per jurisprudence, that neither the Islamic jurist nor any other person has the authority to implement these punitive measures, as they are restricted to the Prophet or anyone directly assigned by him.

This does not mean that Sistani is playing the role of a secular figure that defends absolute freedoms. His role must be understood in its clerical context. Likewise, we cannot expect the pope to act like Voltaire or Jean Paul Sartre. In fact, Sistani’s importance stems from two specific points:

First, he preserves religious devoutness by considering it a personal affair that should not be imposed on society. Second, he forbids the use of violence for religious and sectarian reasons and promotes forgiveness, love and peace among all sects of Iraqi society. Moreover, he represents an alternative to the Shiite velayat-e-faqih. Any weakness in Sistani’s stance would strengthen his radical counterpart that is linked to the religious crises and human rights violations in the region.

Given this importance and the unique role he plays in Iraq, Sistani is a strong candidate for the award. With instability across the region, especially in Iraq and Syria, an international endorsement of Sistani as a candidate for the Nobel Peace Prize would show firm and wide backing for his efforts and give the forces of stability much-needed support.