Islamist parties in Iraq are shedding their religious platforms to focus on reform in the campaign for upcoming elections and are also allying with secular parties. 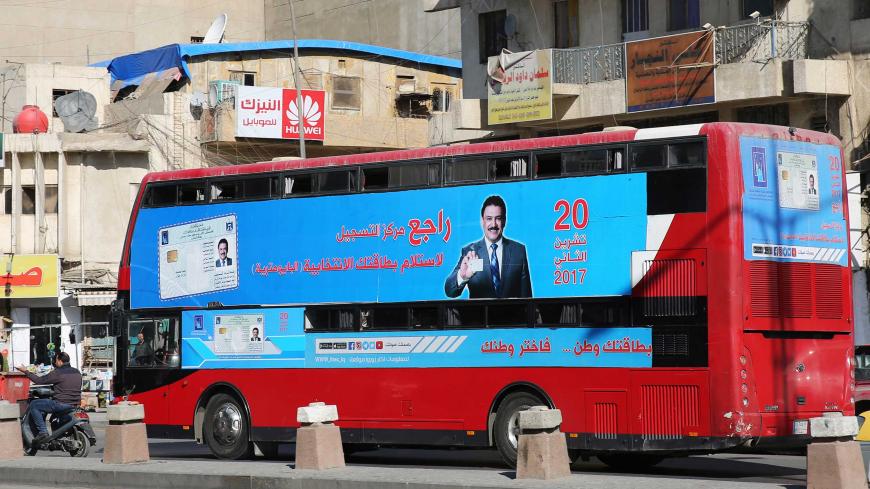 With elections scheduled for May, political parties in Iraq are busy forming alliances and gearing up for the campaign. Of note, slogans promoting political Islam are remarkably scarce. For this election cycle, all the political parties, including Islamists parties, have chosen to focus on civic life in their effort to get voters' attention and gain their confidence.

This development evinces the clear overall decline in Islamic movements in Iraq, both Shiite and Sunni, compared with previous elections, in which Islamist parties accounted for more than half of the registered groups. Also noteworthy is that many Islamist parties are competing this time under non-religious names and slogans and emphasizing secular themes. The most popular themes are calls for reform and promoting the civil state.

Indicative of this trend, parliament Speaker Saleem al-Jubouri, leader of the Islamic Party, the Iraqi branch of the Muslim Brotherhood, has decided to form an alliance with Iraqi Vice President Ayad Allawi as the Civil Assembly for Reform, while the Sadrist movement intends to run as the Alliance of Revolutionaries for Reform, allied with the Iraqi Communist Party.

Meanwhile Sadrist leaders have also indicated that they will join forces with a number of civil currents under secular banners. This is not entirely new territory for the Sadrists, as in 2015 they formed an alliance with secular currents, including the communists, to hold large demonstrations against corruption and sectarianism in the government.

The Shiite Islamist parties close to factions in the Popular Mobilization Units (PMU), among them Asaib Ahl al-Haq and the Badr Organization, have decided to highlight their victory against the Islamic State (IS) in their choice of banners and slogans — branding themselves the Alliance of Victory — rather than calling for Islamic rule as in past elections.

Since taking office in 2014, Prime Minister Haider al-Abadi, a member of the Islamic Dawa Party, one of the most prominent movements of Shiite political Islam, has taken a secular approach to governing. He has not called for a single religious project in his proposals submitted to the parliament or through executive actions. Instead, he has focused on bringing professionals and technocrats into the government, all the while limiting the influence of armed Islamist groups.

Abadi’s government has also not supported proposed religious-driven legislation, such as prohibiting the sale and consumption of alcohol and the Jaafari Personal Status Law, which called for the application of Islamic law in family matters. Even the Shiite authorities, most importantly Grand Ayatollah Ali al-Sistani, stood against it before parliament rejected it.

Many Iraqis blame political Islam for the tragedies and corruption plaguing their country, as the Islamists have held the reins of power since 2005.

In this regard, Wassim Sizif, a social activist and blogger, wrote on Facebook, “All the Iraqi militias that killed the innocents [in sectarian violence] came from under Muhammad Baqir al-Sadr’s cloak,” he wrote, referring to one of the founders of Shiite political Islam in Iraq and Iran. Sadr, in his book “Islam Leads Life” (1979), contemplated the idea of a velayat-e-faqih and provided a draft of an Islamic constitution to the revolutionaries who toppled the shah of Iran. The document became a source for the drafting of the Islamic Republic of Iran's current constitution, which indeed proclaims the rule of jurists, that is, velayat-e-faqih, and the primacy of Sharia law.

After the overthrow of President Saddam Hussein in 2003, Iran became a source of inspiration for Shiite Muslim parties in Iraq, some of which sought to implement the Iranian project in Iraq. The failure of the Shiite parties in favor of velayat-e-faqih in Iraq — the Badr Organization, Asaib Ahl al-Haq, the Islamic Supreme Council of Iraq and parts of the Islamic Dawa Party — in addition to the large numbers of Iraqis who took part in popular demonstrations against the government have put Iraqi Islamists in a difficult spot. Thus they have had to change their political discourse and pull back from pushing for the establishment of religious rule.

Sizif told Al-Monitor, “Shiite political Islam in Iraq is the loyal child of the velayat-e-faqih in Iran, and despite its failure to accomplish anything in development, the economy and security, it has excellent political experience in reincarnation [to remain in power].”

Sizif is critical of secular parties allying with Islamists like the Sadrist movement and PMU-affiliated parties. “It is an early suicide for the civil political movement, which could have been a very troublesome opposition to the Islamists in Iraq,” he said. “However, it seems that the civil movement believes that power is the only way to achieve change.”

Although eliminating Shiite political Islam from power in Iraq seems an impossibility in the near future — because of its influence in state institutions, its military presence in the form of the PMU and ongoing support from Iran — the decline in its popularity while in power and how strongly it is condemned by the religious establishment in Najaf suggest that it is unlikely to succeed in establishing an Iraqi velayat-e-faqih.