Are secularists, Islamists headed for confrontation in Iraq?

Following an attack against the Communist Party in southern Iraq, tensions escalated between Islamist forces and civil and secular parties. 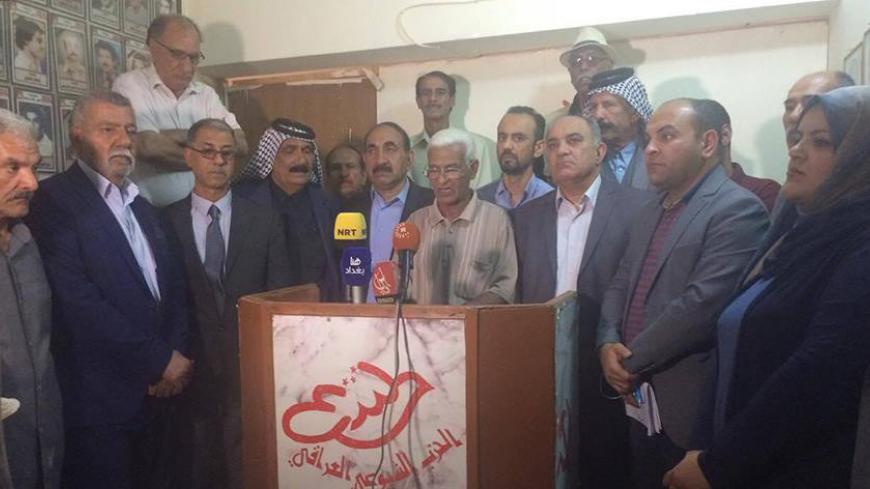 BAGHDAD — A recent anonymous attack on the Iraqi Communist Party office in Diwaniyah city is raising fears that animosity is intensifying between Islamist and secular activists.

At least two hand grenades were thrown into the party's office the night of April 10, causing no fatalities but significant material damage.

Although the perpetrators and the reasons behind the incident remain unknown, some observers link it to an attack earlier that day on students protesting at the University of Al-Qadisiyah by bodyguards of Qais al-Khazali, the head of Asaib Ahl al-Haq (League of the Righteous). The students had been chanting “Iran out, out” during Khazali's speech at the school when the guards fired their weapons. At least two students were injured in subsequent confrontations, an undisclosed Iraqi police source told Rudaw Media.

However, Mahmoud al-Rabihi, a spokesman for Asaib Ahl al-Haq, an Iranian-funded, Iraqi Shiite paramilitary group, blamed one particular student for inciting the incident. “The troublemaker student who was shouting these slogans is the son of an official in the Communist Party. His actions were planned and motivated by ideological principles and he crossed the line,” Rabihi said in an April 10 statement.

The statement sparked speculation that the university incident spurred the attack in Diwaniyah. That interpretation is an indication of the emerging conflict of armed and powerful Islamic parties against influential secular parties.

The Communist Party said April 11, “What happened at the university was a simple peaceful expression of opinion by the students. However, some wanted to involve the name of the Iraqi Communist Party in the matter. … A number of activists were tracked down and apprehended, including some communists, with attempts to force them to confess to something they did not commit.”

He added, “Some groups may escalate things in the coming period, but the political majority in Iraq will not play along, in my opinion. Yet we are expecting to witness propaganda to distort and harm the image of the civil and secular movements, and some undisciplined elements might act chaotically as a response."

Al-Monitor obtained a copy of a letter that Ali al-Jalihawi, the imam of the Mahdi Mosque in Diwaniyah province, sent to Asaib Ahl al-Haq to express his solidarity with that group regarding the university incident.

“There is a violent tendency placed by the devil in the hearts of some Muslims, especially young people affected by globalization and Western thoughts," the letter said. "There is a movement fighting the Islamic [reform] path and we cannot remain silent on this. We all need to stand up against [the movement] until it disintegrates and disappears.”

On April 1, the Islamic Euphrates TV channel of the Supreme Islamic Council had aired a documentary that mentioned a fatwa of Mohsen al-Hakim, the former highest-level Shiite authority, who declared communists to be infidels in 1960. The Euphrates channel is owned by his grandson, Ammar al-Hakim, the head of the National Alliance political bloc, which is predominantly Shiite.

Ahmed Abdul Hussein, a civil activist who studied at a Shiite seminary, published an article April 10 in response to the documentary. The article cited Ammar al-Hakim as making what Abdul Hussein said were insidious implications against communists during one of his political speeches.

Abdul Hussein told Al-Monitor, “The Islamic parties may have reached a dead end. Their basic principles will lead to their demise because they simply cannot accept others."

Abdul Hussein, who was one of the most prominent activists in the 2011 protests in Tahrir Square in Cairo, is a member of the Communist Party's Central Committee overseeing the party's alliance with the Sadrist movement. He also said, “The battle between secularists and Islamists [from] past years is starting to happen now. The Islamist parties believe secularists are a threat that have been acting in extremist ways, pushing an entire generation toward atheism."

Even at the societal level of Iraq's Islamic parties, people believe the secular movements seek to spread atheism and what they call “moral corruption.” They stereotype these movements and their followers as opposing Islamic Sharia.

The civil community in Iraq fears that once the Islamic State is driven out of Iraq, Islamic parties will begin restricting freedoms amid the spread of arms and chaos. They also fear some civil society figures will be targeted.

“Your battle is with yourselves and not with non-Islamist parties," Abdul Hussein said, addressing Islamists. "You need to reform your Islamic home."